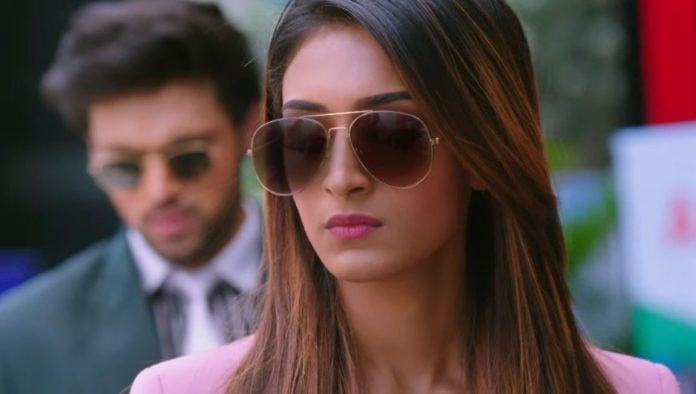 Kasautii Prerna to shock Anurag Revenge battle begins Mohini and Nivedita know about Anurag’s new project. Anurag tells them about a land auction, which he wants to win some how, so that they can make the most benefits from it. He wants to name the project as Basu city. Komolika gets miffed with Nivedita jokes on his plans. Komolika is sure that he will win the auction and make his dream project turn into reality. Anurag insults Komolika for being a shrewd planner and outdoing him always. She warns him by showing her dangerous side. He isn’t scared of him. He wishes that they never met.

She tells that she has taken the business to such heights, he should be grateful to her. Anurag goes the auction. Prerna too wants the same land to break Anurag’s dreams. She wants her revenge to begin. Mr. Bajaj is ready to get the auction delayed until she gets fine. She wants to get peace by defeating Prerna. She promises to reap benefits from the project. He feels much love for her, but is unable to tell her. He wants to be with her always like a silent pillar of support. He wants her to win in her goals. Prerna and Kuki arrive for the auction.

Other side, Anurag and Kaushik reach there. Anurag and Prerna have a hit and miss, which soon turns into a brief meet. Prerna knows his presence and avoids him. He doesn’t see her. She knows that he can’t fix anything in her life. She promises to take revenge and fix things in her life on her own. Kuki and Kaushik have light moments. She asks for her earring and blames him for stealing it. He returns the earring. She apologizes to him. They head to see the bidding. Komolika, Mohini and Nivedita want to watch the auction live and know the result. They already know that Anurag will win the auction, having no strong competitor.

Anurag gets overconfident that he will win. Anurag and Prerna participate in the auction. Mohini prays for his dream project. She wants Anurag to win the auction. Komolika proves that she is the Goddess for Basus. She asks Mohini to worship her and pray to her to get peace and prosperity. She makes Mohini her slave and insults her. Anurag faces tough competition from Prerna, who wins the auction for a shocking amount of 50 crores. He wonders who is the person representing KB company. He tries to know about her.

He realizes that she is trying to break his dream city by snatching the land. He then faces Prerna and is glad to see her. He just wants to protect her from Komolika. Prerna challenges to ruin Anurag. He pretends his same hatred for her to keep her away from his life. Prerna decides to snatch every single happiness from his life. He is ready to let her ruin him if she gets happiness out of it. He wishes her to be strong enough to face evil devil Komolika. He doesn’t want Komolika to frame Prerna in any legal case or attempt to kill her. Prerna will be meeting Anurag and her daughter, Sneha/Diya in the coming track.

Reviewed Rating for this particular episode: 1/5 LOOPED Revenge track
This rating is solely based on the opinion of the writer. You may post your take on the show in the comment section below.