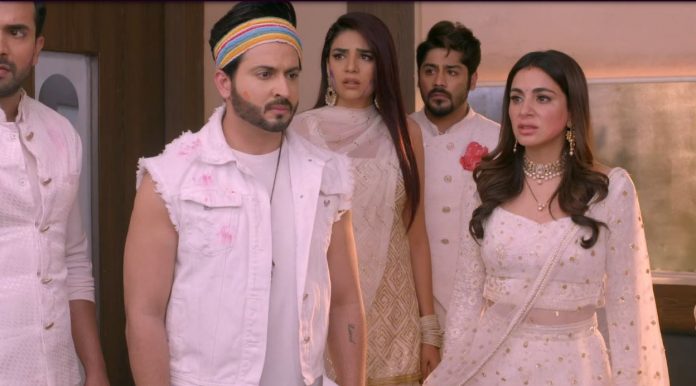 Kundali Lacking story Preeta accused Karan ends ties Preeta shouts on seeing Mahesh injured. She calls the entire Luthra family, who are much in shock seeing Mahesh critical once again. Rishabh asks how did Mahesh fall down suddenly when he was in his room. Mahira blames Preeta for pushing Mahesh down the stairs to kill him. Sherlyn enjoys the drama. Luthras get another shock with this blame. Preeta and Shrishti are trapped again by Mahira.

Sherlyn thinks Preeta’s entry happened at the right time and now the family will doubt on her. Karan is also in shock to see his dad hurt. Shrishti wants to defend her sister and calls Mahira a liar. Karan gets angry on Mahira for blaming Preeta once again. Mahira sticks to her words. Preeta finally defends herself that she didn’t do anything. Sherlyn lies to them that Preeta had taken Mahesh on the wheelchair. The family rushes Mahesh to the hospital. Sherlyn and Mahira want to kill Mahesh. Shrishti asks Preeta how did this happen.

Preeta wants her to go home to Sarla. Rishabh and Karan try hard to get Mahesh treated. They don’t find any surgeon. Preeta arranges the surgeon for Mahesh’s treatment. Mahesh gets treated in the OT, while Rishabh tries to give strength to the family. He wants the family to just pray for Mahesh’s recovery.

Shrishti doesn’t want to leave Preeta alone. Doctor tells Luthras that Mahesh is in critical condition. He breaks the news that Mahesh has slipped in coma once again. The same phase returns when Mahesh slips in coma and Preeta is accused by Sherlyn. Luthras cry for Mahesh. Sherlyn fills the family’s ears against Preeta. Preeta meets Mahesh and requests him to come out of coma at least for the sake of his needful family. She urges him to get up and come back to keep the family’s hope. She tells him that she knows that he fell down by someone’s conspiracy. She wants to find out who has pushed him down the stairs purposely to harm him.

She promises him that she will catch the culprit. Sherlyn doesn’t want Preeta to be with Mahesh. Mahira tells Sherlyn that the doctor is much talented and can really help Mahesh recover. They get afraid that Mahesh can come out of come state and expose their truth. Mahira tells them that they will take advantage of the situation. Sherlyn thinks Mahira has become much sharp and evil. Rishabh and Karan call Mahesh’s doctor to discuss the case. Kareena tells that she wants to take Mahesh home for his speedy recovery. Mahira lays a doubt in their mind that they can’t trust Preeta’s known surgeon. Sherlyn and Mahira accuse Preeta.

Shrishti asks them to stop the nonsense. She asks them to tell if anyone has seen Mahesh falling down. Mahira tells that none has seen Preeta pushing him, but Mahesh couldn’t reach the stairs on his own. Sherlyn tells that Preeta is behind the murder attempt. Mahira scares them that Mahesh is in danger and may die. Rishabh gets angry on Mahira. He doesn’t want Karan to come in Mahira’s words. Shrishti feels bad for Preeta. She wishes Preeta isn’t with Mahesh in the ICU. The family finds Preeta with Mahesh. Kareena reprimands Preeta. Preeta wants to know if Karan believes her or not. The same game of believe it or not begins again.

Rishabh supports Preeta like always. He shows unconditional trust on Preeta. Dadi, Kareena and Ramona blame Preeta for trying to kill Preeta. Preeta denies to hurt him. Sherlyn tells that Preeta has done this to stop Karan and Mahira’s marriage. Rishabh asks Sherlyn to stop her nonsense. Shrishti asks them to not blame Preeta without any proof. Ramona lies that she had seen Preeta pushing Mahesh’s wheelchair. Preeta tells that she wanted to help Mahesh. Karan’s fragile trust on Preeta breaks once again. This shocks Rishabh, Shrishti and Preeta. Sherlyn and Mahira get happy when Karan ends his relation with Preeta once again. 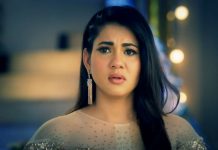