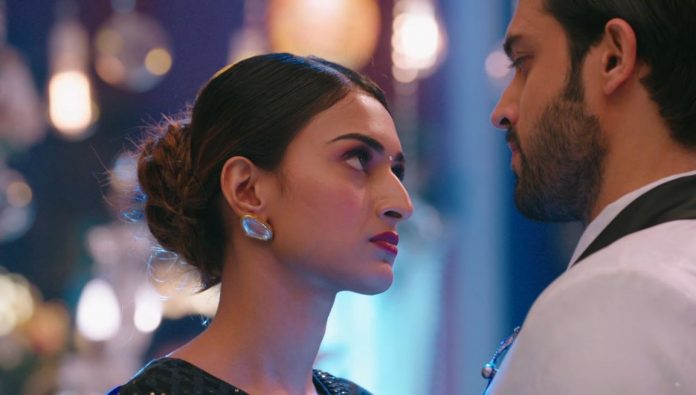 Starplus Kasauti Bajaj declaration Anurag Prerna tonight Komolika vents her frustration on Anurag to know if he had intentionally accepted defeat in the land auction just to make Prerna win. She tells him that if he has the same feelings for Prerna, then she will not spare Prerna and target her once again. She threatens him once again. She reminds him the evidence she holds against Prerna. She tells that she can make Prerna suffer.

He tells her that he didn’t give up on the deal, he didn’t know about Prerna’s presence at the auction. He asks her not to hurt Prerna, he is always with her to protect her happiness. He tells that he is happy to see Prerna successful and strong, happy with Mr. Bajaj. He doesn’t care for Komolika’s threatening.

Komolika realizes that he didn’t help Prerna intentionally. She lets him go and enjoy the party. She wonders how did Prerna become a strong and sharp person. She knows that Mr. Bajaj is backing her up. Shaumik is Anurag’s business partner. He also works for Mr. Bajaj and understands that Mr. Bajaj is interested in Anurag’s company. Mr. Bajaj wants to get Anurag’s shares so that he can gradually own the company. He tells that he won’t invest in the mall project without getting the shares. Shaumik conveys Mr. Bajaj’s proposal to Basus.

Nivedita and Anurag think about the offer. Anurag wants the investment for building the mall. On the other hand, Kuki and Kaushik get into their usual fights while trying to reach the party venue. Kaushik wanted to be there for Anurag’s sake. Kuki wanted to meet her dad at the party. She thinks Prerna is waiting for her. Komolika overhears about the deal. She tells Anurag that Mr. Bajaj and Prerna are tricking them to get ownership of Basu company. She tells that Shaumik is already working for Mr. Bajaj, once they sell the shares to Mr. Bajaj, Shaumik would also sell his shares and give the decision rights to Mr. Bajaj.

She doesn’t think Anurag should accept the deal. Basus agree with her. They are against Prerna. They wonder why did Prerna come back. Nivedita asks Komolika if things were not in her control that Prerna came back. Nivedita taunts her by getting the single opportunity. Komolika tells her that she has allowed Prerna to return, even when its against her wish. She doesn’t want to let Prerna come back in Anurag’s life. She tells Basus that she will never let Prerna cause trouble. Mohini wishes Prerna never returned. Knowing all the past incidents, she still favors Komolika. Mohini hates Prerna a lot. She feels Prerna is bad news for them always.

Tapur knows Anurag and Prerna loved each other a lot. She gets depressed to see them against in this manner. She never thought their terms will get so bitter. She thinks Anurag is concealing his feelings for Prerna. Anurag and Prerna come face to face. Anurag likes to see her as a strong person. Komolika feels Anurag can never be of Prerna. She plans to keep them away. Anurag tells Prerna that she is rigid to follow him always. He reminds that he tried to kill her. She tells that she didn’t forget anything, she has come back for revenge.

He insults her, while she gives him a patting reply. She tells him that her revenge will get the desired peace for her. Mr. Bajaj hinders their talk. He tells Prerna that she is handling Basus pretty well and is sufficient alone for her revenge motives. He is content that she didn’t break down emotionally. He tells her that he will be going back to look after his business. He wishes Prerna. He wants to share his feelings. She thanks him for always supporting her and making her a strong determined woman.

He reminds her that she has to deal with the people from her past. She tells that she has no emotional connection with them, her past wound will heal once her revenge gets fulfilled. Mr. Bajaj and Prerna have a dance. The pairs switch and Prerna gets to dance with Anurag. Anurag taunts on her dressing. She tells him that she hates red colour now. Anurag is hurt that she lost the colours of her life because of his cheat. Mr. Bajaj declares his love for Prerna and warns sternly Anurag and Komolika.