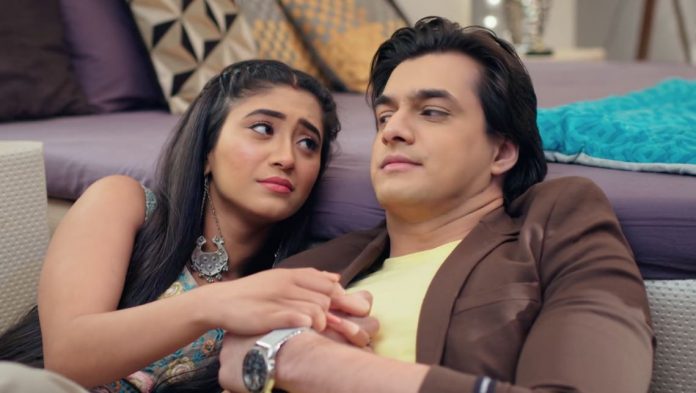 Starplus Shocker for Kartik Yeh Rishta mystery begins Naira realizes Surekha’s pain when her sons are taken to the remand home. Naira tells the family that she is feeling guilty, she didn’t mean to send Lav and Kush away, but she is helpless so that their lives get on track. She wants Lav and Kush to learn the right thing from their punishment and never commit anything wrong. She tells the family that she has been fighting with herself when she was fighting with the family, it was more tough to handle the inner conflict.

Kartik tells the family that he has seen Naira’s sorrow, even he wasn’t happy to send his brothers behind bar, but remembered his ultimate motive that’s to correct the wrong. The family asks them not to feel guilty, since they aren’t wrong. The entire family apologizes to Kartik and Naira for not understanding their perception before.

They also praise Kaira for always standing by the truth and not getting affected by anything. Dadi wants Kartik to make sure that Lav and Kush aren’t much troubled in the remand home. Kartik assures that he will meet them and check their stay. Trisha tells that she is going to the ashram. She is thankful to Naira for everything. The family wants to give some time to Surekha so that she comes to terms with the reality. Kartik supports Naira as always. Akhilesh pacifies a dejected Surekha. She is much hurt that she had to compromise with her fate always.

She tells Akhilesh that she accepted his affair truth, but she can’t accept the fact that her sons are sent to remand home. He tells her that he is also feeling sad for his sons. She decides to leave the house. Akhilesh tries hard to stop her. Kartik and Naira overhear her and come up with a plan. They ask Kairav and Vansh to become Surekha’s Lav and Kush for some time. Kairav and Vansh try to cheer up Surekha and ask her to accept them as her sons. Kartik pleads Surekha to not leave the house, since she has always loved him as her own son.

He reminds their old strong bonds and requests her. Akhilesh hopes Surekha changes her mind. Surekha finally gets convinced after Kartik and Naira’s emotional speech. Naira tells him that they always many difficulties in life, as if their fate already had it written. Kartik tells her that they will together cross all odds. She tells him that she is scared of their separation. He doesn’t want anything to come between them. He promises that they will never get separated. Kairav and Vansh find the family upset. They call the family and ask them to play holi. They ask the family to be happy and wait for Lav and Kush’s return.

Surekha plays holi with them. She apologizes to the family. She makes them forget the sorrow and celebrate. Goenkas play the holi happily and enjoy the games. Kartik and Naira are lost in each other.

Dadi tells them that she wishes Kaira always stay together, since they are the source of joy for Goenkas. Kartik and Naira enjoy the most. Their romance is seen after a long time. They play the holi romantically. Surekha gets emotional when Kairav and Vansh take Lav and Kush’s place in her life. Gayu gets stressed by Samarth’s strict behavior. He warns her against being careless and risking baby’s life. He tells that he will not tolerate if anything happens to his baby. Kartik and Naira plan to spend the day together.

Manish wants to make good memories with the family. He waits for Kaira and Gayu. Gayu suddenly falls down the stairs. She gets much hurt. Kartik and Naira happen to see her and try to help. Gayu asks them not to tell Samarth and family about her fall. She tells that Samarth is over possessive about the child and she can’t tell him anything as of now. She wants to be sure that her baby is fine. Kartik and Naira agree to hide the matter from Samarth.

Samarth wants to go along with them. Gayu makes excuses to get rid of him. Samarth gets stuck in his work. Kartik and Naira get emotional when they take Gayu to the same hospital where they had to depart with their newborn baby. They recall the time when they lost their daughter.

Gayu gets treated and is much worried to know about the baby. She is stressed thinking of Samarth. Kartik and Naira see the maternity ward and recall the moments when they lost the baby. They emotionally support each other. Doctor meets them and tells that Gayu is in much stress, which maybe harmful for her. She informs that Gayu and her baby are fine, but the test reports should be awaited. Kartik and Naira are asked to take Gayu home after some time. Naira doesn’t want the past memories to disturb her more. She goes out and sees the kids. She feels sorry to witness the painful memories. She thinks what’s in her destiny.

Kartik thinks to meet the nurse who had given him the bad news of his baby’s loss. He goes to find her. He learns about the nurse’s illness. He feels that she has helped him a lot and he should also help her now. He tries to get her contact details. He meets Naira and understands her feelings. They lighten their heart by crying for their big loss. He tells her that the baby was just like Naira. They get emotionally drained. Kartik tries to contact the nurse. He feels something is wrong that the nurse is avoiding his calls. He thinks what is the nurse hiding. Is Kaira’s daughter alive? Keep reading.