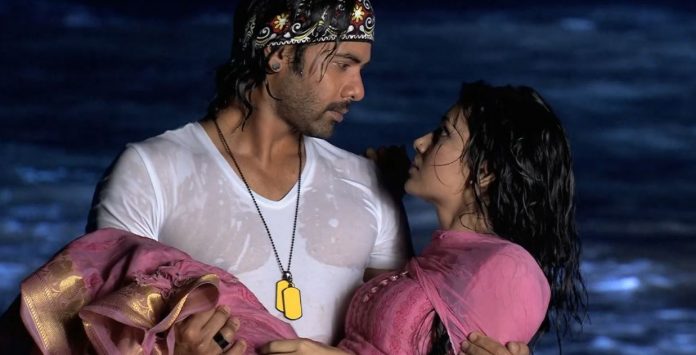 Kumkum Bhagya First meet Abhi Pragya rebound Pragya goes on the bridge. She recalls the moments with her would be life partner Suresh. She gets mistaken that Suresh likes her. She isn’t aware that Suresh is in love with her sister Bulbul. She thinks what’s happening with her, its the day she has been waiting for. She doesn’t know how to react.

She is happy that Suresh has confessed his feelings. She thinks the stars will change their position and bring good luck for her. She prays that the person made for her always supports her, the happiness she deserves comes in her life. She wants the fate to bring the person, who ends all her fears, who makes her forget the world.

She wants to be with the person she loves, who holds her hands forever. She is much romantic kind of a person. She wants to be drawn to that person, connected to her Bhagya. The same instance, she falls down in the river. She doesn’t think she will survive. Luckily, Abhi reaches there in time and saves her life. He brings her out of the river. They have an eyelock with the iconic song Allah Waariyan playing in the background. Abhi asks her if she wanted him to never leave her alone, if he gets drawn towards her. He tells that he has come for her sake, he can see his future in her eyes. He promises to always support her.

He tells that he forgets the world on seeing her, he will never let her go away from him, he loves her a lot and can bring her back even from the stars. The shooting star fulfills their wish and makes them bound by the same Bhagya. Pragya realizes that she isn’t the model. Abhi was shooting for the ad and asks about the model. He asks if Pragya had come for committing suicide. He asks her if she has any problem because of her boyfriend or in-laws, or if she has a crush on him. Pragya asks him to leave her.

He drops her down and then realizes that he could give a media byte after saving that girl. He goes to give the interview. He boasts that he has saved a girl who committed suicide. Pragya thinks he is a natural actor and has huge fan following. She really believed his love confession. She wants to meet him again and thank him. Abhi takes benefit from the situation. Pragya thinks if her wish is fulfilled, if this guy has any role in her life. Abhi and Pragya’s Kumkum Bhagya gets eternal.

Reviewed Rating for this particular episode Kumkum Bhagya First meet: 5/5
This rating is solely based on the opinion of the writer. You may post your take on the show in the comment section below.