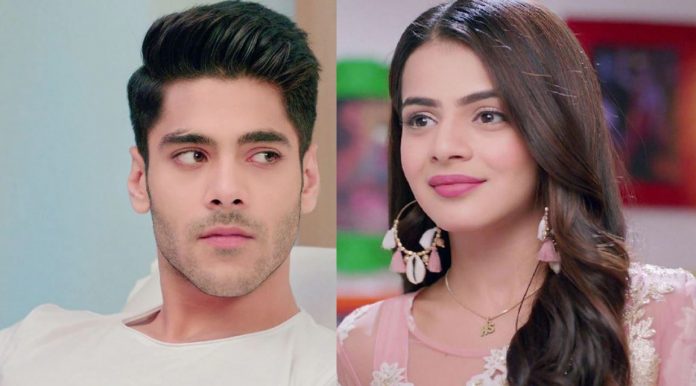 Shakti Colors Latest Lockdown Heer Virat love story Virat and Heer get separated by their families first and then by the lockdown. They have a video chat online and share their feelings for each other. Virat tells her that she is the best wife and has proved it again and again.

She shows the special roti prepared for him. Virat tells her that though they have to stay away because of the lockdown, they will not take this situation as a big hurdle in their life. He is sure that the situation will change soon for their betterment. Heer and Virat then recall their college days, where they got into a big tiff.

They laugh on their past bitter quarrels. Virat had complained about Heer to the college teacher. He failed to prove that Heer is interested in him. Heer and her brothers get angry on Virat who wanted to prove Heer’s crazy love. Heer played it smart and didn’t write on the greetings. Soham wanted to bash up Virat. Heer teases Virat. He understands that she is just playing around innocently. He tells her brothers that she is much clever, they are unaware of her truth. Virat gets helpless and vents anger on dumping the greetings given by Heer.

Heer wanted to wish him birthday and make him smile, like a cute romantic hero does, but Virat got much angered instead. She gets confused about his real personality. Virat gets a surprise when his mum comes to the college to wish him on his birthday. His mum wants to keep Heer away from him, after recalling Preeto’s taunts. She finds a chance to insult Preeto on seeing her bargain with the vegetable vendor in the market. Preeto gets to see her rich attitude and answers her back.

Virat learns about Preeto and his mum’s clashes. Virat and Heer meet again to sort out their clash. Heer supports Preeto and calms her down. Virat also tries to end the fight. His mum doesn’t listen to him and calls the cops. Virat boasts of his family’s power and richness. He doesn’t want his mum to embarrass him. Soham also asks Preeto to teach a lesson to the lady. The cops arrive to sort the matter. Virat’s mum asks the cops to explain the road rules to Preeto. Preeto turns the tables by showing her attitude.

Virat supports Preeto and calls his mum wrong. Heer supports Virat’s mum and calls Preeto’s stubbornness wrong. Preeto is forced by Heer to go home. Heer and Virat realize that they always support the right. Heer gets clear that he is a nice guy. He finds her sensible for the first time. Heer then decides to send a birthday gift for Virat to make his day. Virat gets wishes from his dad. Virat looks dashing and receives many compliments. The kinners arrive in the birthday party to bless the birthday boy.

Dadu welcomes them happily.Virat pays them respect and gets blessings. The kinners’ presence irks Virat’s mum a lot. His brother Daljeet angrily asks the kinners to leave if they are done. Dadu apologizes to the kinners and wants them to bless Virat well so that his life always had happiness. Shanno supports Heer and Virat’s love story.