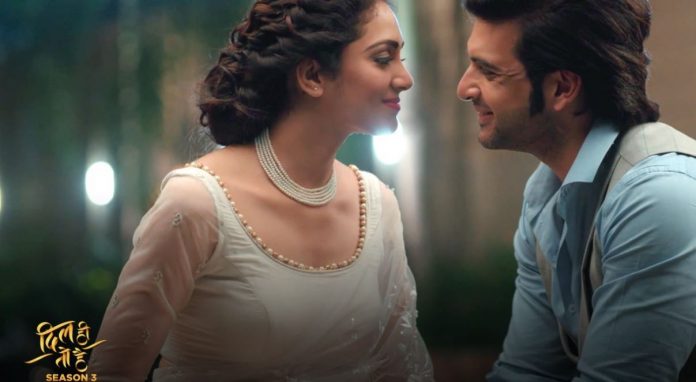 Dil Hi Toh Rithvik Palak Vikrant past revealed Episode 2 Palak gets helpless to her heart. She imagines Rithvik once again. She wanted her love story to end on ‘live happily ever after’. Rithvik doesn’t want her to read fairy tales. He tells her that she looks really stunning. She gets too upset that he isn’t with her. He cheers her up and doesn’t think that the sorrow should matter to her.

She tells him that he matters to her a lot. He tells her that love isn’t easy, love always takes tests. She misses him deeply. Vikrant supports Palak as a friend. The family has gone through a lot in these two years, since Rithvik slipped in coma. Vijay and Mamta break down on seeing Rithvik staying lifeless in the state of coma. Palak fails to tolerate this truth. Rithvik and Palak’s daughters also get into trauma because of the accident.

Noons also suffer in business. They were afraid that Noon biotech will be ruined and didn’t care for the losses. Vikrant had managed Noons business and also the family. Vikrant keeps the family united and takes Rithvik’s place perfectly. Vikrant loves Palak, and agrees to become the savior for Noons just for her sake. He had brought out Palak and her daughters out of the trauma, and also managed the company. Riva thinks of the past, where she was compelled to think practically for the sake of the family. Back in flashback, Riva thinks Palak should marry Vikrant. She tells Aman that they shouldn’t fool themselves and get Palak married to Vikrant.

Palak happens to overhear them. She then learns about Vijay selling Noon house. Noon and Mamta cry and decide to sell the house to pay for the losses. Riva doesn’t think Palak deserves a painful life. Vijay and Mamta agree with Riva and ask her to move on in life by marrying Vikrant. Vikrant happens to witness the alliance talks. Palak gets disturbed and doesn’t give her nod. Everyone leaves the hope that Rithvik will come out of coma. Palak tells Vikrant that there is no one in her life except Rithvik. Vikrant understands her sacrifice. He doesn’t compel her. She then makes another sacrifice for the sake of the family.

She marries Vikrant just to keep the Noons united and stable. Palak apologizes to Rithvik and tells him that she can’t make him go away. Vikrant tells her that he has married her just for the sake of Jia and Dia. He doesn’t want Palak to feel forced. He tells her that they will remain good friends and he will never force his love on her. Back to current, Vikrant gifts diamond earrings to Palak. She wants him to gift it to Mamta, since its Mamta’s anniversary. Vikrant continues to put efforts. Riva asks Vikrant about his one-sided love. Vikrant is happy with his one-sided love, which never starts and never ends.

Riva asks Palak to accept the fact that Rithvik will never come back. She wants Palak to value Vikrant, who has stabilized the Noon family. Palak doesn’t want to move on. She is sure that Rithvik hears her every day when she talks to him. She loves Rithvik and can’t give his place to Vikrant. She is sure that Rithvik will come out of coma. Rithvik’s condition gets worse. Shivam doesn’t like Vikrant with Palak. Ananya asks him not to care about destiny. Vijay and Vikrant have a father-son moment. Palak wants Vikrant to tell Vijay about Geeta’s truth. Vikrant tells him that Geeta doesn’t want the truth to be known.

Noons get unreachable, being busy in the party. Rithvik gets sinking. Palak gets into Rithvik’s memories once again. She knows that they have united not to face separation again. Rithvik wants her to remember that they will always be connected through the sky. She tries to get hints about Rithvik’s words. Vikrant finally answers the call from the hospital. He learns about Rithvik’s critical state. The family rushes to see Rithvik. They get to see him and realize that his survival hopes are falling flat. Doctors ask him to let go of him to free him from the pain. Noons get into much pain and can’t let Rithvik die.