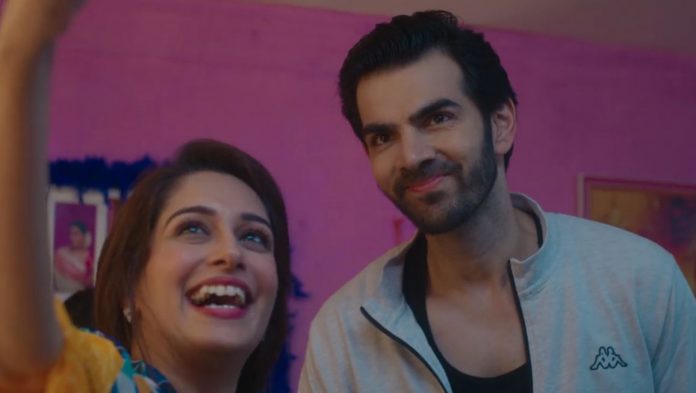 Ronakshi on Starplus Kahaan Hum after Iss Pyaar Kahaan Hum Kahaan Tum is soon going to return on Starplus for the viewers during the lockdown period after Iss Pyaar Ko Kya Naam Doon Season 1 started airing. Netra gets troubled by Sumit, who threatens of quitting the show, since the entire episode was focussing on Sonakshi this time. Sumit wants some attention too. He tells him that she can’t make Sonakshi take over the entire episode. He is quite frustrated. Netra asks him to come on the sets tomorrow and talk peacefully. Rohit gets a nightmare, where he finds Sonakshi removing a patient’s heart in another hilarious way. He vents anger on the staff who worship Parvati.

He wears his jogging suit and goes for the jog. He feels strange to sight Parvati. He wonders how everyone watches the show everyday. He comes across some ladies who praise Sonakshi’s character Parvati for being a super hero. He stops himself on the way to justify a doctor’s duty. He tells them that Parvati can’t make a dead man alive without any medical knowledge, she is also a common person, who can’t do miracles like that. He asks them not to watch the show, else they will get mental illness.

The people call him mad. He doesn’t want the nation to go mad after watching senseless shows. Rohit rushes home and asks the driver to take him to the shooting sets once again. Sukhmani learns about Rohit and Parvati’s story. She gets a laugh. Ajit asks her to get Rohit married soon. She tells that Rohit is worried about the new wing inauguration and they are in talks with Sonakshi for the event. Yash speaks to Suman to hire Sonakshi for the event. Suman wants to charge much for the event. Yash and Suman bargain to settle at a low amount. Nishi wants to know if tv actress Sonakshi is coming. Yash wants elders to handle Rohit.

Nishi tells Yash that she will make Suman lower the amount further. She tells that Suman is also her client, she had come for face lifting last week. She wants to save more money by fooling Suman. Meanwhile, Rohit reaches the sets and awaits Sonakshi. Sonakshi lands up and rushes for the shoot. She gets blocked by Sumit and doesn’t pay respect. Rohit learns that Sonakshi has arrived. He goes to meet her. Sonakshi clicks a selfie with Rohit to send to his mom. He gets amazed seeing her. She makes him smile for the picture. He tells her that he has come to talk to her, something really important. Rohit asks him to wait for some time until she gets free.

On the sets, Sumit creates a scene and troubles Netra. He refuses to work with Sonakshi, who has shown much arrogance. Netra thanks him with a pleasing talk. She tells him that he has saved the show like always. Sumit tells that he respects her and came for her sake. She wants to fire him if he troubles more. He keeps his condition that he will finish the scene with Sonakshi’s duplicate. He threatens of leaving the show once again. Netra reaches Sonakshi to reveal about Sumit’s tantrums. She knows Sumit is jealous. She wants Sonakshi to go for the dubbing. Sonakshi wants to meet Rohit, who is waiting. Netra asks her to not stall the work.

Sumit gets into his character of Kunal. He convincingly gives the shot with the duplicate. Rohit reaches there and thinks its Sonakshi with Sumit. He stops the shoot and calls it sheer nonsense. He tells them that Parvati can’t make her dead husband alive. He wants to know how did she do this without simple common sense. He accuses the show makers for teaching wrong things to the people. He asks them not to mislead the people by such scenes.

The duplicate gets worried to face Rohit. Rohit wants Sonakshi to turn towards him and talk. The duplicate gets helpless to turn. Rohit is much shocked to see a man in Sonakshi’s character. He finds it bigger fraud to cheat the audience this way by using duplicates. Sumit enjoys the drama on the sets. Sonakshi arrives and stops Rohit from creating a mess. Rohit asks her about her fake world.

He tells that she is cheating the industry. She wants him to know about her industry before speaking wrong. She keeps calling him a doctor, while he corrects her that he is a heart surgeon. She tells him that tv actors entertain the people and make them forget the stress by their drama. She tells that he cures the heart and she fills in hope in the heart. She justifies her profession. He likes her long dialogues. She doesn’t think there is any harm in keeping the audience happy. Rohit gives expressions as if he is understanding her.

He asks if she has got the lines written by someone, if she has worked hard to memorize it. He calls her a fraud actor. She calls him heartless. Rohit turns too angry on seeing Sonakshi’s poster. He calls her an idiot and finds her having no knowledge about medical science. He makes a man delete his video, clearing that he will never become Parvati’s fan.