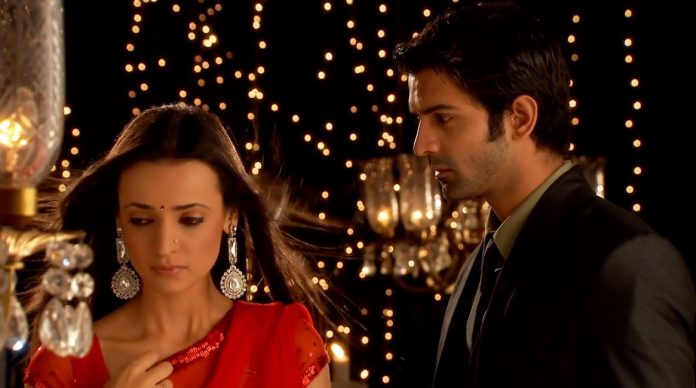 Arnav loves Khushi IPKKND in this very moment Arnav demands Khushi to become the model for his shoot, since she has turned Lisa upset and became a reason for Lisa’s sudden leaving. He asks Khushi to clarify if she wants. Khushi clarifies that she has tried enough to convince Lisa. She has already got much insulted by Lisa. She thinks Arnav has hired losers.

Lavanya wants Arnav to come up with an idea for their Indian look women calendar. Arnav thinks Khushi would be modelling now, which will be a punishment for her. Khushi doesn’t want to model. The director also complains about the delay. Arnav tells Khushi that she should get ready in no time. Manorama asks Anjali to get ready since her husband is coming. Nani invites the relatives home for the puja. She asks Anjali to call Arnav home.

Arnav asks Khushi to wear the short dress and come. Khushi refuses, but is left with no option. He asks her to better quit the job if she is ready to rebel. Khushi has never worn such short dresses in her life. Arnav tells her that she has ruined his fashion show even in Lucknow. He tells that he would have never tolerated her if he didn’t make the contract. He wants her to just finish the work. Anjali and Nani learn that Arnav won’t come in the puja. Anjali is really delighted that her husband is coming. Nani tells her that its good that the family men are workaholic.

Meanwhile, Shyam gets a pendant for Khushi. He hides it from Bua ji. He has to soon leave for home. He makes excuses. Bua ji suspects that he is hiding something. Shyam lies to her. He tells that he will come back soon. Bua ji wants him to return soon. He tells that his heart will bring him back. He packs his stuff to leave. Khushi gets in a big dilemma. She calls home to speak to Payal. Shyam tells her that he has arranged the surprise party for Payal. He tells that Bua ji was also praising her. Khushi loses courage to tell him the problem. She thinks to not quit the job if it means so much for the family.

He asks her to get some sweets while coming home. He tells that he is leaving for some work. She asks him not to go on the same day, since she is stuck in work at her office. She apologizes to him. She seeks her help. He assures that he will stay back and solve her problem. She is grateful to him. Shyam cancels the trip to home on her request. She doesn’t want to break everyone’s hopes by leaving the job. Anjali goes to welcome her husband home.

She gets upset when she learns that he isn’t arriving. Khushi shocks everyone by wearing a saree, instead the short clothes. She gets insulted by Lavanya. She tells Lavanya that she can’t wear the revealing clothes. She wants to keep her modesty.

Lavanya asks her not to teach her the fashion trends. The director tells that Khushi is right, since her look is describing the Indian woman. Akash is impressed with Khushi. Khushi models for the shoot. Arnav gets stunned to see her beautiful avatar. He is left mesmerized. Khushi gets to see her arrogant boss staring at her madly. She gets confused too by his expressions. Its a Rabba ve moment for Arnav and Khushi. Lavanya complains to him about Khushi. She tells that Khushi wants to ruin their calendar shoot.

Arnav reminds Khushi about the western dress. Khushi doesn’t listen. The director suggests that Khushi would look better in the Indian traditional avatar. He tells that Arnav can decide it himself. Akash also agrees that the traditional look will be better. He wants the shoot to give the message that they are still rooted to their traditions. Arnav changes his decision just to get the work done on time. Khushi wants to go home for Payal’s birthday. Arnav doesn’t allow her to leave.