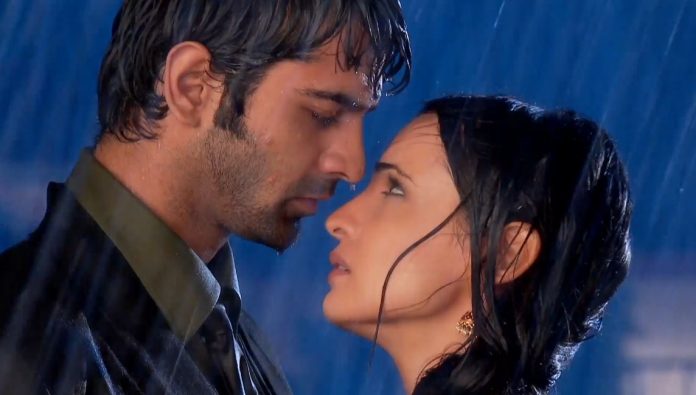 IPKKND Romance Starplus Today Arnav Khushi Twists Season 1 Episode 23 Khushi thinks she doesn’t belong in ASR’s office. She sheds tears of sorrow after recalling the humiliation from Arnav. Akash tells her that Arnav doesn’t even spare him when he does some mistake. He consoles her. She tells him that she has apologized for her mistake and even then Arnav punished her.

She asks him to scold her too. Akash tells her that she will always remain the same, she has dared to counter Arnav’s anger, she has succeeded in her aim, no one could ever oppose Arnav. Khushi tells him that she will handle her work. Bua ji calls her to yell at her. She wants Khushi home. Payal gets worried for Khushi, who would never get late deliberately. Khushi fails to explain the situation to Bua ji.

On the other hand, Anjali gets upset when her husband doesn’t come home on the said time. She cries that she couldn’t meet him. She didn’t wish for the delay. She gets her husband’s call. She tells that she had been waiting for him, but its fine if he is stuck in the work. She asks him to take his time. Nani and Manorama feel bad to see Anjali crying. Anjali tells them that she will be performing the puja alone. She stays upset. Manorama finds a way to console Anjali. Manju offers help to Khushi. Khushi wants to go home as soon as possible.

She wants to take Arnav’s permission. The guests taunt Anjali for staying in her Maayka even after her marriage. The lady asks Anjali to call her husband home and go with him to his house. Nani gets angered up, but stays silent. Manorama answers the guests to defend Anjali. She doesn’t want such guests home who would hurt the family members’ heart. She questions the lady about her daughter’s marriage. She insults the lady to send her away. Nani is impressed with Manorama for the first time when the latter consoles a dejected Anjali. Manorama tells Nani that sometimes they have to answer the outsiders in that way.

Meanwhile, Arnav seems to be lost thinking of Khushi’s stunning beauty and also her tears, which affected his heart. Lavanya tells him that she wants to spend time with him. Khushi finds them in a moment and misunderstands him. She wants to ask him if she could leave for home. Lavanya yells at her for breaking their moment. Arnav too fumes and gives another task to Khushi to delay her leaving. He asks her to learn some manners. He gives her an impossible task of parking a client’s car in the parking lot.

He asks her to do the task if she has to earn the money. He scares her of the penalty amount. Khushi thinks she is working overtime, since the office hours are over. He asks her to supervise the security and manage the parking lot. He asks her to resign from the job if she can’t stay back. Khushi is again in a dilemma. She hopes that Shyam stays back home and celebrates Payal’s birthday on her behalf. Manorama doesn’t like the spicy dish prepared by Anjali.

Anjali tells that she had prepared the dish for her husband, but he didn’t turn up. Manorama praises her culinary skills. She feeds the food to Anjali too. Nani gets touched seeing them. Payal tells Bua ji that Khushi isn’t answering the calls. She thinks its too late. Bua ji doesn’t want Khushi to give her shocks. Khushi handles the parking lot, which isn’t any usual work for her. It starts raining. Arnav gets heartless towards Khushi. She continues to work in the rain. Khushi calls up home and fails to connect. Shyam asks Payal if Khushi has come. He finds Payal and Bua ji worried. He tells Payal that he will go to find Khushi.

Arnav leaves for home with Akash. He finds Khushi working in the rain. He thinks of her determination, which is very unlikely quality in his staff. He thinks she is really different. Akash also thinks she is sincere in her work. Arnav’s heart starts to melt for her, seeing her shivering in the rain. The client meets Arnav. He sympathizes with Khushi.

He asks Arnav to free her from the work, since its against work ethics. Arnav thinks he has really crossed the limit this time. He keeps his pride and walks away. He then returns to save Khushi from a speeding car. Arnav hugs Khushi and feels for her, but unable to accept the feelings. Khushi can’t believe that Arnav has saved her. Their love story finally begins.

Reviewed Rating for episode 23 IPKKND Romance Starplus Today Arnav Khushi Twists: 5/5 The show was in the Star plus Schedule at 5 PM IST. It got replaced by mythological show at that slot. Currently, the 12 Am slot airs Iss Pyaar Ko Kya Naam Doon Season 3 as per the schedule.
This rating is solely based on the opinion of the writer. You may post your take on the show in the comment section below.