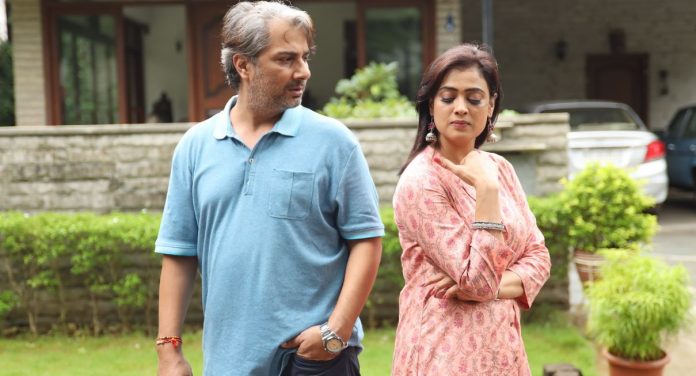 Sony Lockdown Rewind Amber Guneet Dad Ki Dulhan Guneet gets to stay as a tenant in Amber Sharma’s house. He wants to spend his day like he wants. Guneet wakes up early and starts preparing breakfast for her mother. He gets too disturbed by the noise. He puts on headphones. He wants to find some peace in the house. He gets hindered in his aim to get peace by Guneet and Pammi.

He thinks if he has done wrong by getting strangers home. He throws his annoyance around in his own way. The only relief in his life is Nia. He tells her that she is really good, unlike other women, who are too irritating. He tells Nia that though she has ten flaws, but she is still a nice person. She understands that he is troubled by Guneet. Amber tells Nia that he has got clocks online to match up with her USA time.

Nia asks him to check global time on his phone. He is emotional about Nia. He tells her that he will not call her often to disturb her during work. Nia teases him by telling that she will go on many dates. He tells that he will break her legs if she dares to date anyone. She pulls his leg. She knows he is super sweet. Guneet gets to see their lovely bond. She likes Nia’s cheerful laugh. She also gets a smile on seeing them. She doesn’t have similar bond with Pammi.

She gets ready for her job. She gets into an argument with Pammi. She doesn’t want Pammi to fight with Amber. Pammi wants to befriend Amber, knowing his house is the only option for their stay. Guneet fears that Pammi will spoil the matter further. Nia and Kabir get into an odd moment after she gets his sweet proposal. Kabir thinks nothing can happen between them. He wants to be Nia’s good friend. Nia and Kabir try to break the odd moments. Pammi invites the neighbors without informing Amber.

Guneet returns home and is surprised by Pammi’s move. Amber gets upset to find the neighbors chilling out in his house. He doesn’t like the house of inviting people and creating a mess. Amber gets rude towards them. Nia and Kabir try to talk and sort out things. They apologize for the weird behavior. Nia doesn’t think Kabir is at fault. Amber doesn’t want neighbors to say that Guneet has changed his life. He can’t tolerate the weird comments. He asks the neighbors to leave. He gets to see his lovely kitchen messed up.

He tells Guneet that he lost his parking as well. He fights with Pammi. Guneet takes Amber’s side when Pammi seems wrong to her. Amber’s principles irk Pammi. Amber tells Guneet that he will not tolerate any outsider in his house. Pammi blames Guneet for siding with Amber. Nia arrives home and witnesses Amber and Pammi’s harsh fight. Pammi tells that Amber will leave the house and she will acquire it. Amber tells that he won’t go anywhere.

Pammi tells that when he goes to USA with Nia, then they will be taking the total house area for rent. Nia and Guneet try to handle the matter. Nia wants to tell Amber the truth. Amber tells Nia that they will fight and not lose the house to clever women. Nia asks him if he is afraid of Guneet. He gets provoked. He wants to throw out Guneet and Pammi. Nia tells Guneet that they shall not keep any secrets. She takes Guneet to Amber.

Guneet comes up with a clarification. He calls Guneet a big liar. Guneet tells that she has lied for the sake of Pammi’s happiness. He doesn’t think that she is saying the truth now. He is angry that she made Nia lie to him. She admits her mistake and apologizes. Amber wants his right to throw out fraud people from his house. She then scares him of filing a court case on him to get tenant’s rights. He doesn’t want her to threaten him. Guneet promises that she will never leave his house.