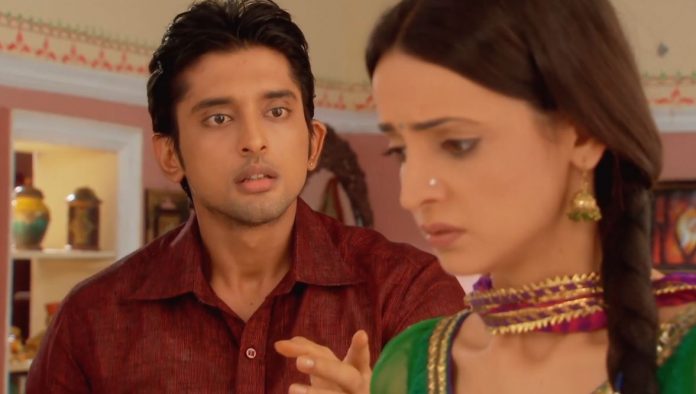 Starplus Khushi Shyam love angle IPKKND Upcoming Nani shocks Arnav by getting an alliance for his marriage. She tells him that Vidya is a nice girl and he should consider her. Arnav asks Anjali about Vidya. Anjali and Akash have no idea about Nani’s plans. Arnav refuses for the marriage straight away. He asks the girl and her family to leave, since he will never commit for the marriage. The guests leave. Nani turns upset.

Arnav apologizes and clears out that he isn’t keen for marriage. He doesn’t think he is doing wrong. He doesn’t want to do injustice with the girl. He tells her that she has taught him not to do anything wrong. He wants to decide for his life. He wants to live his life by self decisions. Nani gets silent on hearing him.

On the other hand, Bua ji continues to praise Shyam. She tells Shashi that Shyam is very helpful and supportive towards Khushi. Shashi wants to visit his daughters. Bua ji is worried for the expenses. She promises that she will not let Khushi go for the job.

Meanwhile, Khushi gets surprised when Shyam brings the special breakfast for her. She gets happy and sits to dine with him. Shyam is happy to see her cheerful again. Shyam tells Khushi that she shouldn’t go for the job, sometimes person just ends up regretting.

She wants to know what does he mean. She asks him to be clear of the matter. Shyam tells her that she shouldn’t make any mistake. Bua ji asks Shyam not to spoil their habits, if he goes away, then it will be tough for them.

Bua ji gets pleased when he tells that he isn’t going anywhere. Khushi wants to go to her office. Payal asks her to inform Arnav that she is leaving the job. Later, Nani gets angry on Arnav’s decision. She tells Anjali that no one cares for her. Anjali calms her down and promises to speak to Arnav. Bua ji tells Khushi that she has told everything to Shashi, and even he doesn’t want her to go to her office.

She tells that she has scolded Arnav a lot and now he won’t spare her if she goes back to the office. Payal asks Khushi to just make a call and inform Arnav. Khushi tells that she doesn’t want to run like a coward. Payal doesn’t think people’s thinking matters to them. Khushi is worried for the contract. Payal doesn’t care for it. She just wants Khushi fine. Nani tells Anjali that she will get Arnav married to the girl of her choice.

Anjali tells that they will calm Arnav first and then speak of his marriage. Nani agrees with her. Shyam tells Khushi that Arnav will not take any action against her, Arnav is torturing her, its not any work. He tells that he will handle her contract, she doesn’t need to go there again. He feels guilty to send her there. Payal tells that Arnav is at fault.

Payal wants Khushi’s safety. Manorama wants a rich bride for Akash. She wants her status to get better. Akash learns about Manorama’s expectations. He doesn’t want to marry any rich girl. He thinks of Payal, whom he falls since the first sight. Khushi looks for something in her purse. Payal tells her that even Shashi wants her to quit the job. She tests Khushi’s love for the family. Anjali finds Akash upset. She tries to know what’s bothering him. Akash tells her that so many things are happening in the house. He tells that money doesn’t matter a lot. He asks if a person’s heart doesn’t matter.

Anjali tells him that person should be clean hearted, money doesn’t matter at all. She tells that even her husband is middle class, but he is still so loving that he has won over the entire family. She asks Akash to value the person’s qualities. Khushi tells Payal that she will go to the office to give her resignation. Payal and Shyam get glad. Khushi tells that she will face Arnav for the final time, since she is right and not afraid of anything. Bua ji realizes that Shyam loves Khushi, and thinks to get them married.

Reviewed Rating for this particular episode Starplus Khushi Shyam love angle IPKKND Upcoming: 5/5
This rating is solely based on the opinion of the writer. You may post your take on the show in the comment section below.