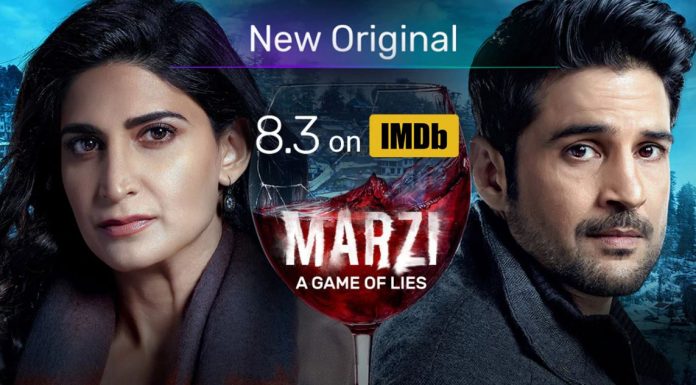 Voot Marzi Rajeev Khandelwal Aahana Kumra Starrer The tale around two individuals, Sameera and Anurag. A 30 year old girl, Sameera meets Nitin after her cycling course. Nitin returns the keys before making a move out of her house. She returns his gifts. She didn’t wish to end their relation this way. She breaks up with her fiance. She doesn’t want him to visit her again. She feels he was just fine as a friend.

On the other hand, a forty plus man, Anurag keeps a watch on his 16 year old son. He drops his son to his school. He feels he has many more duties as a father. He goes to pass the lunch bag. He comes across Sameera, who works as the teacher there. He tells about his son Ayaan. He wants to know if she is fine after the breakup. He likes her a lot, and expresses it as well. He asks her for a dinner date. Sameera laughs at it first and then agrees. She takes the lunch bag to Ayaan.

Sameera also thinks she should go ahead in life with the heart surgeon, Anurag. Anurag undergoes the sessions to de-stress and let go of his wife’s death. Anurag and Sameera’s common friend Sangeeta brings them together. Sameera tells her sister Sangeeta that she wasn’t in love with Nitin. Her friend asks her to move on with Anurag, who is a real gem. Sameera meets Anurag on their dinner date. He compliments her stunning looks. They introduce themselves once again. The dinner date goes on well. The night passes. Sameera forgets the entire night events. Anurag is thankful to her for giving him a good memory.

He tells his friend that though he misses his late wife Barkha, he found Sameera a really nice girl. He likes her a lot. Sameera doesn’t remember if something happened between them or not. She feels creepy with the feeling of the blackout. She goes to Sangeeta and reveals about her doubts. Sangeeta asks her if she was hallucinating. Sameera accuses Anurag for raping her. Anurag isn’t aware of Sameera’s opinion about him. Sameera tells her that she didn’t give her consent to Anurag. Sangeeta asks her if she is taking her medicines or not. She trusts Anurag, who is her colleague at the hospital and also a good friend.

Sameera wants everyone to go and question Anurag. She gets miffed when she gets questioned. She accepts that she is wrong to get over drunk and lose control. She decides to go t the police and report the rape case against Anurag. Anurag plans to meet Sameera again. He messages her and hopes for her reply. He recalls the night, when he shared his likes and dislikes with Sameera, while having a walk with her.

Sameera goes to the police station to report against Anurag Saraswat. Inspector asks Sameera to undergo the medical tests. Sameera has no proof against Anurag. She doesn’t remember anything either.

She tells that she didn’t fight with Anurag. Inspector criticizes her. Sameera wants them to believe her. Sameera undergoes the medical tests. Doctor confirms that there are no signs of assault. Sameera shouts that her consent wasn’t there. Doctor also criticizes Sameera for false accusing a decent doctor for the crime. Sameera seeks justice once again. The police goes to see Anurag. Anurag is shell shocked to know about Sameer accusing him for rape. Anurag can’t believe this. He can’t understand why Sameera would take this step.

He accepts that he went on a dinner date with Sameera. He is taken to the police station for the interrogation. Sameera goes to Sangeeta’s house. She stays disturbed. Sameera slowly gets flashes of the night. She had taken Anurag to her house for a drink. He had made the drinks for them.

Anurag narrates the night’s incidents to the police. Inspector asks Anurag to give them the complete details. Anurag admits that he got intimate with Sameera with her consent. He tells that he didn’t force Sameera. He wants the police to believe him. He pleads his innocence. Sameera tries to stay busy in her work. Anurag treats his son as his responsibility.

He asks Ayaan to just go to the school on time. He fears that his son will get to know the cheap accusation on him. Sameera yells at Ayaan in anger because of Anurag. Anurag meets her at the school and asks her if she really thinks that he has hurt her dignity. Sameera vents anger on him. He tells her that she had given her consent to him. She doesn’t want to listen to him. She contacts Nitin for a meet. She shares about the incident with him. Nitin tells her that they are still friends. He warns her against going ahead with the case, since it will defame her.

Sameera then meets the police, who tells that the investigation is still underway and Anurag can get arrested if the crime is proved. Sameera realizes that Anurag had drugged her, since he is a doctor and knows about drugs well. Sangeeta doesn’t judge Sameeera well and misunderstands her. Sameera wants to expose Anurag in the community. She publicly makes her voice reach out on the social platform.