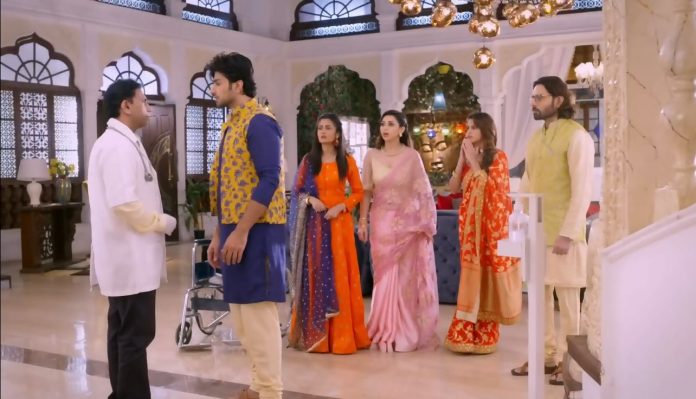 Guddan Shocking news for Akshat 16th July 2020 Guddan forgives Ganga who had a miscarriage. Durga tells Guddan that Ganga is wrong and deserves this sorrow. Dadi asks Ganga to realize her mistake. She tells that Guddan has a heart of gold. Ganga apologizes to her. She tells Guddan that she always idolized her, and even then she got crazy to get after Guddan’s happiness.

She thinks she got punished by losing her child. She promises to stay with Guddan and look after her child. She asks Guddan to forgive her. Guddan has no complaints with Ganga. She wants Ganga to be sincere and not cheat them again, since its her last chance. Durga tells Guddan that her decision may cost her a lot. She tells that Ganga must leave.

Guddan tells that its not safe to leave the house, Ganga’s evil may change into good. She has understood Ganga’s pain as a mother. She hopes Ganga doesn’t disappoint her from now. Avinash and Ganga thank Guddan. Dadi and Akshat get glad that Guddan always keeps the family united. Dadi tells that she wants to hear the baby’s laughter soon. Akshat supports Guddan completely since she is gem at heart. Akshat and Guddan rehearse the baby care. They are soon expecting their baby. Guddan wakes up from a nightmare that she has lost her baby.

Akshat tells her that its natural to get nightmares after seeing so much negativity. He promises to always be with her. Guddan is relieved with his promise. Guddan asks him if he doesn’t care for her. He tells that he loves her, he may give his life for her and their child. He cheers her up. They have a moment. He tells that they were away when he got the good news. He couldn’t express his happiness. He thanks her for giving him so much joy. Akshat looks after Guddan as the months pass.

The family gets happy for Guddan’s baby shower. The Bahus perform dance and wish Guddan. Guddan gets labor pain. Akshat gets nervous. Though he tells that he will manage everything, he faints down. Dadi asks them to call for a doctor or take Guddan to the hospital. Durga calls the doctor. She tells them that Guddan can’t be taken to the hospital, the delivery will happen at home. Akshat gets conscious on hearing it and panics even more. Guddan is taken to her room for the delivery. Akshat gets unwell in tension. He asks Guddan to take care of herself and not fall nervous. Guddan asks him not to make her nervous. She tells that she will make him fine once she comes to him after the delivery.

He tells her that he will always look after her. Guddan tells that she feels its a baby girl. He asks her to trouble him by getting her daughter on her side. Everyone gets excited for Guddan’s baby. Akshat tells the family that he is fine. Dadi encourages him. Akshat panicking state makes them laugh. Ganga seeks Dadi’s permission to prepare the aarti plate for Guddan. Doctor comes to them. Akshat asks him about his baby. Doctor tells him that Guddan is fine, but he couldn’t save his daughter. Akshat receives a big shock. The family sinks in sorrow. Doctor tells them that the baby is stillborn. Akshat can’t believe this. He rushes to meet Guddan and his baby.

Reviewed Rating for this particular episode Guddan Shocking news for Akshat 16th July 2020: 3/5
This rating is solely based on the opinion of the writer. You may post your take on the show in the comment section below.