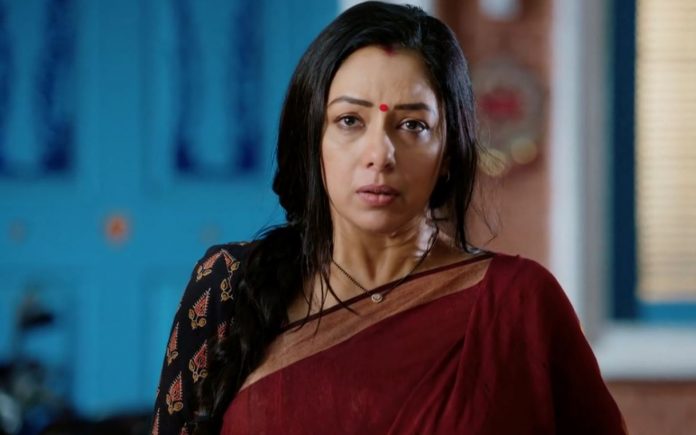 Anupama 5th October 2020 Written Update Unthinkable twist Anupama believes that Vanraj is her strength. She treasures her relation with Vanraj. She feels Vanraj is loyal to her and would always love her. She thinks he gets angry on her, but he loves her a lot. She believes that he can never love anyone. Vanraj breaks her illusion by insulting her again. He asks her about her dare to throw out Kavya, his friend. He feels he always gets insulted because of Anupama.

He admits that Kavya used to respect him and now he has nothing to tell Kavya. He rebukes Anupama for not granting him a moment of peace. He wants Anupama to stop her crying drama. He tells her that he works hard to earn a living for the family, but she doesn’t understand it at all. He feels she is the person who has ruined his life. Bapu ji limits Vanraj’s rage. Vanraj is much upset with her. Bapu ji tells him that the house belongs to Anupama as well.

He doesn’t want Vanraj to fight Anupama in front of everyone. Vanraj makes Kavya hear the argument on the phone call. Kavya is glad to know about Anupama’s insult. Vanraj asks her if she is happy now. Kavya tells him that she is satisfied as of now, but wants to marry him. She wants a name for her relationship. Baa sits silent after making Anupama face Vanraj’s fury. Bapu ji feels bad that his wife always tries to spoil Vanraj and Anupama’s marriage. Baa denies everything. He warns her to mend her ways. He tells her that if Anupama leaves the house, then the house relations will shatter. Baa doesn’t value Anupama.

Meanwhile, Anupama tries to speak to Vanraj. He is pressurized by Kavya. He can’t marry Kavya when Paritosh is getting married to Kinjal. He thinks of the society, who will not spare him for marrying in this age. He wants to handle Kavya. He vents out his frustration on Anupama. He tells her that she doesn’t care for his life. He calls their marriage a big mistake of his life. He tells that she knows nothing than cooking good food. He insults her for still being an illiterate. He tells her that she doesn’t deserve to accompany him anywhere.

He feels hard to talk to her, since she won’t understand him. He tells that he doesn’t want to take her to any party and introduce her as his wife. He blurts out the truth that he doesn’t love her, he isn’t comfortable to have a marital relation with her. He adds that he can’t tolerate her sobbing and sulking face all the time. He throws her out of the room. He hurts Anupama’s heart. Anupama is in much pain because of his bitterness.

She shatters since he never spoke such rude things. She fails to understand his annoyance. She goes out of the house and feels its not her house. She sees Vanraj’s name on the door plate. She thinks of Devika to seek help. She calls Devika, who comes to pick her. Anupama goes with Devika at night. Devika consoles her and asks the matter. Anupama tells Devika about Vanraj’s annoyance due to her illiteracy. She tells her that she has handled the family, children and household, but she failed to handle her marriage. She reveals about Vanraj and her issues.

She feels Vanraj has failed her as a wife. She tells that she has lost after giving her life’s 25 years to Vanraj, who doesn’t think she deserves to be with him. She tells that Vanraj doesn’t think she is suitable for him. She further exclaims that Vanraj doesn’t remember any of her good qualities. He just sees all of her faults. She shares her pain with her best friend. Devika finds her broken. She pacifies Anupama with an assurance of forever support. She doesn’t want Anupama to fall weak.

Anupama tells Devika hat she will go home before the family looks for her. Devika tells that the family needs her for the work, they don’t value her. Anupama insists her to drop her home. Devika hugs her. She drops Anupama, who is thankful to support her. Anupama apologizes for slapping her and insulting her before. Devika forgives her. She tells that she will always be there. Anupama can’t leave her family due to Vanraj’s issues. She enters the house by forgetting the problems. Devika feels sorry for Anupama.

She wants to do her duty towards Anupama. She decides to teach a lesson to Vanraj and bring him to the right path. Devika meets Vanraj and threatens him. She doesn’t want him to mentally torture Anupama. Vanraj is tensed after Devika’s warning. He plays a love drama again and proposes Anupama in front of the entire family. Kavya gets upset to watch this. Vanraj asks Anupama to marry him once again. Anupama is left shocked by his changed behavior. Will he able to convince Anupama? How will he handle the onlooker Kavya? Keep reading.

Reviewed Rating for this particular episode Anupama 5th October 2020 Written Update Unthinkable twist: 5/5
This rating is solely based on the opinion of the writer. You may post your take on the show in the comment section below.