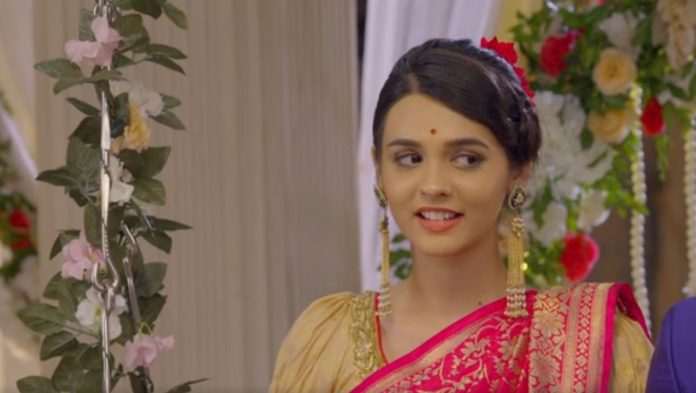 Barrister Babu 6th October 2020 Review update Upcoming twists Bondita faces a big break down when many calamities strike her at once. Bondita’s Mami gets more cruel then before. Not being thankful that Bondita ruined her life and marriage for the sake of Sampoorna, she plans to sell off little innocent Bondita to a brothel owner. She lies to her husband about the brothel owner, who poses as a farmer in front of them. Mami knows well that she is going to get big amount to sell Bondita into the brothel world. She stoops much low and cheats her husband.

She tells Mama that Bondita will be going to do hard work in the fields, she will be safe and earn a living. Mama gets convinced by his clever wife. The brothel owner looks forward to take Bondita along. Other side, Sumati prays for Bondita’s protection. She is ready to take up all the difficulties and disasters on herself. Sumati meets a major disaster when the villagers catch her and burn her alive to punish her for being a widow.

Sumati also bears the punishment since the villagers think Bondita is an abandoned woman now. Sumati fails to protect herself. Bondita senses her mother in trouble. She reaches in time to save Sumati, but their fate isn’t certain. Bondita deals with the villagers’ wrath and also her Mami’s wicked planning.

She believes that Anirudh will come back to take her. She wants her prayers to get answered. She just sees Anirudh as her God, who always protected her from the mad villagers. Bondita doesn’t leave her hope. She takes a bold stand for Sumati and her life. The show has major drama points coming up.

Meanwhile, Saudamini is too happy to get engaged to Anirudh. Trilochan and Anirudh feel helpless, while Binoy doesn’t leave the chance to celebrate in full swing. He arranges a dance program to express his joy. Binoy’s oversmartness costs him a lot. The dancer he calls for entertainment turns out to be Rasila, who ruins the function completely. Saudamini also didn’t imagine that a dancer can get her engagement cancelled. Saudamini wanted to get the ring exchange ceremony done in time. After Rasila’s performance, some men misbehave with her.

Anirudh takes a stand for Rasila, which triggers her anger. She confronts him for not supporting his wife. She reminds him the vows given to Bondita before he makes new vows to Saudamini. Rasila makes him shaken up by her confrontation. Anirudh has no answers to give. She reveals the type of ill treatment tolerated by little Bondita at the village on the name of old customs. Rasila informs him about her short meeting with Bondita, which won her heart.

She is sure that Bondita can never cheat any villager by having a deal with Brijvasi for money. She laughs on Anirudh’s weak trust on his wife. While Binoy tries hard to quieten her, she gets unstoppable. Binoy asks Anirudh to come for the engagement. Anirudh goes lost feeling miserable since he did injustice with Bondita. Rasila further makes him realize his duty before he gets too late and loses Bondita to the rage of the mad villagers. Anirudh gets a new hint of Bondita’s innocence when Sampoorna reveals Bondita’s motive behind meeting Brijvasi.

Anirudh feels proud of Bondita for being so selfless. In an attempt to meet Bondita and save her, he completely forgets Saudamini, who is waiting for him. Anirudh makes an apologize to Saudamini and family. He rushes to meet Bondita, who is in deep trouble at that instance. Mami sells Bondita to the brothel owner by then. What will be Bondita’s fate? Will Anirudh be able to save Bondita in time? Keep reading.

Reviewed Rating for this particular episode Barrister Babu 6th October 2020 Review update Big twists: 5/5
This rating is solely based on the opinion of the writer. You may post your take on the show in the comment section below.