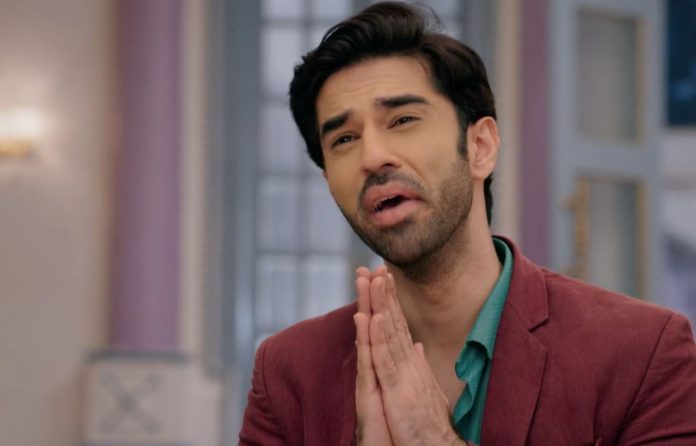 Yeh Rishta Kya Kehlata Hai 5th November 2020 Written Update Aditya returns Krishna gets troubled by the neighbor kids, who remember her as the roadside orphan girl. The boys come to see Kairav. They come across Krishna and try to trouble her. Kairav comes to Krishna’s rescue when the kids make Krishna cry by misbehavior. Krishna gets helpless. She is surprised that her brothers have come to her rescue. She didn’t expect them to come.

It proves that Kairav has really won over his inner bitterness and evil. He has cleared his heart for Krishna. He wipes Krishna’s tears and declares that she is his sister. He accepts her as his elder sister. He answers the boys to defend his sister’s respect. Kairav, Krish and Vansh support Krishna and take a stand for her, even if they have to lose their friends. Krishna gets super joyed to see them supporting her.

The kids have a hug after the apology round. Kairav apologizes to her for insulting her and refusing to accept her in the family. The moment makes Kartik and Naira proud. The couple enjoys their victory. They take the kids happily for Raavan Dahan. Dadi and Manish miss the kids the most. They get surprised when the kids join them for the festive. Kartik and Naira tell the elders how the kids took a stand for Krishna. Naira tells that she is much proud of all the kids, who have finally understood the meaning of family and unity.

Kartik wishes that the family always wins over evil. Naira tells him that they need to control their actions, words and thoughts to have a good harmony in family. She wishes Naksh and Kirti’s divorce doesn’t happen. She tells Kartik that they have to find some way to stop the divorce. Kartik wants to make the Diwali better for Krish. He worries that Krish will suffer the most by his parents’ separation. Kartik and Naira learn that Naksh is proceeding for the custody battle and divorce soon. Kirti isn’t interested in saving her marriage.

She just wants Krish with her. Naksh ends up arguing with her when she fails to understand his emotions. Naksh wants his son with him. They realize that the custody battle will get ugly in the court. Kartik and Naira realize that they have just one day time to stop the divorce. They don’t want Naksh and Kirti to regret all life for their separation. Later, Naira gets to see Manish upset. She tries to know the matter. He is much stressed about Kirti’s divorce. He believed Naksh will keep her happy. She gives him hope that everything will be fine.

He cries for Kirti. Manish seeks her help in stopping the divorce. He tells her that he didn’t expect Naksh to break his relation with Kirti. He wants Naira to take charge and stop the mishap. He asks Naira not to break his hope. Naira ensures that she will stop the divorce. She encourages Manish to try as well. Krish weeps recalling his parents’ separation talks. Krish tells the kids about Aditya, who is responsible for Naksh and Kirti’s divorce. The kids suggest him to talk to Aditya and take his help in stopping the divorce.

Krish believes that Aditya is a good man. The kids make a plan to get the number from Kirti’s phone. Moreover, Naira tries hard to explain Kirti that she should take some time before the divorce proceedings. She asks Kirti to think about Krish’s future. Kirti doesn’t think things can get better between Naksh and her. She decides to not talk about it. Naira hears about Aditya from the kids. The kids lie to her and come up with a drama to get Aditya’s number. They succeed in their plan. Krish calls up Aditya and fixes a meet with him.

Naksh and Kirti still don’t want to resolve their issues. Aditya makes an entry again to meet Krish. Will the kids’ plan work in their favor? How will Aditya take an advantage of his meeting with Krish? Will Aditya lie to Krish that he is Krish’s father? Keep reading.

Reviewed Rating for this particular episode Yeh Rishta Kya Kehlata Hai 5th November 2020 Written Update Aditya returns: 4/5
This rating is solely based on the opinion of the writer. You may post your own take on the show in the comment section below.