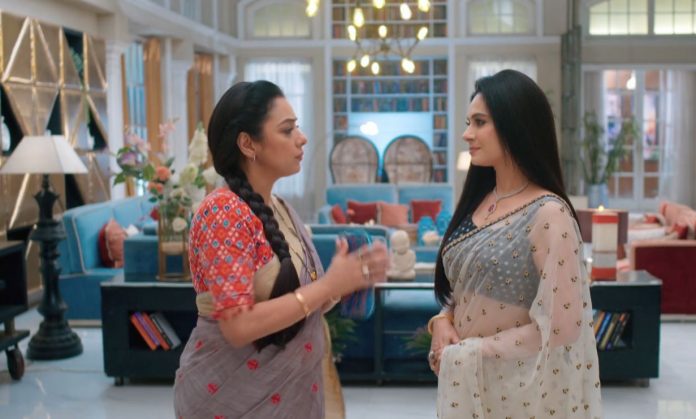 Anupama Rakhi shocking reveal 19th December 2020 Written Update Rakhi receives Anupama and Kinjal well. She tells that she had many dreams for Kinjal’s marriage. She requests that she wants to keep Paritosh and Kinjal’s marriage in a big way. She tells that a traditional marriage is necessary to save the newly weds from the taunts. Anupama tells that Rakhi is right, but she will ask her elders. Rakhi thanks Anupama for agreeing to her idea.

She asks Kinjal to pack her stuff. She hopes Leela would be okay with it. She tells that Leela would not like to see her face. Anupama asks her to meet Leela and apologize. Kinjal tells that she will get her stuff and come. She is very happy to see Rakhi and Anupama together. She clicks a selfie and sends to Paritosh. Paritosh rejoices that Anupama has fixed everything. He shows the picture to the family and dances with joy. Pramod goes to buy the sweets for Kinjal. Anupama thanks Rakhi for accepting the alliance by siding her hatred.

Rakhi makes Anupama fall in her feet. She humiliates Anupama. Anupama is moved by Rakhi’s shocking revelation. Rakhi tells that she was just acting to fool Kinjal. She adds that she will break Paritosh and Kinjal’s marriage. Paritosh tells that parents always forgive children. Samar is glad that Paritosh’s marriage is going smooth now. Vanraj wonders how did Anupama do it. Rakhi explains that she had acted to win Kinjal’s heart. She feels Shah family has trapped Kinjal. She wants to bring Kinjal back to her house, when Kinjal hates Paritosh and entire family.

She challenges that she will win Rakhi’s heart. Rakhi doesn’t think Anupama’s dream will complete. Anupama promises to keep Kinjal happy. She wants Rakhi to leave her anger. Rakhi tells that she will not let Paritosh and Kinjal’s relation flourish. Anupama isn’t tired of connecting the relationship. Kinjal is so happy that Anupama suggested her to meet Rakhi. She tells that Rakhi loves her a lot and wants to keep a grand marriage. She asks Anupama not to take tension for the expenses. She tells that parents’ happiness matters to her.

Anupama doesn’t want her to worry for expenses. Rakhi finds Anupama the best. Anupama is stressed. Kinjal returns home and meets the family. Samar and Pakhi tease Kinjal and Paritosh for the big transformation after the marriage. Kinjal tells that Anupama has convinced Rakhi well. Leela suspects that Rakhi is convinced. Kinjal feels lucky to get a Saas like Anupama. Vanraj suspects that Anupama is hiding something. He confronts Anupama to know if Rakhi hasn’t forgiven Kinjal and is just faking it. He tells Anupama that he can see the problem on her face.

He asks her what did Rakhi tell her. Anupama tells him that Rakhi has threatened her being concerned for Kinjal. He tells that Rakhi can’t live without insulting them. She mentions that they will control their own actions and change Rakhi’s mind with time. She wants him to now spoil things with her anger. He tells Anupama that her overconfidence will trouble the family. She adds that she can lose, but will not accept defeat, she will keep trying until she wins. He asks her about the remarriage decision.

Anupama tells that she has asked Rakhi to meet the family. He doesn’t want her to arrange the marriage in some temple. He wants Anupama to seek her help once again. Vanraj tells Leela that he will spend for the marriage. He doesn’t want Rakhi to succeed in her evil motives. Anupama gets Samar on her side. Samar realizes that she is troubled within. He asks her if Rakhi had upset her. She asks him not to tell anyone about it. She tells that Rakhi isn’t happen, she wants to separate Paritosh and Kinjal.

Samar is in for a shock. Anupama tells that Kinjal shouldn’t get away from her mother. She wants Kinjal to be always connected with her Maayka. She wants to handle the situation her way. Anupama reapplies for the job. Vanraj also faces a financial letdown when his job gets threatened. Anupama bags the new job and takes a step towards handling big responsibilities.

Reviewed Rating for this particular episode Anupama Rakhi shocking reveal 19th December 2020 Written Update: 5/5 This rating is solely based on the opinion of the writer. You may post your own take on the show in the comment section below.