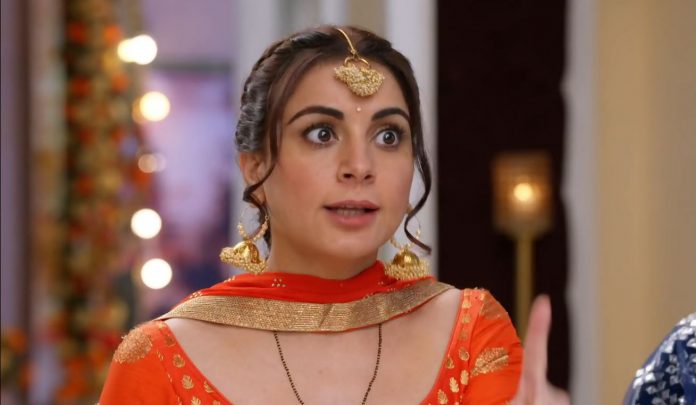 Kundali Bhagya 11th January 2021 Written Update Daring Preeta Karan’s flirty side surprises Preeta. She is very happy that her marriage is getting normal. She likes the happiness around. Kritika gets much happy when she receives much love from Akshay’s mother. Preeta doesn’t want to spoil their happiness. Sherlyn stops Mahira from making any mistake. Kareena takes care of the guests. She is pleased to see the way Preeta is doing her responsibility. Sherlyn apologizes to Mahira. She tells that she is sorry to misbehave with Ramona. She offers help to Mahira.

Mahira wants her help in spoiling Preeta’s image in front of the Luthra family. Sherlyn tells Mahira that they will not miss out the chance when they find a good one. She tells that they will target Preeta by using Akshay. Mahira is relieved that Ramona is around. Sanjana and Ramona prepare to support their daughters in the plan. Karan makes sure that the Jaago ritual is just exactly the way it happens in villages.

Rakhi enjoys the Jaago night experience by the special troupe called by Karan. The house gets celebrations and enjoy. Karan and Preeta’s performance adds sparkles in the celebrations. While Rakhi is happy to see them, Mahira gets jealous. Mahira can’t tolerate the sight of their smiling faces. Preeta wants to know the person calling Akshay. She sees Ruchika’s name flashing on the screen. Shrishti calls Preeta to a corridor for a meeting. Preeta reaches her. She tells Shrishti about Ruchika.

She wants to find about the girl, if she is Akshay’s girlfriend. Preeta tells Shrishti that she has taken the responsibility of Kritika’s marriage, she can’t help Shrishti much by disappearing from the functions. Shrishti tells that Akshay would be confident that he has won and enjoy the function without being alert, which will help them. She makes a plan to steal Akshay’s phone to check the messages and gallery. Preeta doesn’t want Shrishti to get caught. She hopes that Shrishti doesn’t fail.

Shrishti happens to see Akshay and greets him. Akshay doesn’t know that Ruchika has also arrived. Shrishti tries to get Akshay’s phone. He tells that he doesn’t want to have any drinks. He wants to enjoy the functions. He spots Ruchika. He panics and leaves the phone in a hurry. He goes after Ruchika. Shrishti gets his phone with ease. Preeta follows Akshay to know about his meeting with Ruchika. Ruchika doesn’t want him to marry Kritika. He tells her that he has to marry Kritika for their sake. Preeta finds him hugging Ruchika.

Her suspicion gets true. His truth gets known to her. She thinks if she should tell the truth to Kritika. Rakhi gets emotional to perform Chudiya rasam for Kritika. She cries that Mahesh is unconscious, but still he can hear them, he can feel their emotions and will be glad.

Rakhi and Karan are positive that Mahesh will recover soon. This news gives shock to Sherlyn. Rakhi tells that Mahesh will be out of coma very soon. Sherlyn rushes to Mahira. Karan attends Rishabh’s call. Preeta takes Kritika along. She confronts Akshay about Ruchika. Akshay surprising accepts that he was with someone. This shocks Karan and Kritika. What story will Akshay cook up? Do you love the all new daring Preeta? Comment below and keep reading.

Reviewed Rating for this particular episode Kundali Bhagya 11th January 2021 Written Update Daring Preeta:3/5 This rating is solely based on the opinion of the writer. You may post your own take on the show in the comment section below.