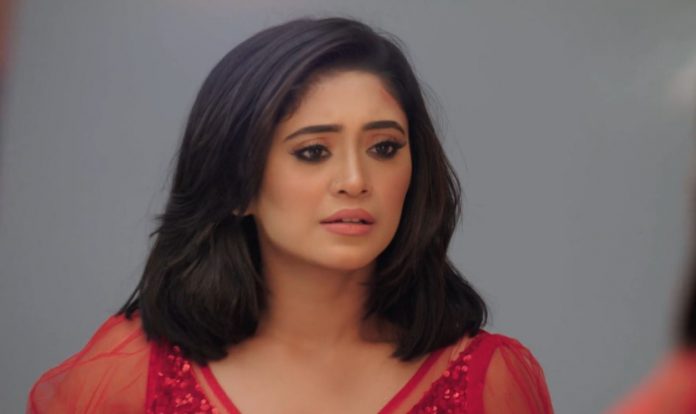 YRKKH Upcoming Naira shows up Huge Secret for Goenkas Kartik doesn’t want to talk about Sirat when its a special day for Naira. He tells Dadi that its Naira and his wedding anniversary, he just wants Naira’s memories and remembrance, he doesn’t want to talk anything about Sirat who is no way connected to Naira. Dadi tells him that she knows the fact that everything takes place for a reason, nothing is unplanned by the fate.

She wants to meet Sirat and know about her life. She tells that there is some secret unknown to them. Kartik doesn’t think so. He tells that its mere coincidence, Sirat can never be their Naira, they have seen Naira dead and also did her final rites. Dadi doesn’t believe that Naira is dead, after knowing about Sirat. She feels there is something to explore, something to realize and accept. Kartik doesn’t listen to her.

He doesn’t want Dadi to have the same illusion like Kairav and him. He tells her that they shouldn’t think about Sirat much. Dadi asks him why did his senses get tricked on seeing Sirat when she isn’t Naira. He gets speechless with Dadi’s question. On the other hand, Sirat pins on her anger by the pressure of her bad childhood. She throws out all the anger on her opponent. She plays the match to vent out her frustration over her miserable life.

Sirat wins the match by knocking down the opponent before time. She gets awarded and also sees a journey beginning. She wants to go ahead in the boxing career. Rohan is very happy for her. He tells her that she has used her anger in the right way by directing it for her goals. He congratulates Sirat and asks for a treat for her victory. Rohan plans to cheer her up. They land up at the same restaurant. Rohan asks the manager to make some arrangements to surprise Sirat on her birthday. The manager gets mistaken that she is Kartik’s wife Naira.

Rohan and Sirat get puzzled to see a lots of decor and flowers. They didn’t see such a sight before in their lives. Rohan thinks the manager has overdone it and would pass a heavy bill to him. He gets worried for the bill, while Sirat likes everything in the party. She stands before Naira’s picture. She wonders how did her picture reach the manager. Rohan tells her that he had passed her picture, but this one is different.

He doesn’t guess that its Naira’s picture. On the other hand, Sheela forgets about Sirat’s birthday. She meets Maudi to reveal that she had fixed Sirat’s alliance with the same guy who refused them before. Maudi gets raged on Sheela’s shameless behavior. She feels Sheela is a stain on motherhood, she is very selfish and never thought good for Sirat. She reprimands Sheela for fixing the alliance against Sirat’s wish. Sheela leaves Sirat on her own fate.

Maudi prays that Sirat’s fate is blessed, she gets happiness in her life as soon as possible. She makes a wish that someone special enters Sirat’s life and changes it for the good. Maudi’s prayers get fulfilled when Sirat gets Kartik in her life. Kartik and Goenkas reach the venue only to see the grand arrangements made by Rhea. Rhea impresses Kartik by putting up Naira’s numerous pictures from the best memories. Rhea gets praised by one and all for her efforts.

Gayu rebukes Rhea by sensing that Rhea wants to take Naira’s place in Kartik’s life. Surekha asks Rhea to ignore Gayu, who doesn’t mean anything to them. Surekha also wants Rhea to marry Kartik. Rhea’s surprise makes everyone miss Naira. The family emotionally remembers Naira. They feel that Naira is with them every moment. Sirat gets a surprise when the staff hands over a beautiful red gown to her, which Kartik had chosen for Naira. Sirat gets dressed in the red gown. Kartik tells the family that he has a big surprise for them. He doesn’t want Kairav to weave false hopes. He wants to show Kairav that Naira left them forever.

He doesn’t know that Sirat is going to come in front of them wearing the gown. It so happens that Sirat appears in front of the Goenkas when Kartik announces the surprise. Kairav is all just happy that his belief didn’t shatter, his mum has really come as he wanted. Kartik is shell shocked to see Sirat looking more like Naira this time. Even his family is super duper shocked on seeing Sirat for the first time. Everyone gets to believe that she is Naira. What’s the truth behind Sirat and Naira’s connection? Can you guess the possibility? Comment below and keep reading.

Reviewed Rating for YRKKH Upcoming Naira shows up Huge Secret for Goenkas: 5/5 This rating is solely based on the opinion of the writer. You may post your own take on the show in the comment section below.