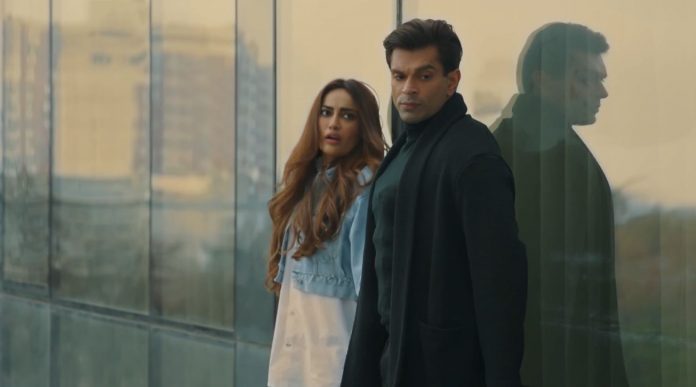 Qubool Hai 2.0 Episode 2 Two hearts in a hotel Written Update Zoya asks Asad where did he get her. She wants to get a cab and leave on her own. She finds Asad humorous. He tells that he will walk up to his hotel. Zoya has no place to go. She decides to go along. He tells that the hotel staff can arrange a cab for her. The goons are actually Salman’s friends, who tried to get Zoya back to the wedding. They tell Salman about Zoya’s boyfriend. Salman wants to find Zoya at any cost and marry her. Zoya assumes that Asad wanted to go for hunting and used the weapon for their safety.

She tells him about Salman, who also likes hunting animals. He has no interest in anyone’s life. Zoya tells that they can have a glance at the souvenirs. Asad is already famous in Serbia. Zoya catches him smiling. She tells that he is smiling on getting some good attention. She lectures him about his mannerisms which has to be perfect. Salman doesn’t stop searching for her. Zoya tells her plans to leave Serbia.

She wants help from Asad to book her tickets. He asks her to call her friend to the hotel and seek help. Zoya further irritates him by her unwanted poetry. Salman tells Zoya’s mother that Zoya eloped with her lover. Sana tells them that Zoya has no boyfriend. Salman tells his parents that Zoya can’t refuse to marry him. Asad doesn’t want anyone to click his pictures with Zoya. He pulls her into the lift to avoid the unnecessary attention. She doesn’t want the people to assume that she has eloped with him.

Asad tells that people won’t assume them to be a couple, since they aren’t a match. The people really assume to be a couple and wish them all the best for the marriage. Asad doesn’t board the flight. He is still with Zoya at the hotel. Asad finds Zoya very comfortable with him. She asks him not to give any disgusting look. They felt that their meet will be the final one. But destiny had other plans for them. He didn’t know his day is going to end so badly. She tells that she didn’t mean to meet him either.

She didn’t know that Salman will send the goons to chase her. He tells her that she has no idea who he is. She tells that he will also be equally shocked when he knows her truth. Salman is still nagging on being cheated by Zoya. He asks his friends to track her. He learns that Zoya is at some hotel with her lover. Asad informs his coach about the delay to reach the airport. He gets busy with Zoya. Coach asks him about his ex, who was present at the arena. Asad doesn’t reveal much. Zoya borrows Asad’s shirt.

She tells him that she didn’t borrow his kidney. She wants to return it back to him by courier. She asks for his address. He asks her not to show interest in him. She asks him to just believe her, its just her manners. She speaks to her mother and apologizes for breaking faith. She wants to meet her father, who may be regretting his deeds. Asad tells Zoya that he has to leave.

Zoya stumbles and gets his help once again. Salman’s friends, the so-called goons reach the same hotel to find Zoya. Asad informs his mother that he is leaving for the airport. His father Rashid returns in their lives. Sana informs Zoya that Salman would have sent his goons to get her. Zoya gets scared when the goons try to get inside the hotel room and kidnap her. Asad reaches back to Zoya to help her out. Indian Intelligence keeps a watch at their every move.

Reviewed Rating for Qubool Hai 2.0 Episode 2 Two hearts in a hotel Written Update: 5/5 This rating is solely based on the opinion of the writer. You may post your own take on the show in the comment section below.