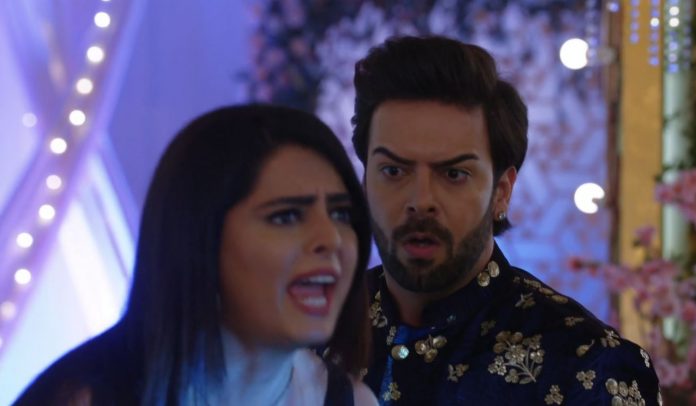 Kundali Bhagya 17th March 2021 Written Update Sherlyn shocker Shrishti tells Sarla and Janki that they are exposing Prithvi’s truth. Preeta tells the family that she has a proof against Prithvi. Sameer plays the picture on the projector screen. The family is shocked to see Prithvi’s wedding picture. They fail to see Sherlyn’s face. Kareena tells them that Prithvi is already a groom in the picture, he is married. Preeta asks Prithvi to admit the truth.

She wants him to tell them about the girl he married. She asks Prithvi to answer them. Rakhi and Bani also question Prithvi about the girl. Rishabh asks Prithvi not to upset Kritika by his silence and just answer them. Kareena tells them that Prithvi has cheated all of them, he is already married and had hidden the truth from them. She rebukes him. Prithvi asks Kritika if she also wants to find out about his marriage.

He wants to see if she trusts him, if she thinks the same about him. Rakhi tells that Prithvi’s real face has come out, he can’t be trusted now. Rishabh tells Prithvi that they can never tolerate anything against Kritika, they can’t see her tears. He asks Sameer to call the police. Shrishti tells Prithvi that he will be going to jail for cheating Kritika. Prithvi tells them that he didn’t do any sin, he isn’t married to anyone. He denies the blames. He asks Kritika to trust him. He reminds Kritika that the picture is fake.

He wants a chance to prove he is innocent. He tells that they are defaming him. Preeta asks him to answer whom did he marry. Prithvi asks Kritika to tell him if she also wants his answer. He tries to manipulate her. Kritika refuses. Prithvi tells them that he will not answer them anything, since Kritika doesn’t want him to answer. Preeta reprimands him. Prithvi tells Preeta that he is really married. Karan slaps him in rage. Sherlyn madly reacts. She stops them from beating up Prithvi. Prithvi gets worried when Sherlyn shouts on Karan for Prithvi’s sake.

She changes her side suddenly and shocks Prithvi. She tells Rishabh that she was also against Prithvi’s marriage. She asks Rishabh not to kill Prithvi and go to jail, else their baby will lose his dad. She lies to them. She clears her name from Prithvi’s mess. She asks Prithvi to make an excuse soon. Prithvi doesn’t know what will he do. He seeks his mom’s help. He tells that he will prove his innocence. His mom knows that Sherlyn has withdrawn the support. She wishes that Sherlyn’s truth got exposed, rather than Prithvi’s.

Prithvi starts fooling Kritika. He tells them that he is just married to Kritika. Sarla asks Prithvi to tell them about the girl in the picture. Prithvi smartly comes up with a story. Suresh tells that they aren’t fools, they want a straight explanation. Prithvi tells Kritika that he knows she respects him, she loves him, he had promised her before itself that he will respect her decision. He tells that he had accepted their marriage because he also respects her and loves her. He adds that everyone hates him in her family.

He wants them to know his feelings, how he would react when Kritika’s brothers didn’t accept him heartily. He feels humiliated. He mentions that only Kritika is important for him. He likes Kritika who is so understanding. Kareena tells him that they are Kritika’s family, they want to know the truth. Preeta wants Kritika to ask Prithvi about his past. Prithvi tells them that Kritika trusts him, she will not insult him. He further tells that he will not answer them when they don’t matter to him. Kritika shockingly questions him about the picture. She tells him that she trusts him, she respects him and she will support him as well.

Prithvi tries hard to cheat the Luthra family, but Karan and Preeta are aware of his truth. Karan and Preeta meet Prithvi’s college friend Shubham who knows about Prithvi and Sherlyn’s marriage. They want Shubham to help them expose Prithvi’s truth. Will they succeed this time? Comment your view and keep reading.

Reviewed Rating for Kundali Bhagya 17th March 2021 Written Update Sherlyn shocker: 5/5 This rating is solely based on the opinion of the writer. You may post your own take on the show in the comment section below.