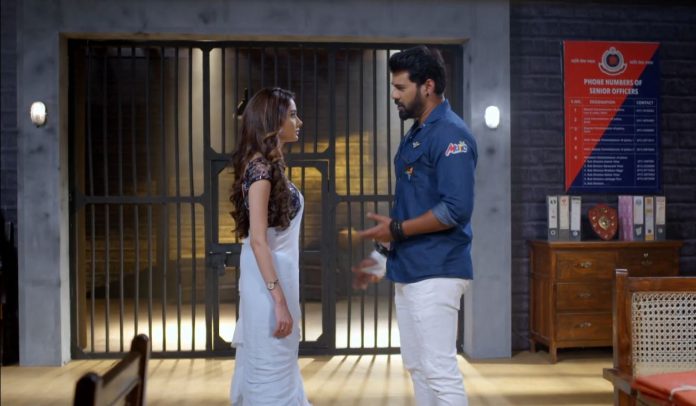 Kumkum Bhagya Abhi big reveal Upcoming 19th April 2021 Aaliya reprimands Tanu for accusing Abhi. She tells that Tanu is targeting Abhi for his money. She gets violent and throws out Tanu. Inspector asks Aaliya not to hurt the victim, else he will arrest her. Abhi and Pragya defend Abhi, who is reacting on Tanu’s provocation. Pragya asks Tanu not to ruin Abhi’s life, he has a family, he just recovered and has a right to stay in peace. Tanu threatens to get her arrested as well. Pragya tells that Abhi is innocent.

Tanu lies that Pragya was trying to bribe her to shut the case. Inspector rebukes Pragya for lying to the police. Tanu accuses Abhi, Pragya and Aaliya for ruining her life. Inspector arrests Abhi. He threatens to arrest Aaliya if she hinders their work. Abhi asks the evidence against him. Inspector tells them that they have valid evidence against Abhi, which they shall be presenting in the court at the time of the case hearing. Abhi gets arrested.

The family is in shock. Pragya tells Inspector that Tanu is lying. Abhi fails to prove his innocence. Ranbir drops Prachi home. He returns the phone. He tells Sarita that he was worried seeing the riots, but everything is in control now. Sarita thanks him. She wants to talk to him regarding Prachi. Ranbir tells that he wants to return home, his family would be worried. Sarita senses the tensions between Prachi and Ranbir.

Tanu feels Abhi deserves this humiliation. She invites the media as well. Pragya gets hurt while defending Abhi. The media enters the house to report the news of Abhi’s crime. Inspector asks the media not to bring the news out. Reporter asks the Inspector not to hide the truth. Tanu plays the victim card. Reporter questions Abhi about his crime conspiracy. Pragya tells them that Abhi is innocent, she knows about his limits.

Abhi asks the reporter not to trouble them with the questions. Tanu tells the media that Abhi had raped her. Aaliya asks Tanu why is she doing this. Tanu tells that Aaliya didn’t help her when Abhi ousted her, she will not spare Abhi. Inspector stops Abhi from raising a hand on the reporter. Pragya asks Inspector to stop the media. He asks Mehras to hire a lawyer to save Abhi. Tanu advises Pragya to never hurt her heart. She tells that she has the evidence, she will get rid of her prolonged pain of humiliation by using that evidence.

She wants revenge on Pragya. She tells Pragya that she will ruin all the relations in the house. Pragya runs after Abhi. Baljeet feels sorry for Abhi. Abhi gets questioned by the media. Pragya tells them that she will support the truth, her husband is innocent. She asks Inspector not to believe the fake report. She doesn’t get any help. Pragya feels the pain of separation with Abhi. Abhi cries seeing Pragya’s tears. He feels shattered within. Pragya runs to cover the distance. Pragya begs Tanu to let them stay happy.

Tanu doesn’t listen to her. Aaliya contacts her lawyer. Mitali asks Aaliya how can’t Tanu do this, when she claimed to love Abhi. She asks Aaliya to control Tanu. Aaliya recalls the injustice done by Abhi. She remembers that she had refused to Tanu’s evil conspiracy against Abhi. She had joined hands with Tanu to fight Pragya, but didn’t agree to take revenge on Abhi. Tanu wanted her rights on Abhi. She wanted to stay with Abhi by making an apology. Aaliya wanted to end her terms with Tanu, by supporting her family and Abhi.

Tanu had threatened her already that she will ruin Abhi, Aaliya and entire family. Aaliya didn’t know that Tanu will plot such a cunning thing. She tells Mitali that she wanted to do something good, but things went wrong. She blasts her anger on Pragya. She feels Pragya doesn’t deserve the respect. She accuses Pragya for bringing bad luck for Abhi. She tells Baljeet that Pragya is never auspicious for them. Baljeet tells that its Tanu’s mistake, Tanu is lying. Aaliya tells that Tanu created the drama, just because of Pragya.

She regrets that Abhi got arrested. She asks Pragya to leave the house, since Abhi isn’t with them now. She rebukes Pragya for always bringing problems for Abhi. Pragya knows that Tanu has falsely accused Abhi. Aaliya begs her to just go away from their lives. Pragya sadly leaves the house. She returns to Sarita and Prachi with the bad news. Tanu takes her revenge on Abhi and Pragya. She doesn’t want to spare him at any cost.

Abhi tells her that Pragya’s love will protect him once again. He insults Tanu’s selfish love. He reveals the strength of his love and his faith on his wife Pragya, who will bring him out of this mess easily. Tanu tells that he has hurt her for the sake of Pragya’s love, she will not leave Pragya.

Pragya tells Sarita that Aaliya had once again ousted her from Abhi’s house, but nobody can make her out of his life. She wants to fight against Aaliya and Tanu. She tells that she never let Aaliya and Tanu win and come between Abhi and her, they can’t do anything to separate true lovers. She keeps up her strength. She doesn’t want anyone to hurt Abhi. Both Abhi and Pragya boast of their true love and its strength. Will they succeed in fighting Tanu’s allegations? Comment your take and keep reading.

Reviewed Rating for Kumkum Bhagya Abhi big reveal Upcoming 19th April 2021: 2/5 This rating is solely based on the opinion of the writer. You may post your own take on the show in the comment section below.