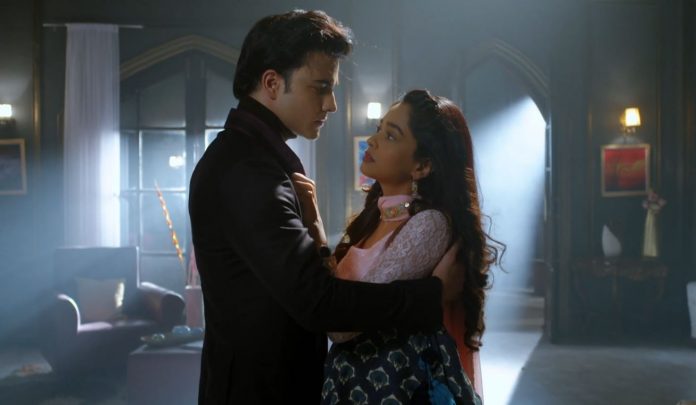 Kumkum Bhagya 27th April 2021 Full Update Ranbir arrested Prachi and Ranbir sneak into Tanu’s house to collect evidence against her. Shahana calls up Prachi to know her whereabouts. Prachi tells that she is at Tanu’s house, she wants to find the truth. She wants to request Tanu once again. Shahana tells that Tanu may not listen to her. Prachi asks Shahana to not waste her time and phone battery by talking long. She plans to record Tanu’s confession.

She tells that she doesn’t want Tanu’s guards to get alert. Shahana wishes her all the best. Tanu asks her aide what will he have in drinks. Ranbir spies on her. She tells that she is getting more stressed with each passing day. Ranbir finds her celebrating, as if nothing happened. She gets a call from the inspector. She goes to meet the inspector. Ranbir wants to find out if Tanu has some flaw, so that he may use it against her.

He breaks inside her house to gain as much information as he can. Ranbir wants to help Abhi. Prachi finds Tanu leaving. She thinks its a chance to find out evidence against Tanu. She also plans to break into the house. Ranbir calls up Aryan to take his help. Aryan asks him what is he up to. Ranbir takes his tips to find out the important things hidden by Tanu. Prachi sees the cctv camera outside the house. She tells Shahana that she wanted to meet Tanu.

Shahana asks her to find any window to get inside. Prachi finds a window open, left by Ranvir. She also sneaks in. Aryan gets connected to Ranbir on call. Ranbir senses that someone has come in from the window. He wonders who is that. Prachi senses that someone is in the bedroom. Ranbir tells Aryan that he is searching Tanu’s bedroom to find evidence against her. He hides to know who is coming. Prachi goes to check who is hiding behind the curtain. Ranbir and Prachi come closer in a moment. They get their feelings of love.

Aryan asks Ranbir is he lying to meet Prachi. Ranbir asks Prachi why did she come. She tells that she had come to record Tanu’s confession. She plans to anger Tanu to make her admit the truth. He tells that he had come following Tanu, he wants to find an evidence to help Abhi. He tells that they can prove Abhi innocent. He tells her that Tanu was meeting someone. She asks if it was a police officer. He laughs on her innocence. Tanu tells the inspector that she can’t come often for the formalities, its not easy for a victim to roam around freely. She has her aide along with her.

Meanwhile, Pragya meets a lawyer Raghubeer Mishra, and gives reference of Sarita. He tells her that Sarita had called him and told everything on call. He tells that he fights the case for truth, he can take her case, but he can’t guarantee that he will win. He mentions that he had never fought a big case, Abhi is famous and the case is really crucial, Abhi can land in jail if they make a mistake in the court. He knows that he will get enough money from the case, but he doesn’t want to take risk. He apologizes to her that he can’t fight the case.

Furthermore, Tanu catches Ranbir and Prachi red-handed. She reprimands them for checking her house in her absence. She shouts on them at the police station. Ranbir saves Prachi. He gets behind bars. He tells Pragya that he knows that Tanu has a video which will prove Abhi innocent. He adds that he had gone there just for Abhi’s sake, he wanted to gather the proof before the court hearing. He tells that he wants Abhi saved from the bad allegations. Do you think the show is going looped and should come to an end with proper ending? Comment your views. Keep reading.

Reviewed Rating for Kumkum Bhagya 27th April 2021 Full Update Ranbir arrested3/5 This rating is solely based on the opinion of the writer. You may post your own take on the show in the comment section below.