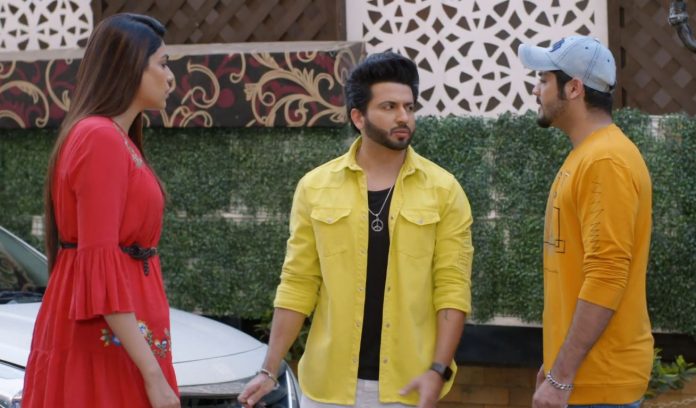 Kundali Bhagya Karan best move Full Update 28th April 2021 Karan is glad that Kareena has finally accepted Preeta. He finds a boon in disguise of a sorrowful time. He asks Preeta to take care of herself until he meets her again. Preeta is thankful to him. He tells her that she can occupy the bed once she comes home, he will share his bed with her. They get emotional. Karan makes a leave. Preeta cries after he leaves. Shrishti requests Ruchika to tell the truth to her. Sameer tells that Preeta is arrested for Akshay’s murder.

Ruchika refuses to help. Shrishti argues with her. She warns Ruchika. Ruchika tells that she read about Akshay’s murder in the newspaper. Shrishti reads the tension on her face. She asks Ruchika not to lie. Ruchika tells that police would come and oust them. She threatens to defame Karan. Karan comes to Arora house to meet Sarla and Janki. Sarla tells him that she will not slap him, she knows that he loves Preeta and wants to help her out. She adds that Preeta knows his love, she loves him too. Karan agrees with her.

He tells that he didn’t tell Preeta that he had sent a pillow for her, but she knew it right. Sarla is glad to see his concern for Preeta. Janki blesses Karan for secretly helping Preeta. Sarla knows that Karan doesn’t know to express his emotions. He admits that he is bad in emoting his feelings. He asks her not to worry for Preeta, he is there for her. Sarla hugs him happily. He makes a promise that Preeta will be out of the jail soon.

Ruchika tells Shrishti that it will be good for everyone if they leave from her house. Karan has promised Sarla, but wants to ensure that he keeps his commitment. He struggles to find evidence in her favor. Police arrives at Ruchika’s house. Ruchika complains about Sameer and Shrishti. She tells the cops that they were threatening her. Shrishti knows that Megha was threatening her. Ruchika asks the cops to throw them out. She lies that they had beaten her up. She provokes Shrishti. Sameer stops Shrishti from falling in Ruchika’s trap.

Shrishti gets arrested, but Karan comes to her rescue. He stops the arrest in time, relieving Sameer and Shrishti. Karan puts Ruchika in trouble. He tells Ruchika that he can expose her truth on the social media, she will get defamed and lose her job as well. He asks Ruchika to think of her benefit. Ruchika apologizes to Karan. Inspector warns Ruchika against defaming and accusing innocent people. On the other hand, Prithvi fixes the car tyre to help Mahira. She wants him to just rush. He tells her that he is helping her to return her favor. She asks for his car. He tells that he needs to go somewhere as well. They get into an argument.

He asks her where is she going in a hurry. Shrishti tells Sameer that she had messaged Karan and called him at Ruchika’s place to take his help. Sameer and Shrishti tell Karan about Ruchika and Megha’s fight. They meet Mahesh, who tells them about the discussion with the lawyer. Shrishti tells that if she told Karan about Ruchika and Akshay’s affair, then Karan would have not gone for meeting the lawyer. She wants to find the truth and help the law. She tells Sameer that they have to find the truth and prove Preeta innocent. Mahira and Prithvi have to meet the blackmailer. Prithvi’s car breaks down. He gets frustrated.

Reviewed Rating for Kundali Bhagya Karan best move Update 28th April 20213/5 This rating is solely based on the opinion of the writer. You may post your own take on the show in the comment section below.