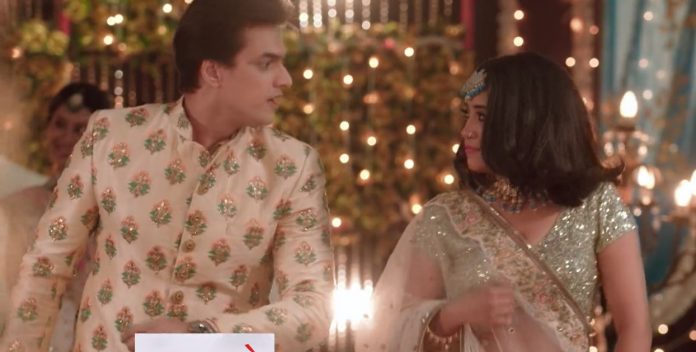 Yeh Rishta Kartik engagement twist Upcoming 28th April Kartik and Sirat’s engagement gets close. The family is very happy and bless Kartik and Sirat for the new beginning. Suwarna asks Sirat to choose a ring. She realizes that Sirat is a gem herself, who doesn’t have any greed for money and jewellery. Sirat lets Kairav choose her ring, which gives much happiness to the elders. They so wish that Kairav always stays happy with Sirat.

Kairav tells Sirat that they would meet Kartik and show him the chosen ring. He insists and takes Sirat along. Sirat accompanies Kairav to meet Kartik. Kartik happens to bump into Ranvir and finds him injured. He offers help to Ranvir as a true kind person he is. Ranvir and Kartik reconnect again, and this time Sirat also comes into picture. Ranvir is glad to know that Kartik is the same person who wanted the boxing gear for his fiancee. Kartik insists Ranvir to come with him to his hotel and get the first aid done. He makes a relation of friendship with Ranvir.

Ranvir gets impressed with Kartik seeing his humble behavior. Kartik tries asking about Ranvir’s ex, but he fails to ask further. Ranvir too misses to hear Kartik talking about Sirat. Kartik asks Ranvir to meet Sirat, but the latter get into a hit and miss. Sirat comes after Ranvir makes a leave. She learns about Kartik’s injured friend. Kartik praises Ranvir, who is also a true believer in lover. He so wishes tat Ranvir gets his love.

Ranvir too gives his good wishes to Kartik. The family brings Kartik and Sirat together to make them spend time. They also suggest Sirat to meet Naksh. Kartik is sure that once Sirat meets Naksh and spends time with him, she could convince him that she isn’t bad-hearted. Kartik wants Naksh to believe his decision. Kartik is pretty sure that Naksh would forgive him and accept Sirat. Kartik wants to get married with the happiness and consent of everyone. Naksh finally gives his consent for Kartik’s relationship with Sirat. He accepts Kartik’s decision of marriage. Sirat gets glad that she could win Naksh’s trust. On the contrary, Rhea gets jealous seeing the moment between Kartik and Sirat.

Sirat makes her even more jealous. Later, Rhea tries to find a way to stop Kartik and Sirat’s engagement. She comes across Ranvir. She tries to find out if Ranvir is Sirat’s ex-lover. Ranvir is taken aback when Rhea puts forth a big question for him, if he still loves Sirat and would like to return in her life. What will be Ranvir’s decision? Rhea tries to bring Ranvir in the big picture to ruin down Sirat’s happiness. Will Rhea succeed in separating Kartik and Sirat? Keep reading. Comment your views below.

Full Update: Naksh vents out anger, when he fails to see someone else in Naira’s place. He can’t see Kartik and children singing someone’s praise. Kirti explains him that he shouldn’t have any problem with Kartik’s remarriage. Naksh tells that Sirat resembles Naira’s face, she can never be like Naira. Kairav and Vansh play cricket. Kairav falls into danger. Sirat comes to his rescue, while Naksh runs for the purpose. Sirat asks the kids to be careful. She worries for Kairav as a mother.

Naksh witnesses Sirat’s concern for Kairav. Kirti is pretty sure that Naksh finds Sirat’s positive side and accepts her. Ranvir isn’t sure if he has really seen Sirat. He comes face to face with Sirat’s Nani, who curses him for his misdeed. He apologizes to her. He asks her about Sirat, if she has moved on in life and living happily, if she got married to someone. Kartik and Sirat secure Kairav. Kairav tells her about Kartik’s new friend. Sirat misses Ranvir. She wishes to meet Kartik’s friend.

Ranvir tells Nani that he wants to meet Sirat. He requests her. Nani doesn’t melt her heart for him. She asks him to never meet Sirat. He promises that he will not bother her. She asks him to go away, as he left Sirat in the mandap. She reprimands him for breaking Sirat’s heart. She tells him that he is dead for Sirat. He asks Nani to tell him about Sirat. Nani doesn’t listen to him. Ranvir cries that he can’t control his heart. He follows Nani to know about Sirat. Nani blesses Sirat to be happy with Kartik.

She wants to keep the engagement on the decided date. She doesn’t tell Sirat the reason for the rush. Sirat doesn’t know what’s happening. Ranvir loves Sirat a lot. He expresses his bitter feelings for his dad, who ruined his life, who got him attacked to stop his marriage with Sirat. Nani speaks to Goenkas to keep the engagement soon. Manish suspects her intentions. Kartik keeps Nani’s wish. He tells them that they will keep the engagement whenever she wants.

Suwarna relieves their tension. She tells that Suhasini has agreed for the early mahurat. Kartik informs Dadi that he is doing everything as she instructed. Manish speaks to Kartik about the cracked relations. He asks Kartik if Sirat had told him about her past. Kartik tells him that Sirat was getting married to someone, but it couldn’t happen due to some reason.

Manish tells that two broken hearts can’t form anything. He asks Kartik not to marry Sirat. Kartik tells him that he isn’t marrying Sirat for love. He just loves Naira. He adds that Sirat understands his love for Naira, Rhea can never understand him like Sirat does.

He asks him not to compliment Rhea’s life. He adds that Kairav likes Sirat, not Rhea. Manish asks him to be wise in deciding things. Kartik adds that he is finding a mother for his children, not any wife in Sirat. He discusses Sirat’s disturbing past. He is confident that Sirat and his marriage will work, if the elders bless him. He seeks Manish’s blessings in an emotional way. Manish is left with no option than to support him. Naksh too accepts Kartik’s decision. Ranvir reaches Sirat in an unexpected manner. Rhea plans to manipulate Ranvir and takes him to Sirat. Should Sirat get back to Ranvir? Comment below.

Reviewed Rating for Yeh Rishta Kartik engagement twist Upcoming 28th April4/5 This rating is solely based on the opinion of the writer. You may post your own take on the show in the comment section below.