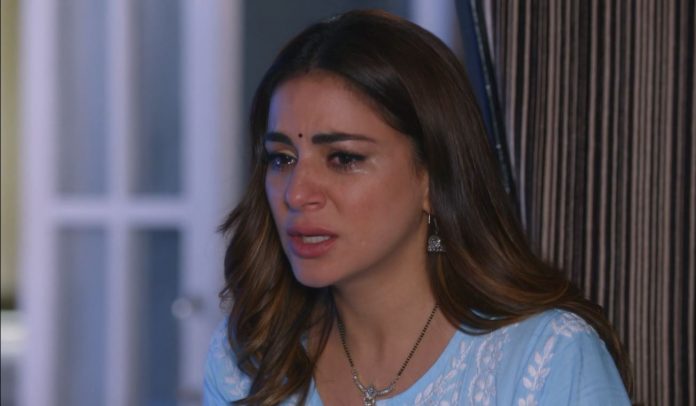 Kundali Bhagya 21st June 2021 Written Update Preeta in action Sherlyn finds Megha outside her room, and gets a shock. She asks Megha to just leave. Megha threatens Sherlyn and asks for the money. She tells that she will not spare Prithvi and Sherlyn. Sherlyn runs to Prithvi to tell him that Megha is threatening to expose her truth and get her arrested. She asks him if he would also surrender to the police to save her, reminding him of Karan’s move to save Preeta. She tells him that Karan really loves Preeta, this time Prithvi has to prove his love.

Prithvi refuses to get himself arrested for her sake. He tells her that he can’t give up on his freedom for anyone. She sadly condemns him for his fake love. She tells him that he shall help me in her plan to steal Rakhi’s jewellery, since she has to pay a hefty amount to Megha. He refuses to be her crime partner in the robbery plan. Sherlyn tells him that she can handle the robbery alone. She decides to rob Rakhi’s jewellery. Prithvi is scared that Sherlyn can get caught. He feels she is also turning rigid like her husband Rishabh.

Moreover, Preeta spends some alone time while recalling the fond memories with Karan. She sheds tears for Karan. She feels she is away from her husband just because of Sherlyn’s crime. She vows to get Sherlyn punished if the latter has really killed Akshay. She wants to forget pitying Sherlyn for the fact that the latter is pregnant. She just wants justice for her husband.

Preeta bumps into Sherlyn. She doubts Sherlyn’s intentions after seeing her weird behavior. Sherlyn tries to outwit Preeta. She asks Preeta not to keep questioning her. Preeta tells that Sherlyn’s weirdness is attracting more suspicion. Moreover, Sherlyn makes a plan to teach Megha a lesson. She calls Megha and asks her to accept her condition if she wants the money. She asks Megha to come and meet her at the hotel where Akshay was murdered. She scares Megha to get rid of her. Will Preeta just make woeful vows and never fulfill or really do something this time? Comment your views and keep reading.

Sherlyn looks for Rakhi and Mahesh. She doesn’t find them in their room. She thinks its a perfect time to rob the jewellery to help Prithvi. The sound alerts Preeta. Sherlyn doesn’t want anyone to know about her move. Preeta wonders if someone is in Mahesh’s room, since Mahesh has gone with Rakhi for a walk. She goes to check his room. Sherlyn gets the keys to unlock the safe. She steals the jewellery and makes a quick move out of the room.

She finds Preeta coming there. Preeta finds Sherlyn in the room. She cross questions Sherlyn about her presence in Rakhi’s room. Sherlyn tells her that she had come to meet Rakhi, she was just going to sleep. She adds that she is already rich, she doesn’t need to rob anything, she isn’t a middle-class person like Preeta. She answers Preeta to end her suspicions. Sherlyn leaves the jewellery bag in Rakhi’s room. Preeta doesn’t see the bag left there.

Sherlyn goes hyper that Preeta always hinders her best plans. She waits for Preeta to go to her room. She wants to go back to Rakhi’s room and get her bag. She has to give the jewellery to Megha to save Prithvi and her secret from coming out. Preeta feels Sherlyn was really acting suspicious. She tells that she will free Karan from the jail, she will find the person who really murdered Akshay.

She feels she is losing hopes. Sherlyn gets the jewellery bag. Megha calls her to remind that she is waiting for the money. Sherlyn rebukes her for the blackmailing. She tries to sell off the jewellery to get money. Meanwhile, Preeta visits Karan in the jail. She tells him that she is feeling positive, she is getting many good hints that he will be released and come home soon. She tells him that she is really getting good vibes, she is very happy and confident. He also feels confident on hearing her. Preeta cheers up Karan, while hiding her sorrow.

She tells that Megha isn’t ready to wait. He tells that she shouldn’t accept Megha’s conditions. She asks him to meet Megha and pay her the money to close the blackmailing chapter. He tells her that he can’t go right now, he is going out for lunch with Kritika. He adds that Kritika is feeling sorry and wants to make up for doubting him. She asks him to leave the lunch date and go to Megha. He tells that he can’t help it, he has to keep Kritika pleased. She tells that she will go and meet Megha herself. Sherlyn reaches the hotel to meet Megha and threatens to kill her, while Preeta and Shrishti look for the evidences there, unaware that Sherlyn is around. Will Preeta find out the truth before the hearing? Keep reading.

Reviewed Rating for Kundali Bhagya 21st June 2021 Written Update Preeta in action: 3/5 This rating is solely based on the opinion of the writer. You may post your own take on the show in the comment section below.