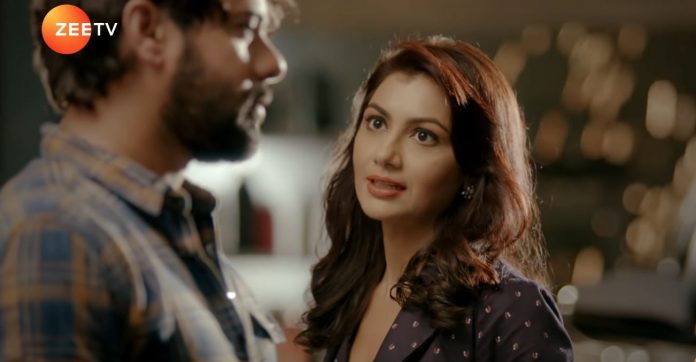 Kumkum Bhagya 5th July 2021 Written Update Open war Abhi asks Pragya is she alive. She tells him that they have no relation, she doesn’t mean anything to him, he doesn’t mean anything to her. She tells him that they can never have the same relation and terms like before, she is dead for him, and he is dead for her. Abhi can’t believe that she is his Pragya, his Fuggi, who he assumed dead in the accident. He doesn’t have any idea that Pragya accuses him for the deadly accident, while he has simply no involvement in the crime.

He can’t clarify her doubts since she doesn’t confront him. He holds her to hug and convince her that he is her Abhi, the rockstar. Sushma gets raging seeing Abhi trying to force his love on Pragya. She orders Abhi to stop his nonsense and leave. He asks Pragya where was she till now, why did she not come before, why did she change much. He asks her if its a joke that she is making him away. Sushma calls the security to throw out Abhi.

Abhi asks Pragya why did she live away from his life till now when she was alive and safe. Sushma makes Abhi leave from her house and Pragya’s sight. She finds Pragya falling weak seeing Abhi get away. Pragya recalls Abhi’s harsh words when he asked her to die and leave from their lives. Pragya keeps the hatred alive to stay strong. Abhi sheds tears of sorrow when he fails to know the reason behind Pragya’s estrange behavior.

Abhi and Pragya’s love story gets stuck on the same note of love, betrayal and loss of faith. They meet again at Sumit’s garage. She tells him that he had cheated her in love, fate and time have ruined him and took revenge for the injustice he did. She tells him that he had been unfair, she loved him, but he betrayed her. She feels his own actions got him cursed. He tells her that time will tell her who got cheated in love. He recalls Rhea’s suicide attempt because of Ranbir’s cheat and gets saddened. Pragya tells him that she will write the tale of his destruction. Abhi doesn’t care by her threatening, knowing her immense love will conquer over her hatred.

Prachi tells Pragya that she had got Abhi and his family, she got many relations in her life, but she lost everything because of Rhea. She wishes that Rhea didn’t come in their lives to ruin it. She feels lonely. Ranbir hugs her to pacify. Tanu doesn’t think Abhi will help her. She doesn’t think Abhi will meet Pragya for her sake. She realizes that Abhi will be arranging money for her bail or be with his friend to drink alcohol.

She doesn’t want to mention Pragya’s name. She knows that Pragya belongs to a different world now, Pragya will never meet Abhi in this birth. Pragya and Abhi come face to face. Abhi expresses his happiness seeing Pragya alive. Pragya rebukes him. He tells her that he got a pleasant shock seeing her alive. Pragya tells him that he should trust his fate. He tells her that their fate is same, they get separated and meet again.

He gets emotional out of happiness. He forgets their past issues that occurred at the time of Rhea’s marriage. He tells her that he is happy seeing her new look. He asks her if she likes him. He tells her that he doesn’t like to deck up since he lost Pragya, his love. He adds that he believed she is alive, they are actually made for each other. He has missed her a lot. He admits that he still loves her a lot. She tells him that she heard how much he loves his life. He tells about Baljeet’s belief that Pragya is alive. Pragya tells that people get blind and mad in love.

Abhi feels Baljeet’s prayer is answered, that’s why they have met by destiny. He adds that he has come to talk to her about Tanu. He asks her if she is still jealous. Pragya asks him why did he tell Sushma about his love for his wife Tanu. She wants him to stay away. Abhi tells her that he was searching for her since two years. She doesn’t care for him. She tells him that she just remembers what he did. He wants to know what does she mean. She tells him that she doesn’t care if he cares for Tanu.

He tells that he never cared for Tanu. She realizes that he doesn’t love her. He asks her to talk about them. She tells that she is not going to spare Tanu, she will get Tanu punished. He wants to know the reason for her cold behavior, like they have no relation. She tells him that he doesn’t mean anything to her, than Tanu’s husband. He wants his answers. She tells him that he has fallen down by crossing the lines of shame. He tells her that she had forced him to marry Tanu. She calls him shameless to beg for Tanu.

He tells her that she isn’t showing any emotions for him, her behavior is killing his heart. Sushma stops him from troubling Pragya. She ousts Abhi, who feels hard to live without Pragya. Abhi wants Pragya to reveal the truth. Sushma asks Pragya not to fall weak. She is glad that Pragya has shown her high status to poor Abhi today. Sushma consoles Pragya. Prachi finds Ranbir sleeping. She wants to find about Vikram’s condition. She calls Pallavi to know about Vikram. Pallavi doesn’t reply and hangs up the phone.

Abhi meets the Inspector to know about Tanu’s case. Inspector tells that Tanu will be presented in the court. Abhi tells Amit that the rich lady didn’t agree to withdraw the case. Tanu asks Abhi if she will get released. Abhi tells Tanu that he went to meet the rich lady, but she wasn’t there. He asks her if she met that lady. He confronts her. Tanu tells that she didn’t meet anyone. He asks her if she didn’t see the lady who was accompanied with police at the time of arrest. He knows that Tanu must be punished for the crime. He is helpless to help her for the sake of Baljeet. Tanu lies to him, thinking he didn’t meet Pragya. Abhi deals with his worries.

Reviewed Rating for Kumkum Bhagya 5th July 2021 Written Update Open war: 5/5 This rating is solely based on the opinion of the writer. You may post your own take on the show in the comment section below.