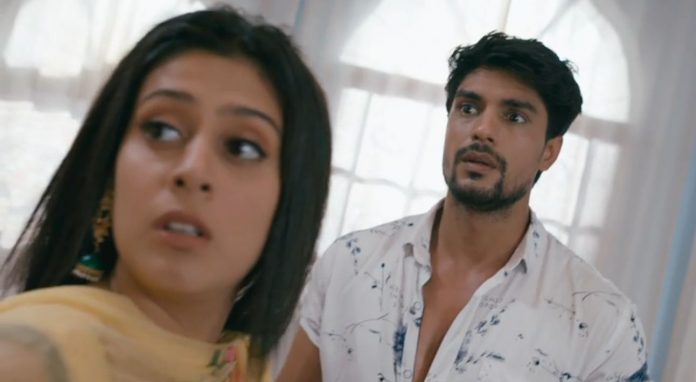 Udaariyaan 27th August 2021 Written Update Truth out Jasmin deliberately calls Tejo home to show Fateh and her in an awkward love moment. Jasmin has given three days time to Fateh. She doesn’t have any patience to wait until he finds a suitable time and tells the truth to Tejo. Jasmin hurries up in bringing the truth out in front of Tejo. She thinks once the truth is out, Tejo will herself choose her self-esteem over the unwanted marriage and step out of Fateh’s life.

Jasmin plans everything accordingly. Tejo comes home at the same time when Fateh comes to meet Jasmin. Tejo isn’t aware of Fateh and Jasmin’s affair. She is about to receive a big shock from Jasmin’s side. Fateh worries on knowing Tejo’s arrival. He didn’t expect Tejo to come on the same time. Tejo gets hurt while hurrying to see Jasmin. Fateh gets time to hide in Jasmin’s room before Tejo enters. Tejo meets Jasmin, who lies about Fateh with a plan.

Jasmin helps Tejo walk with the sprain. She gets Tejo to her room where Fateh is hiding. She wishes Tejo gets to see Fateh and understands their relation. Fateh doesn’t know Jasmin’s hasty plans. He thinks Tejo’s coming is a coincidence.

Fateh panics a lot. He doesn’t want Tejo to know the truth in this shocking manner. He wants some time to explain it to her. He seeks Jasmin’s help in hiding, while Jasmin tries to get him in Tejo’s sight. What will happen when the truth gets known? As of now, Fateh’s truth will still be hidden. There will be a hit and miss between Tejo and Fateh. Jasmin’s plan will fail. What will Jasmin plan next? Do you still love Jasmin and Fateh’s pairing? Leave your free views below. Keep reading.

Fateh asks Jasmin did she call Tejo. Jasmin lies that she had locked the door as well, she didn’t call Tejo home. Fateh asks Jasmin to hide him somewhere. Tejo falls down and calls Jasmin for help. Jasmin finds a good chance to get Tejo inside the truth. Fateh asks her to just keep Tejo outside. Jasmin asks Tejo how did she fall down. Tejo complains of the oily floor, which was also Jasmin’s plan against her. She wants Tejo to see Fateh. Fateh hides from Tejo. Tejo likes the cleaned up well.

Fateh forgets his phone there. He leaves in a rush. Tejo sees Fateh’s car and gets doubtful. Tejo asks Jasmin to take rest. Jasmin lies to Tejo. Fateh gets scared on realizing that he has left the phone in Jasmin’s room. Tejo cares for Jasmin. She asks if anyone had come to meet Jasmin. Jasmin tells that her friend visited her. Fateh’s phone rings. Jasmin worriedly hides his phone. Tejo returns home. She finds Fateh waiting. He pretends normal to clear her doubts. She tells him that she had gone to meet Jasmin at her home.

She reveals that Jasmin had called her home because of the severe headache. Fateh learns Jasmin’s plans. He confirms from Tejo that Tejo went on Jasmin’s call. He gets angry on Jasmin’s lie. He tells Tejo that he has no problem with their meeting. Fateh tells about important work and goes to meet Jasmin. He wants to confront Jasmin. He goes back to Jasmin’s home. Jasmin returns the phone. He angrily confronts her for trying to expose his truth to his wife. He reprimands her for lying to him.

She lies that she had called Tejo thinking he won’t be able to come. He tells that he had confirmed his coming already. He asks her why did she do this intentionally. He wants her to stop playing games with him. He asks her to think of Tejo’s emotional low. He asks Jasmin to confess her deliberate plans. Jasmin admits that she had planned to show their affair to Tejo. She tells that she feels he loves Tejo now. He wants her to stop the nonsense. Fateh and Jasmin get into a raging argument.

He tells her that he cheated his wife for her sake, but Jasmin has no faith on him. He can’t tolerate her games. He breaks up with Jasmin once again. He doesn’t want to stay in this relationship if she lies to her. She exclaims him that she has done everything for their sake. He asks her why did she keep her plans a secret from him.

He calls her a selfish person, who just thinks of herself. He calls their relationship over. Jasmin fails to stop him back. Fateh goes home in an upset mood. Tejo tries to cheer up Fateh in an uniquely sweet way. She tells him that she wants to throw away the bad spirit from Fateh’s side. He gets scared hearing her. She tells him that she will never tolerate any third person in their lives. She adds that nobody can trouble her husband. Fateh feels at peace with her.

Reviewed Rating for Udaariyaan 27th August 2021 Written Update Truth out: 1/5 This rating is solely based on the opinion of the writer. You may post your own take on the show in the comment section below.