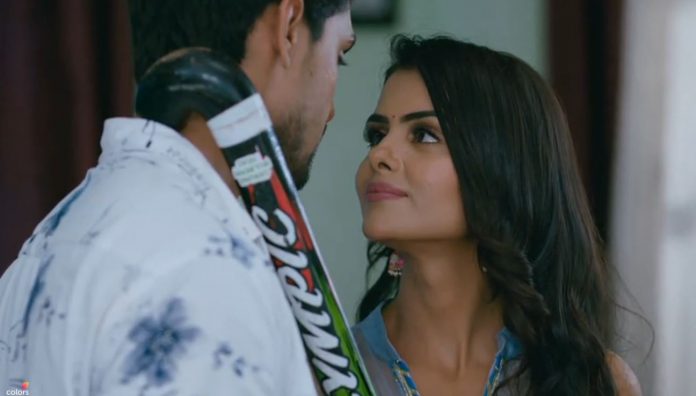 Udaariyaan 28th August 2021 Written Update End of Fateh Tejo Fateh goes to the mall where he spots Tejo and Buzo together. Tejo is shopping for Simran and helping Buzo. They share a laugh at the same instant when Fateh sees them together. Gurpreet’s words flash in his mind. Fateh believes Tejo as a righteous girl. He can’t think wrong about her. He shows faith on her, but still thinks to call her and ask. Fateh calls up Tejo and pretends to casually ask about her whereabouts. Tejo doesn’t want to tell Fateh about Simran and Buzo’s relationship so soon.

She lies to Fateh that she had come to the NGO to teach the kids. Fateh wonders what’s the reason that Tejo lied to him. He doesn’t think of any such possibility of Simran, knowing Simran is happily living in Canada. He calls up Buzo to clear his confusion. He asks Buzo where is he. Buzo also lies to Fateh to hide the fact that he is with Tejo. Buzo and Tejo were earlier connected because of Fateh and now because of Simran.

Fateh goes mad when both of them lie to him. He starts suspecting Tejo’s character. He thinks he is receive Tejo’s deceive when he is deceiving Tejo in his marriage. He can’t take such deceive, when he was trying to move on with Tejo by calling it over with Jasmin.

Meanwhile, Fateh reaches home, thinking of Tejo and Buzo’s assumed affair. Fateh can’t tolerate Tejo with someone else. He angrily breaks the glass window and gets his hand bleeding. Tejo returns home only to find Fateh with his bleeding hand and eyes filled with rage. Tejo asks Fateh the reason for his injury. Will Fateh confront Tejo about her meeting with Buzo, or tag her a cheat by deciding it himself? Will Fateh and Tejo’s relationship break with this suspicion? A big twist will be coming in the show. Keep reading to know more.

Fateh tells Tejo that he isn’t angry or upset. She suggests ways to vent out his anger. She asks him to share any matter, which she should know but he isn’t able to express. He can’t tell her anything. She tells that she will solve his problems only when he shares it. He avoids telling her. She knows to make his mood better. She arranges a candle light dinner for Fateh. Buzo comes at that time and tells that he came at a wrong time. She asks him to join them and tell some good jokes to make Fateh laugh. Buzo joins her.

Fateh gets Tejo’s chit. He likes her gesture. Buzo invites Tejo to come and join Simran and Candy’s celebration. She tells that she will lie to Fateh to make Candy’s special day more day. Buzo cracks a joke. Tejo laughs a lot. Gurpreet and Fateh see Tejo and Buzo dining in the lawn. They get a misunderstanding in their mind. Fateh asks Buzo how is he. Tejo and Buzo hide about Candy. Gurpreet wants Fateh to confront Tejo. Fateh’s mood gets better seeing his favorite dish. Gurpreet finds them happy and thinks she was wrong. Jasmin is upset on Fateh. She lies to the family. She tells that Sweety fought with her, she isn’t talking to her.

Bebe suggests her to take her friend out and calm her anger. Jasmin likes the idea. She decides to meet Fateh. She meets Fateh at the academy. She attempts to cheer him by asking him for a boxing competition between them. He asks her to leave. She tells that she wants to prove the power of her love. She apologizes to Fateh. She promises to never lie to him. He tells that he is fed up of her and their affair. He feels she is increasing his problems more. Bebe gets doubtful on Jasmin, when she meets Sweety in the market.

She realizes that Jasmin is seeing a guy again. She wants to know who is he. Jasmin hugs Fateh with an apology, even when he makes her away again and again. He forgives her. He asks her not to warn, blackmail or threaten him. She promises him. He accepts her love again. She asks him to accompany her on shopping. Fateh takes Jasmin to the mall for shopping. Tejo and Buzo shop for Simran and Candy at the same place. Fateh feels mistaken seeing Tejo with Buzo. Jasmin also sees Tejo and questions Fateh about them.

Fateh thinks Tejo is getting overfriendly with Buzo. Fateh calls up Tejo and Buzo. Both lie to him to cover up about Simran. Jasmin asks Fateh what did Tejo say. Fateh feels ashamed of his wife, seeing her with his friend. He doesn’t realize that he is cheating Tejo. Jasmin asks Fateh why are they lying to him. She tells that he should confront them. Fateh tells that its his personal matter, he will talk to Tejo himself. He goes home with the misunderstandings on mind. He hurts himself in anger.

Furthermore, Tejo meets Fateh at home. She finds him hurt. Though she cares for him genuinely, he thinks its just a pretence. He starts losing faith on Tejo. She buys a shirt for him. Fateh suspects her for having an affair with Buzo. Tejo finds him questioning a lot. She hides about Simran. Fateh expresses his husband’s rights on her and questions her to know what’s happening in her life. He feels he was dying in guilt for no reason, when Tejo herself is walking on a wrong path.

Reviewed Rating for Udaariyaan 28th August 2021 Written Update End of Fateh Tejo: 2/5 This rating is solely based on the opinion of the writer. You may post your own take on the show in the comment section below.