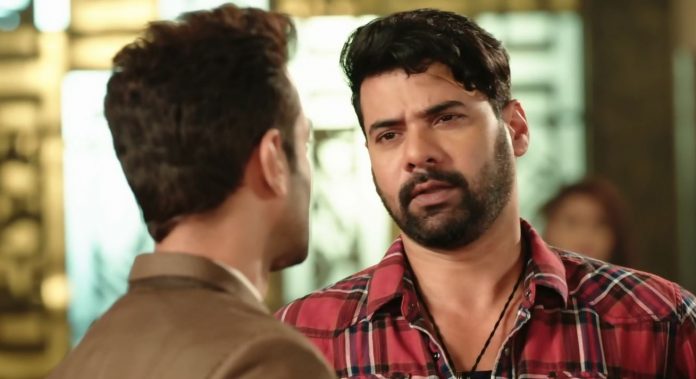 Kumkum Bhagya 2nd September 2021 Written Update Abhi’s revelation Abhi keeps reminding Pragya about their earlier marriage. He tells that he will stay in her house. He thinks Pragya is stubborn, she has insulted their past relationship by buying him. He didn’t imagine that he will have a sale price one day. He confronts Pragya for the decision. He tells that he will make her feel bad about her decision. Pragya asks him what does he want. Abhi doesn’t want her answers, if she would lie to him.

He tells Pragya that he has come as a contract husband, he is also her servant at home and office. They forget their tension and argue for the bed. Abhi asks her to change her habits when her life has changed. He blames her for snatching his peace. He wants to snatch her peace. Sushma keeps an eye on Abhi. He asks Sushma if she is spying on him. Sushma asks him to remember the contract marriage and never behave like Pragya’s real husband.

He replies that he is a dummy husband to show to Thapars and the society, he knows the truth, she doesn’t need to teach anything. Sushma tells him that it will be right if the relation is just a pretence. Tanu and Aaliya return to the chawl with the money bags. Tanu gets into a fight with a chawl lady. Aaliya controls Tanu.

Gaurav arrives at Pragya’s house, causing Pragya and Sushma to worry. Gaurav gets surprised seeing Abhi, and asks him if his security duty is at the house as well. Abhi tells Gaurav that he will always be with Pragya to protect her. Gaurav reminds him that he is just her bodyguard, nothing more than that. Abhi stands in front of Pragya. Abhi makes a shocking revelation to Gaurav that Pragya is his wife. Gaurav can’t believe this.

He tells that Abhi was just Pragya’s bodyguard before. Abhi tells him that Pragya is his everything, she means the world to him, he can become anything for her. He asks Gaurav to get lost from his house. Gaurav’s ego gets hurt. He angrily leaves. On the other hand, Rhea deliberately drops some fluid on the floor. She plans something evil. Pallavi falls prey to her plans. She walks down the stairs. Pallavi’s shocking fall causes tension in the family. The family runs to Pallavi.

Aaliya tells Mitali that Pragya has given the money by buying Abhi. Mitali tells that she wants to see the money. Tanu asks Aaliya to shut the windows, anyone can see the big amount. Mitali is shocked to see the money after a long time. She touches the notes to believe. Tanu tells Aaliya that the lady insulted her, she will buy the entire chawl and trouble the lady. Aaliya asks Tanu to do business with the money and tackle Pragya. She asks Tanu to bring down Pragya. Mitali wants to buy some sweets.

Tanu gives her the money. Tanu welcomes her lavish life back. Dida tells Pallavi that Prachi would need their help, its better to give the locker keys to Prachi. Pallavi feels that it will be unfair for Rhea. Dida tells that they can make Prachi prepare for puja, its not good if Prachi comes to ask for the keys again and again. Pallavi agrees to give the keys to Prachi. Rhea overhears them. She knows that Prachi had been gaining everyone’s sympathy. Prachi gives the good news to Ranbir that Abhi and Pragya will be living together now. He happily hugs her. He is happy that she united her parents.

Rhea gets jealous seeing them romancing. She wants to hug Ranbir. She feels Prachi has snatched Ranbir from her. She can’t let Prachi get the house keys. She spills the ghee on the floor. She goes to watch the drama. She wants Prachi to get blamed and fall in the family’s sight. Rhea thinks she has lost Abhi, now she won’t lose Ranbir. Gaurav comes to meet Pragya. Sushma informs the lawyer that Gaurav has come with his lawyer, they need to have a solution soon. Gaurav seeks her permission to enter the house. She asks him how did he stop. He gets seated. He doesn’t think Sushma is strict as she appears. She asks the lawyer to give the summon.

He tells Sushma that he had come to handover the summon personally, so that she doesn’t deny of receiving the summon to miss the court hearing. He asks her to call Pragya and make her receive the summon. He tells that he doesn’t trust Pragya, she may molest him again, its because she is really lonely. He asks Sushma to get Pragya married to someone, she needs a life partner. He tells her that Pragya’s misdeed had left him threatened. He insults Sushma by taunting on Pragya.

He asks Sushma to at least get a boyfriend for Pragya. He blames Pragya for molesting him. Sushma wants to give him an answer by slapping him. She tells him that when such filthy things are said about a woman, her husband gives a reply. She asks him to talk to Pragya’s husband. He tells her that he knows well that Pragya doesn’t have any husband. Sushma asks Abhi to come and meet Gaurav. She asks Gaurav to ask Abhi if he could care. Abhi makes a heroic entry, leaving Gaurav shocked to his inner senses. Gaurav asks if this is some poor joke that Sushma turned Pragya’s bodyguard into her husband.

Abhi tells that Gaurav is alive today, just because of Pragya, who stopped him from beating Gaurav that day. Gaurav tells that Abhi was her bodyguard. Abhi tells that husband is the best bodyguard. Pragya overhears Abhi’s defensive argument, and gets emotional. Rhea wants Dida to fall down and scold Prachi for the carelessness. She knows that Pallavi will not spare Prachi. Pallavi walks ahead of Dida and slips by the oily floor. Rhea gets worried, since she didn’t wish to hurt Pallavi. Pallavi falls down.

Rhea acts shocked as well, along with the other family members. Prachi tells that maybe ghee fell down on the staircase by her hands. Pallavi yells at Prachi for always messing up the work. She doesn’t think Prachi is responsible. She asks Dida to think if she fell down.

Ranbir also rebukes Prachi for her careless work. Dida feels bad for Prachi. Prachi apologizes to them. Ranbir attends the doctor’s call. Rhea consoles Prachi. Prachi feels she did a big mistake, she becomes wrong in everyone’s eyes. Rhea asks her to forget the matter. She asks how did Ranbir scold her, like he doesn’t trust her, if he really love her. Prachi breaks down. Rhea asks Ranbir to speak to Prachi, who thinks its Pallavi’s mistake too. She fills his ears against Prachi. Rhea attempts to create differences between them.

Reviewed Rating for Kumkum Bhagya 2nd September 2021 Written Update Abhi’s revelation: 5/5 This rating is solely based on the opinion of the writer. You may post your own take on the show in the comment section below.