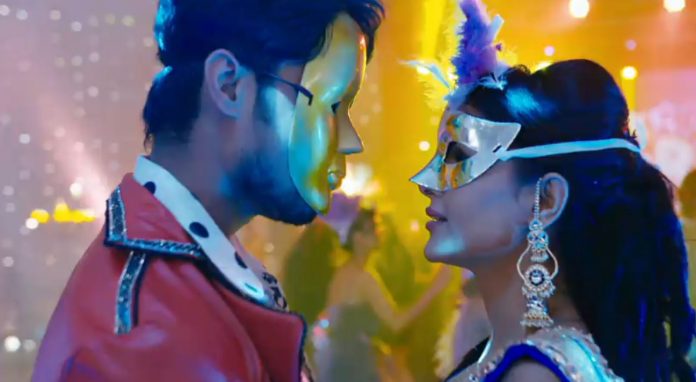 Udaariyaan 3rd September 2021 Written Update Fateh unmasked Fateh is called for the ring exchange ceremony. He sends the lady to his wife. The lady goes to Tejo to handover the flowers. Satinder misses to know that Tejo is Fateh’s wife. Tejo stays mistaken. She thinks Fateh has planned a surprise for her. Fateh and Jasmin get the masks for the masquerade.

Tejo tells Deepti that Fateh has come to surprise her. Fateh hears Tejo’s voice. Jasmin clears his confusion. Fateh and Jasmin dance on the floor. Tejo looks for him. Tejo comes face to face with Fateh on the dance floor, while they still have their masks put on. Tejo still identifies Fateh, but misses to talk. Fateh doesn’t see Tejo there. He is relieved. He doesn’t want Tejo to know about Jasmin and him suddenly.

Fateh is called on the stage by his friend. Fateh calls upon his wife, Mrs. Virk on the stage. Tejo thinks its his surprise that he has decided to introduce his wife to his friends. Tejo and Jasmin happily walk to the stage. Tejo gets late in reaching the stage. Jasmin reaches before her and goes to hold Fateh’s hand.

Fateh kisses Jasmin’s hand and welcomes her on the stage introducing her as his wife. Tejo falls back and cries in the huge moment of shock. She can’t believe seeing Fateh and Jasmin living a dual life, cheating the families. She sees Fateh and Jasmin sharing a kiss. Tejo slips in the huge trauma, seeing the unexpected. The truth finally comes out in front of Tejo. The confusion around Fateh’s wife gets cleared. Tejo learns about Fateh and Jasmin’s secret affair. Tejo’s presence leaves Fateh shocked. What will be Tejo’s next move? Keep reading. Comment your views on the shocking revelation.

Tejo imagines Fateh coming to reveal the surprise to her. She dances with him in her imagination. She misses him badly. She tells Deepti that she is missing Fateh. An interesting dance round begins on the stage, where the couples come to give exclusive performances. Fateh is also called on the stage with his wife, to perform on a special number. Tejo was waiting to see Fateh. She looks for Fateh anxiously. She smiles seeing him on the stage. Fateh gets on the stage and shares his happiness that his wife is his love, his best friend, his best companion. He calls his wife on the stage.

Jasmin reaches the stage before Tejo. Tejo is left in shock with this revelation. She fails to understand what’s going on there. Tejo slips in a big shock realizing the big cheat from her own sister, which she would never imagine in any nightmare.

Fateh and Jasmin give a rocking performance on the stage and show their romantic chemistry. Tejo is left stunned seeing Fateh and Jasmin’s shameful act. Fateh declares that he loves Jasmin, his wife. He shouts out his love for Jasmin loudly and bluntly. He tells Jasmin that he has no fear to shout to the world that he is in love with her. Jasmin tells him that she loves him too. Jasmin kisses Fateh and hugs him. Tejo breaks down in tears seeing their love affair evident in front of her eyes. Tejo is in disbelief, but can’t deny the truth.

Fateh and Jasmin don’t realize Tejo there. Tejo sees their shamelessness and gets numb. She never thought that they both will cheat her in this manner. Jasmin tells that Fateh is the one who made her belief on love true. She shouts her love for Fateh. They both admire each other and act as a married couple. Tejo feels breathless seeing their romance on the stage. Tejo can’t tolerate the sight of their closeness. She goes aside and weeps. She breaks down seeing Fateh and Jasmin happily living a fake life. She thinks its their reality, and Fateh had been faking happiness in his marriage. She gets angered on herself for believing him. Tejo recalls Fateh’s lies. Things get cleared in front of her eyes. She cries on her fate.

Tejo screams out her pain. She sinks in the pain of the biggest deceive of her life. Her soul cries that she failed in love. She runs away, thinking she can run away from the sight that had shaken her soul. The visuals doesn’t fade down in her eyes. She weeps a lot. Its a heartbreaking scene of Tejo’s emotional breakdown. Jasmin likes the night spent with Fateh. Fateh is also happy. She asks him to gift a bigger ring to her, than the small ring he gifted today. She tells that she wants to tell everyone that he loves her a lot, by showing off the big costly ring.

Fateh finds much difference between Tejo and Jasmin. He realizes that ring never mattered to Tejo, like it matters to Jasmin. He realizes that Jasmin is equating his love with the ring. He asks her if she isn’t happy. Jasmin fails to explain him. Fateh asks Jasmin to go before anyone sees them together. Jasmin doesn’t want to go away from him. He asks her to tolerate their distance for some days, he is going to book the tickets for their Canada trip and go away from everyone. Tejo arrives home and shatters with Fateh’s memories coming in front of her eyes. Stay tuned.

Reviewed Rating for Udaariyaan 3rd September 2021 Written Update Fateh exposed: 5/5 This rating is solely based on the opinion of the writer. You may post your own take on the show in the comment section below.