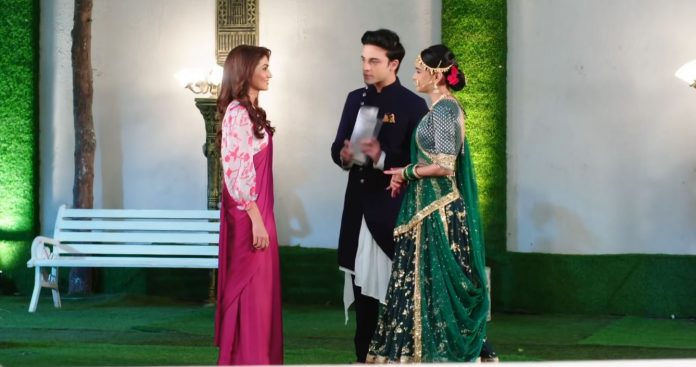 Kumkum Bhagya 9th September 2021 Written Update New twist Vikram gets enraged when the Kanha idol was going to fall down because of Prachi’s negligence in her arrangements. He can’t tolerate anyone playing with their devotional sentiments. He tells Pallavi that she has done wrong to give such a big responsibility to Prachi, who isn’t worthy enough to look after the responsibilities well. Prachi fails to explain Pallavi and Vikram that she didn’t do anything purposely, but it was an accident. Prachi doesn’t know that Rhea is behind the evil plotting.

He asks Pallavi to keep a watch on Prachi and not give any big responsibility to her again. Pallavi gets alert. Ranbir takes Prachi to meet Pragya and cheer her. He tells Pragya that Prachi is really sensible, thanks to Pragya who raised her so well. He praises Prachi to the level that Pragya feels proud of her. Keep reading for a full update.

He wonders if Prachi did the mistake herself unknowingly. Dida checks the swing and wonders if anyone had cut the railing intentionally to make the idol fall down. She suspects Rhea. Vikram tells Pallavi that Prachi’s mistakes are too big, it can’t happen unknowingly. Dida knows that Prachi can’t add the garlic in the sweets, she can’t spoil her own work when its about devotion. She thinks if Rhea is behind all the plotting to frame Prachi. Dida takes Rhea for a talk, while Vikram misunderstands Prachi’s intentions.

Vikram and Pallavi assume that Prachi is hurting them respect and reputation. He wants to support Pallavi when he gets okay. She tells him that Prachi has blinded Ranbir with her love, he doesn’t see her mistake. Vikram tells that Ranbir will see things clearly once he gets his love blindfold away. Prachi meets Pragya, who compliments her. Ranbir is glad to see Pragya after a long time. Pragya thanks him for taking good care of Prachi. She tells that he understands her, while others blame her for buying her husband.

He tells her that he knows that she was too angry but subsided all the differences to take care of Abhi. He talks maturely. He tells Pragya that credit goes to Prachi, who changed him completely. He gives Abhi’s medical reports to her. Prachi tells that Abhi’s liver is damaged, he shouldn’t drink more. Pragya tells that Abhi always crosses limits, he is still drinking. Prachi asks her not to get angry and make Abhi quit drinking. Pragya tells that Abhi is partying with his friends and drinking a lot. She tells Prachi that she will make alcohol out of his life. Ranbir asks her not to worry for Prachi.

He asks Pragya to convince Prachi to come for a long drive. Pragya asks them to enjoy the drive and have fun. Abhi entertains himself by playing really silly games with his friends. Pragya is shocked to see this madness, when Abhi’s friends wear her sarees to perform a catwalk. Pragya angrily takes Abhi with her. Dida asks Rhea to tell the truth herself. Rhea asks Dida if she is upset with her.

Dida asks Rhea not to act good. She asks Rhea to admit the truth. She tells that she knows that Rhea has spoiled Prachi’s work. Rhea admits that she has done everything against Prachi. Dida asks why does she hate Prachi, her sister. She rebukes Rhea. Rhea changes her words. She claims that she loves her sister, and can never do anything against her. She knows Dida hates her. She asks Dida not to suspect their blood relations. She adds that Dida doesn’t trust her, that’s the reason she is regarding her wrong. She lies that she isn’t jealous of her sister, she isn’t the old Rhea now.

She tries to win Dida’s faith. Siddharth asks Rhea to attend the guests. Rhea overhears Siddharth and Dida’s conversation. Dida asks him if he is happy in his marriage. He tells that he is really happy. Dida blesses him. Abhi tells Pragya that his friends will misunderstand if she gets him to the room. He wants to go and finish his drink. Pragya hinders him from drinking. Abhi asks her if she is worried for the costly wine. Pragya tells him that she isn’t stopping him for the sake of money.

He asks her not to dominate him as a wife. She gives reasons to stop him. She tells that occasional drinking is fine, he shouldn’t drink every day. He asks her to join their party. He feels she has a problem with his happiness. He tells that he will leave with his friends and drink as much as he wants. She stops him from leaving.

Reviewed Rating for Kumkum Bhagya 9th September 2021 Written Update New twist: 1/5 This rating is solely based on the opinion of the writer. You may post your own take on the show in the comment section below.