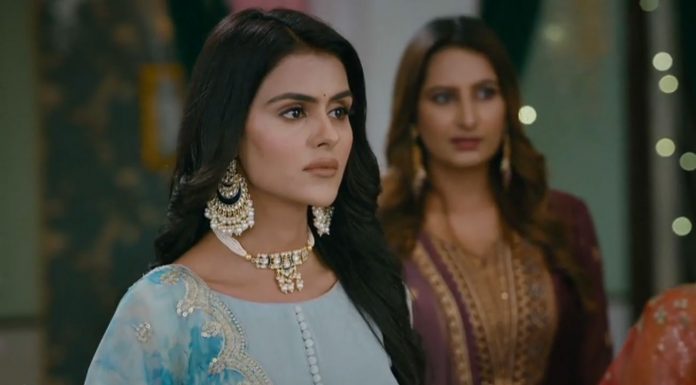 Udaariyaan 18th September 2021 Written Update Amazing Tejo Its a Balle Balle moment for Tejo when she catches Jasmin with the dead rat. Its a good scene of Tejo exposing Jasmin’s evil act in front of the family. It shows how strong and determined Tejo has become. Tejo has decided to not support and tolerate Jasmin’s filthy mind. She calls Jasmin the real reason for the bad smell spread in the room. She means that Jasmin is the rotten link ruining the family. Jasmi continuously denies the blames from Tejo. She acts helpful and concerned for Tejo.

Tejo doesn’t need any evidence further. She has caught Jasmin red-handed, knowing Jasmin has turned mad for her obsession towards Fateh. She realizes that Jasmin doesn’t even love Fateh truly, she just wants to bag him like an offer. Tejo rebukes Jasmin to scare her and make her confess the crime. Jasmin’s selfish side gets seen by the family. Fateh is disturbed knowing Jasmin is really at fault. Tejo proves Jasmin wrong in front of the entire family and also Fateh. Jasmin is left with no option than to take Fateh’s support.

She wanted to oust Fateh from the house. She didn’t know that she will get ousted by her own mistakes. Tejo makes up her mind to not tolerate any wrong blame on her from now, since Fateh has already accused her for having an affair with Buzo. She doesn’t accept anyone’s nonsense. She puts Fateh in a dilemma about supporting Jasmin this time when he knows that she is totally wrong. Jasmin has always justified her actions taken for the sake of her love for Fateh. She gets speechless when her act gets known to everyone.

Jasmin tells Tejo that she can’t get everything for her all the time. Tejo tells the same to Jasmin, that the latter can’t always win by her unfair means. She reprimands Jasmin. Jasmin reminds that Tejo will be leaving from Fateh’s life and house in some days after the divorce completes. Tejo tells her that she will not tolerate her evil, she can’t snatch her room or anything else by her cheap tactics. She wants to answer Jasmin’s every move.

Jasmin tells that Tejo has signed the papers, she can’t threaten her, nothing will help her now. Tejo gets the divorce papers she signed. She tears the divorce papers in front of everyone. She refuses to divorce Fateh, just to keep Jasmin stuck in his life at the same point. She gives a befitting reply to Jasmin by calling off the divorce. Fateh and Jasmin are left in shock by Tejo’s move. Isn’t Tejo really amazing this time? How will Jasmin justify herself this time? Will Fateh stand by Jasmin? Keep reading.

Jasmin tells everyone that Tejo is lying, she isn’t able to accept that she has lost Fateh. She tells that she isn’t lying, she got what she wanted, she doesn’t need to do anything. She asks Tejo to know that she has nothing left in the house and leave from their lives. She blames Tejo for defaming her and making her fall in everyone’s eyes. She asks Tejo what is she doing in the house when Fateh has given her divorce. Khushbeer takes a stand for Tejo, while Fateh takes a stand for Jasmin. Fateh tells that Tejo shouldn’t be here when everything is over. He asks them not to complicate the things.

Tejo tells that she signed the divorce papers to make everyone’s life easy. She reprimands Jasmin for testing her patience. She asks Jasmin will she snatch the house from her by her cheap games. She doesn’t think Jasmin will win. Jasmin tells that her threatening won’t work now. Tejo breaks Jasmin’s illusion by showing what she can do. She brings the divorce papers and shreds it in front of them. She tells that she was silent, but Jasmin has forced her to do this. Khushbeer and family get happy with Tejo’s move.

Jasmin didn’t imagine that her move taken to oust Tejo from the house will bring Tejo back in his life. Tejo refuses to divorce Fateh. The family stands with Tejo. Tejo tells that she will stay in the same room and same house. She challenges Jasmin to do anything she wants. Jasmin begs them to believe her, Tejo is falsely accusing her. Khushbeer asks her not to lie further, they believe Tejo only. Jasmin asks Fateh if he thinks that she can do such a thing. Fateh supports her. He tells that he will trust Jasmin, if they all trust Tejo. The family consoles Tejo.

Fateh asks Jasmin to tell him the truth at least, he will support her. He asks her how did she know about the rat in the AC vent. Jasmin doesn’t tell him the truth. He tells that he isn’t doubting her, he just wants to know the truth. She lies to him that Tejo had planned this to frame her. He doesn’t believe her. She gets insecure that Tejo will make Fateh away from her. Khushbeer worries that Jasmin is really cunning. The family wants to prove to Fateh that Jasmin isn’t good for him. They decide to come up with a dramatic plan to expose Jasmin’s truth. Fateh tells Jasmin that Tejo can’t do this.

Jasmin asks him not to show faith on Tejo. She ousts him from the room. She doesn’t want Fateh to suspect him. Fateh finds Tejo speaking to a man. She tells the man that the parcel doesn’t belong to her. Fateh suspects Tejo when he sees the man with the rat. The man lies to him that Tejo had called him. Jasmin thinks Fateh won’t doubt her now. Its her plan to make him against Tejo. Fateh finds Tejo taking care of Biji. He doesn’t tell her anything for Biji’s sake. He complains of a headache. Tejo gives him medicines. Jasmin finds him not scolding Tejo. She wanted him to blast his anger on Tejo.

She asks Tejo to stay away from Fateh. Gurpreet tells Biji that Nimmo and she are going in the kitty party. Biji asks Tejo to see Mahi and her drama. Mahi invites Fateh’s friends home. Fateh gets glad to meet them. He tells that he was busy with family and academy. He plans to take them out for coffee. Biji meets his friends and asks them to have tea at home. Biji asks Jasmin to prepare the snacks for Fateh’s friends. She burdens Jasmin with the kitchen tasks. Jasmin gets troubled. Biji tells Tejo that they shall explain Fateh about Jasmin’s real useless qualities. Jasmin tries to make the snacks.

Biji sends Mahi to check on Jasmin. Mahi takes some snacks to taste the snacks. Biji dislikes it. Tejo wants to go and help Jasmin, for the sake of Fateh’s respect. Biji asks Tejo to let Fateh know the truth of Jasmin, if she is capable of not. Khushbeer also gets his friends home. Fateh asks Jasmin to look after Khushbeer’s friends. Fateh and his friends eat the spicy salty snacks. Fateh worries that Jasmin will serve the same snacks to Khushbeer’s friends. He worries for the huge blunder, that will trigger Khushbeer’s anger.

Reviewed Rating for Udaariyaan 18th September 2021 Written Update Amazing Tejo: 5/5 This rating is solely based on the opinion of the writer. You may post your own take on the show in the comment section below.