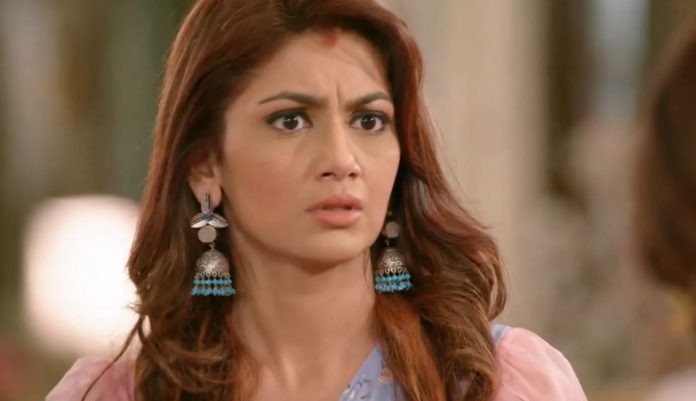 Kumkum Bhagya 20th September 2021 Written Update Pragya’s plan Rhea stops Siddharth from telling anything to Ranbir. She tells him that he has hurt her a lot by sharing their personal things with Ranbir. She cries to tell him that she was waiting for him all day and even called him, she got to know that he came home early from office, she was so happy to meet him, but now she hates him for his mistake. Siddharth apologizes to her. He promises to never tell anything to Ranbir about their relation. Rhea manipulates Siddharth. Later, Rhea meets Ranbir to emotionally influence him.

Ranbir decides to help Rhea and Siddharth make their marriage successful. He tells Rhea that he is always there for her to help her like a friend, because she did a lot for the family. He believes Rhea, knowing Rhea has changed, as Prachi told him before. Elsewhere, Pragya tells her plan to Sushma. She tells that Tanu and Aaliya have everything they wanted, they have the richness and status back, its the right time to strike and take revenge on them.

She plans to snatch everything from them. She tells that she will show them their right place and teach them a lesson. Sushma supports Pragya in her plan. She is relieved that Pragya didn’t get generous to get Tanu and Aaliya home, but its actually her plan to destroy them. Pragya has no idea that even Tanu and Aaliya are coming to stay in her house to destroy her. Who will destroy who? What do you think who will win this time? Comment your views and Keep reading for a full update.

Mitali gets excited to know that they will be leaving the chawl house and go to stay with Abhi. She feels its a big lottery. Baljeet is just happy that she will be staying with Abhi and Pragya. Pragya finds Sushma worried. She asks Sushma if she is upset. Sushma tells that she didn’t discuss with her and took the decision. She asks why did she ask Tanu and Aaliya to come home to stay. She knows Tanu and Aaliya will trouble them and snatch their peace. Pragya knows it. Sushma asks why did she invite them.

Pragya knows Sushma’s concern. She tells that she will control Tanu and Aaliya, it will be good to keep them at home, her revenge motives will get easy to accomplish. Sushma supports her. On the other hand, Rhea tells Siddharth that he has blamed her many times, but she wanted to clear his mind. She tells that she hates him for breaking her trust. Ranbir meets Prachi. He helps her in work. She finds him worried. He tells that he doesn’t know what to tell her. She asks him to share the matter. They get scared seeing a flying cockroach. She tells that she can’t live in the room with the cockroach.

He stops her from going to Dida’s room. She asks him to catch the cockroach and take a selfie to send it to her, then she will come back. She goes away. He feels his romance is always ill-fated. He looks for the cockroach. Rhea tells Siddharth that she is feeling terrible, he doesn’t respect her or their marriage. He asks her not to say this. She tells that she will tell what she actually feels. He asks her when did he disrespect her. She tells that he went to tell Ranbir about their problems.

She adds that she didn’t tell Prachi that he mentally tortures her. Siddharth asks what is she saying. She tells that he has doubted her about Ranbir, he doesn’t insult her in front of anyone. She asks him to leave the room, and give her some space. She advises him to never share his problems with anyone and solve it himself. She ousts Siddharth, who becomes a fool to believe her. Rhea wants her Ranbir back. She finds Prachi and Dida talking. Prachi tells Dida that she will sleep in her room. Rhea thinks its a great chance to meet Ranbir and get his sympathy, so that he cares for her and starts liking her.

She wants Ranbir to fall in love with her. Rhea finds Ranbir looking for a cockroach. She asks for Prachi. He tells her the upsetting cockroach’s story. She tells that Prachi is lucky to get him. He replies that he is lucky to get Prachi. She cries in front of him. She tells him that she had to marry him, but it couldn’t happen. He asks her to understand that he loved Prachi and married her. She asks him what about her dreams, it was her fate that she couldn’t marry him. She tells that her marriage with Siddharth is totally disturbing. She exclaims that she doesn’t know Siddharth, they both aren’t able to connect, they have a regret that they got married.

She feels sorry to express her emotional pain. She informs him that Siddharth is sleeping in the living room, if Pallavi sees him, then it will be a big drama. She weeps a lot. Ranbir consoles her. He assures that he will talk to his brother, Siddharth and explain him well. She asks him if she doesn’t mean anything to him. He tells that she is his friend, he will talk in her favor. She doesn’t want him to talk to Siddharth. He adds that she is important for him. She tells that Siddharth may think that she was complaining about him and may take this otherwise. He asks her not to think so, because she didn’t complain anything. He wants to talk to Siddharth once.

She begs him to not discuss anything with Siddharth, the situation can spoil for her. She makes Ranbir promise her that he will keep their conversation to himself. Ranbir promises her. She tells him that she knew it well, that he will understand her. Ranbir feels terrible that Rhea’s life isn’t going smooth. He wants to bring Siddharth and Rhea together, to make them a happily married couple. Keep reading.

Reviewed Rating for Kumkum Bhagya 20th September 2021 Written Update Pragya’s plan: 3/5 This rating is solely based on the opinion of the writer. You may post your own take on the show in the comment section below.