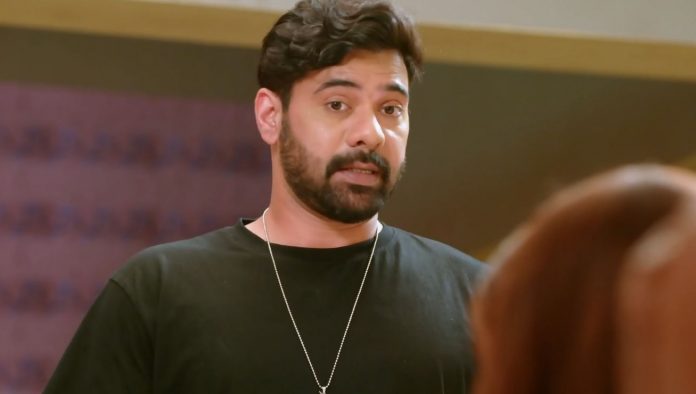 Kumkum Bhagya 25th September 2021 Written Update Abhi is back Abhi tells Pragya that she doesn’t care for him, she is one of the selfish persons who stayed with him during his best days. He tells that he has seen her living a good life, away from him, once his sufferings started. She wants to tell him the truth but on some other day. She gets hurt seeing him drink. She asks him how did he find the alcohol. Aaliya and Tanu had planned to give him the alcohol. Abhi doesn’t tell this to Pragya. He asks her to live and let her live. He requests her to leave him alone. Tanu tells Tai ji that Baljeet didn’t get against Pragya. She wanted Baljeet to come on their side.

Tai ji tells that she didn’t fail, Baljeet will get affected by her words soon. She asks Tanu to wait and see Baljeet’s drama. Tanu doesn’t want to wait for long. Tanu had planned to make the alcohol reach Abhi to please him and make him away from Pragya. Aaliya wants to win with Abhi’s support. She doesn’t think Pragya can reform Abhi. Aaliya plans to snatch everything from Pragya. Pragya confronts Tanu about giving the alcohol to Abhi. Tanu swears that she didn’t pass the alcohol to him. She asks Pragya why did she refuse to buy Abhi before and then buy him for saving her image. She asks Pragya why does she care for Abhi so much, if she loves him again.

Pragya tells that drinking isn’t allowed in her house. She goes away. Tanu worries to think if Pragya has fallen in love with Abhi again. She is afraid that they may unite because of their love. She doesn’t want them to unite. Abhi drinks and falls asleep. Pragya leaves him to sleep on the sofa and get a back ache. Abhi asks her to care for herself, he isn’t sleeping, but just resting. He tells that he isn’t drunk. He asks her if she hates him. She tells that she doesn’t hate him.

He asks her if she loves him. She tells that she feels something that’s between love and hatred. He tells that its called liking, she likes him and his smile, that’s why she stares at his smiling face every morning. He asks her to remain his fan as before, and he will be kind towards her. They share a moment.

Meanwhile, Rhea is glad that Siddharth isn’t with her. She plans to go to Bangalore with Ranbir and spend time with him. She is thankful to Siddharth for the letter. She thinks Pallavi will help her. Dida makes the special dish for Vikram. Ranbir tells that its his favorite dish as well. He is happy with the family. Ranbir and Prachi have a moment. Rhea makes an upset face to get Pallavi’s help. Pallavi asks Rhea why is she in tension. Rhea tells that Siddharth has left a note for her and went to Bangalore. She shows the note. She tells that he had gone to Bangalore without informing her.

Pallavi asks what does she mean to say. Rhea tells them about Siddharth and her little fights. She tells that she told him about her friend’s marriage held in Bangalore, but he didn’t take her along. She sounds depressed. Pallavi consoles Rhea. She doesn’t think Rhea is overreacting. She asks Ranbir to call Siddharth. She wants to speak to Siddharth. Rhea stops Ranbir from calling Siddharth. She doesn’t want any problem in her plan. Ranbir calls Siddharth and tells that Pallavi wants to talk to him. Pallavi questions Siddharth about leaving the letter and going to Bangalore without informing anyone, not even his wife.

She tells that she is upset with him. She asks Siddharth to apologize to Rhea. Rhea disconnects the call and fakes the conversation in front of the family. Pallavi tells Siddharth that Rhea is coming to Bangalore. She advises him to never hide anything from his wife. Siddharth doesn’t understand why Pallavi is so angry. Rhea tells that she feels scared to travel alone. Rhea cries and gets Prachi’s sympathy. Prachi asks her to ignore the small misunderstandings. Rhea asks her if she is regarding her wrong. Prachi defends her good friend Siddharth. She tells that Ranbir doesn’t care for such small issues. She praises her husband.

Pallavi asks Ranbir to take Rhea to her friend’s marriage. Ranbir promises Prachi that he will never see anyone else until she is with him. Prachi trusts him and lets him go with Rhea. Furthermore, Abhi gets back in his old form and challenges Pragya that he can get back into the business to earn for himself. He doesn’t want Pragya’s pity or permission. He tells that once he earns his living, he will buy alcohol for himself and drink, while Pragya won’t have any right to stop him. Abhi gets back to build himself from the scratch. What will happen ahead? Will Rhea’s truth come out in front of Prachi and Ranbir? Comment your views and keep reading.

Reviewed Rating for Kumkum Bhagya 25th September 2021 Written Update Abhi is back: 3/5 This rating is solely based on the opinion of the writer. You may post your own take on the show in the comment section below.