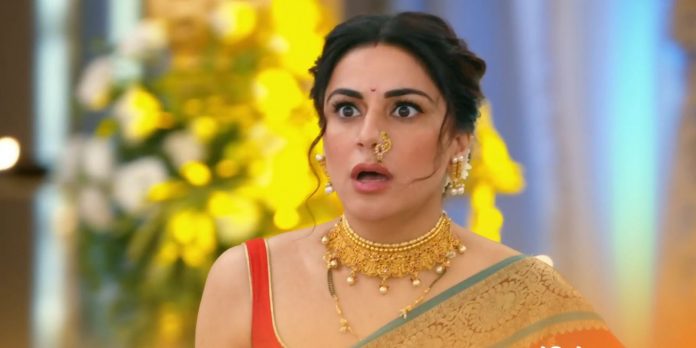 Kundali Bhagya 24th September 2021 Written Update Luthras attacked Sonakshi stays unaware of Sarla’s presence in her room. She discusses her plans with Yashvardhan about winning Karan and the entire Luthra family. She shows her true face, that she cares the least about Pihu. She just wants to use Pihu to get close to Karan. She is hopeful that once Pihu accepts her as a mother, then Preeta will herself step back and unite her with Karan. Sarla overhears Sonakshi’s conversation, while being in an semi-conscious state.

Sarla calls out Preeta when the latter arrives there, but fails to get any help. Preeta doesn’t find Sarla anywhere. She goes for the puja on Kareena’s word. The Luthras complete the puja with all their heart and happiness. Rakhi asks Karan and Preeta to distribute the sweet boxes and baskets to the guests. None of the family members are aware that there are actually drugs in the boxes, instead the sweets. Karan and Preeta start distributing the sweet boxes to the guests.

Marcos grows worried seeing the boxes getting distributed. His aides tell him that they can’t recover the drug boxes once the distribution is done. They ask him to take some big step and stop the distribution at once. They ask Marcos to stop the guests from leaving with their drugs boxes.

Marcos agrees to bring out his truth. He fires a gun to stop the distribution of the boxes. Luthras and guests get a huge shock on hearing the gun shot. Marcos threatens them and asks them not to leave. Rakhi, Karan, Preeta, Mahesh and Rishabh realize that the band artists roaming in their house since sometime are actually the drug smugglers. The Luthras get worried when they get under the sudden attack. Pihu gets caught by the goons. Sonakshi decides to save Pihu and earn some brownie points. She wants to take an advantage of the situation and impress the Luthras. What will happen next? Keep reading.

Rishabh and Karan try to protect their family from Marcos. Marcos and the aides ask them to step back. Marcos tells them that he wanted to take their drugs and leave, but they have turned him helpless. Rakhi isn’t scared seeing the gun and lectures Marcos. Kareena asks Rakhi to understand the danger on them. Mahesh asks the goons to sing a song and get the payment, instead getting mad to threaten for money. Mahesh takes the gun from the goon’s hand. Preeta tells that its the real gun. Mahesh tells that its a fake gun.

He shoots in the air. The family gets shocked when the gun is proved to be true. Prithvi protects Kritika and Sherlyn. Marcos asks Mahesh to stand with his family, instead troubling them. Marcos asks for the sweets boxes. He asks them not to let any guests take the boxes. The goons snatch the boxes from the guests. Preeta asks Pihu to go to the room and hide. She asks her not to come out until she comes to find her.

Bani asks the goons why are they showing the gun to threaten them just for sweets. She finds them foolish. Marcos reveals that they are drug peddlers, he isn’t wanting sweets, but their drugs. He admits that he had disappeared the guards from the gate. Mahesh and entire family get worried. Marcos and his aides fail to find the drugs. They find sweets in almost all the boxes. Marcos asks them to find the drugs. He asks them who has acted smart and stolen their drugs. He gets Bani at gun point. The family asks Marcos to leave Bani. Marcos threatens to shoot Bani.

Preeta stops Marcos from harming any of the family member. She tells him that she had exchanged the drugs with sweets in the boxes. Sarla gets consciousness. She sees Pihu coming to hide in the room. She tries to alert Pihu some way and get help. Pihu finds her tied up. Sarla gets freed by Pihu’s timely help. She thanks Pihu. Marcos asks Preeta to bring the drugs. He asks how did she know about the drugs. Preeta tells that she had doubted them when Pihu told her that they are stealing the boxes, she had checked the drugs and packed it separately. Bani asks why didn’t she inform the family.

Preeta tells that she didn’t know who to inform and give tension. She didn’t want the family to fall in danger. Kareena feels Preeta should have told them. Rishabh and Rakhi tell that Preeta can never do wrong. Sherlyn blames Preeta for putting them in bigger danger. Preeta tries to indirectly tell the family that she has handled the matter already. Marcos asks her where did she keep the drugs. He asks his aides to go and check the guest room. Marcos plays the guitar and sings badly to torture the Luthras. Shrishti asks the goons to go to the washroom and take the drugs. Sarla asks Shrishti to come with her. Shrishti and Sarla lock the goons in the guest room. Shrishti feels proud of Pihu for saving Sarla.

Sarla asks her to inform the police. Karan, Rishabh and Prithvi come up with a drama to fake a fight and divert the goons. Rishabh argues with Prithvi. Goon tells them that Prithvi had a big fight with his wife, he is already troubled. They ask Prithvi if Kritika and he had a fight. Prithvi doesn’t want the goon to mention Sherlyn’s name. The goon asks them to ask Prithvi and his wife about the fight. He tells that Sherlyn is Prithvi’s wife. Sherlyn hides behind Kritika. Prithvi apologizes to them. The Luthras conquer over the goons and fight them. The goons catch Sarla at the knife=point, leaving the family more tensed.

Reviewed Rating for Kundali Bhagya 24th September 2021 Written Update Luthras attacked: 3/5 This rating is solely based on the opinion of the writer. You may post your own take on the show in the comment section below.