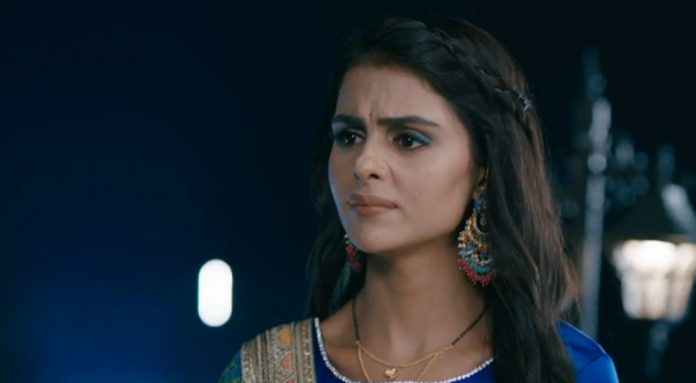 Udaariyaan 25th September 2021 Written Update Tejo ousted Tejo shows Jasmin the truth that she stands nowhere in Fateh’s life. Tejo doesn’t like hurting Jasmin, but she is also much hurt because of her sister. She never imagined to see this day. She always supported Jasmin thinking she is kiddish, but now she realizes that Jasmin is really selfish to think just for herself. She regrets that Jasmin has failed as a daughter, sister and lover also. She tells that Jasmin had failed their parents and their upbringing.

He doesn’t know that she planned the huge insult by inviting Khurana and locking Tejo backstage. He calms her down and feels guilty that Jasmin is so hurt. She wants to get his wife’s status just to answer Tejo. She accuses Tejo for insulting her when she was making a sacrifice by staying backstage in the event. Fateh gets fooled by her fake tears. She just wants to win over Tejo, who has challenged her to snatch Fateh if she can. Jasmin gets Fateh in her words and asks him to divorce Tejo at the earliest.

Fateh realizes that Tejo and Jasmin can’t stay under the same roof. He seeks help from Gurpreet, who is the only person understanding his sorrow. He asks her to think of Tejo’s pain, since its not easy for Tejo as well to stay in the same house with Jasmin. He wants his happiness and love, despite his huge mistakes. He doesn’t think he is at fault, if the fate played with him. He believes Jasmin is true and compromising a lot for his love. He wants Tejo to leave from the house just to maintain peace in his life. He didn’t think he will lose his name and respect this way.

He convinces Gurpreet to support his love for Jasmin, because his intentions are not bad. He tells that he doesn’t want to hurt Jasmin and Tejo. He gives her the big responsibility to convince Khushbeer to release Tejo from their family. He tells that Khushbeer will understand if she shows him that Tejo is also in pain. He wants Gurpreet to send away Tejo, and ease out his life. Gurpreet wants his happiness at any cost. She doesn’t think much and agrees to him. Gurpreet tells Tejo that Khushbeer has brought her home by making her a daughter, if he is like her dad, then it would mean that she would regard Gurpreet as her mum.

She asks Tejo to respect her word as she respected Khushbeer’s word. She asks Tejo to leave the house to keep her word. She makes the shocking request, which Tejo didn’t expect. The family is also shocked, since Gurpreet and Biji were planning to unite Fateh and Tejo before. Gurpreet doesn’t want to show Jasmin’s truth to Fateh if it affects his happiness. Tejo gets helpless to agree to Gurpreet. Tejo realizes that Jasmin has triggered Fateh once again. She knows that Jasmin can never become a good person like her, and leaves Jasmin with the misconception. Will Khushbeer stop Tejo from leaving the house? Will Tejo get ousted from the house? Will Jasmin win in her evil plan again? Comment your views and keep reading.

Gurpreet accepts Fateh’s appeal. She meets Tejo’s family and requests them to bring back Tejo to their house, so that Fateh and Tejo can move on in their lives. She knows Jasmin is wrong, but is helpless, because she doesn’t want to lose her son. Satti and Rupy are worried for Tejo. Rupy doesn’t want Tejo to make any sacrifice, but fight for her rights. He decides to not bring back Tejo, and support her in the battle. Fateh is still disturbed about Khushbeer’s defamation. He realizes that Jasmin is least concerned for his family. He still supports her.

Khushbeer gets insulted in the political party office and loses his election ticket because of Fateh’s affair news. The news spreads and brings defamation for the entire family. Fateh loses the honour he received, when the media calls him a shameful example. Gurpreet curses Jasmin for bringing shame for the family. Jasmin bluntly argues with her and proves how worthless she is. Gurpreet gets calmed down by Fateh. She learns about Khushbeer’s insult. Khushbeer arrives home and lectures Fateh over his mistakes.

He feels ashamed because of Fateh, who ruined everything in the family. Gurpreet asks Tejo to go to her parents’ house and stay with respect. She doesn’t want Tejo to stay hurt seeing Jasmin. Tejo asks Khushbeer to let her return to her home. Khushbeer understands Jasmin’s plans to send off Tejo from the house. He tells that he will not let Tejo leave the house, to make the evil plotting succeed. He wants Jasmin to leave from the house. Khushbeer defends Tejo, after regarding her a daughter. Tejo gets caring for the family, and also understands Gurpreet’s concern.

Tejo has connected with the family’s heart, while Jasmin is selfish and doesn’t even care for Fateh. Fateh observes Tejo’s goodness. He feels guilty to cheat her. Tejo stays in pain because of Jasmin. She knows Jasmin has wronged the family, but doesn’t expose her this time. Thankfully, Khushbeer is a sensible person to understand Jasmin’s foul ploy and defend Tejo. A big twist will come in the show with Jasmin facing a huge humiliation in the Virk house, when the NGO ladies blacken her face. Is this also Jasmin’s evil plotting? How far will Jasmin go to compel Fateh to marry her? Keep reading.

Reviewed Rating for Udaariyaan 25th September 2021 Written Update Tejo ousted: 3/5 This rating is solely based on the opinion of the writer. You may post your own take on the show in the comment section below.