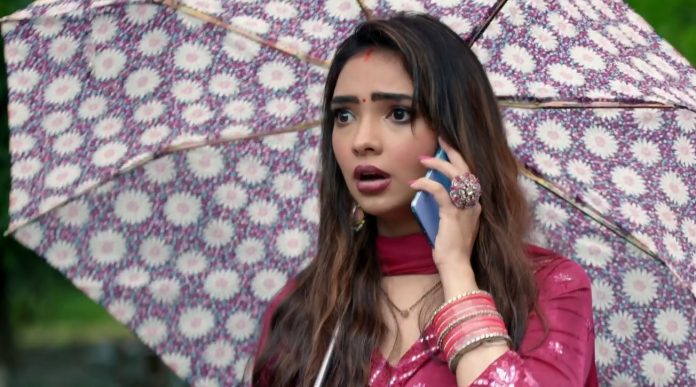 Kumkum Bhagya 28th September 2021 Written Update Rhea appalled Ranbir is upset that Prachi is sending him away with Rhea. He wanted to spend time with Prachi. He asks her why does she have a big heart to always think of others first. He also wants Prachi to become selfish for her love. Prachi tells him that Rhea needs his help, he should take Rhea to Siddharth. She trusts Ranbir that he will always love her, and lets him free. She asks him if he will give his heart to someone else. He tells her that till he is with her, he will not even see anyone. Prachi finds him cute and hugs him. Rhea watches their moment, and thinks soon Ranbir will be with her. She wants to cast a spell of her love on Ranbir and make him forget Prachi.

Rhea finds Abhi and Pragya together on the roads. She wants to know why is Abhi acting as Pragya’s servant. She calls up Aaliya to enquire. She wanted Aaliya to separate Abhi and Pragya. Abhi takes Pragya to the office by driving the car. He works as her driver, office peon and bodyguard. He is happy to work for his self-esteem. Aaliya tells Rhea that Pragya had pushed Abhi down the stairs in an attempt to kill her. Rhea can’t believe that Pragya wants to kill Abhi. She finds Pragya insulting Abhi publicly by making him work as her slave. Keep reading for a full update.

Ranbir and Prachi get into a cute moment, when she tells that she will kiss him in order to convince him. He asks her to stop him from going away. She asks him not to do a big drama. He tells that he can’t live without her. She asks him to see her picture if he misses her. He tells her that she is his pain-killer. Se asks him to think that he is in the office, he is occupied with work and can’t think of her.

He tells that he is a one-woman man, he will always be of her until he is with her, if he becomes of someone else, then he will be loyal to that person. Rhea wants to win Ranbir forever. She plans to win his love and separate him from Prachi. Prachi tells Ranbir that nobody can tolerate him, he is just of her. Ranbir asks her to hit him if she loves him. She tells that he will be hurt if she punches him to show how much she loves him. He wants her to express it. She doesn’t want to beat him.

Meanwhile, Abhi works for Pragya in the office. She reminds him that they have to behave like husband and wife. He tells that boss and employee can be husband and wife too. He reminds her the salary date. She knows that he is asking for salary to buy the alcohol. She tells him that she doesn’t have cash to pay him right now. She asks him to buy anything he wants, except the alcohol. She gives him the credit card. She tells that she has paid the money to the garage owner.

Abhi learns that she is troubling him by blocking his drinking. He tells that he has self-respect, he will find ways to earn money, its not a big thing for him. He challenges her to stop him from drinking if she can. Moreover, Rhea wants to look her best and remind Ranbir of their college days. She feels its her fault that she had sent Ranbir to befriend Prachi in the college. She goes for shopping. Pallavi tells that Ranbir refused to go, and then agreed on Prachi’s saying. She feels Prachi has much control on Ranbir. Pallavi tells that she likes Rhea, who should have become Ranbir’s wife.

Dida asks her not to blame Prachi all the time. Rhea spots Abhi in the market. She wants to meet him. She stops seeing Pragya with him. Abhi’s service to Pragya irks Rhea. Rhea wonders why did Abhi come to meet her. She knows that Pragya doesn’t love her. She feels everyone is her enemy. She wants to snatch Ranbir from Prachi. She calls up Aaliya to share her feelings. She tells that she just saw Abhi working for Pragya.

Aaliya instigates Rhea against Pragya. She tells that Abhi is Pragya’s driver and bodyguard, Pragya has hired him as her servant. She reveals that the entire family came to stay in Pragya’s house for Abhi’s safety, because Pragya wants to kill him. Rhea believes Aaliya. She asks Aaliya to keep Abhi safe.

Reviewed Rating for Kumkum Bhagya 28th September 2021 Written Update Rhea appalled: 3/5 This rating is solely based on the opinion of the writer. You may post your own take on the show in the comment section below.