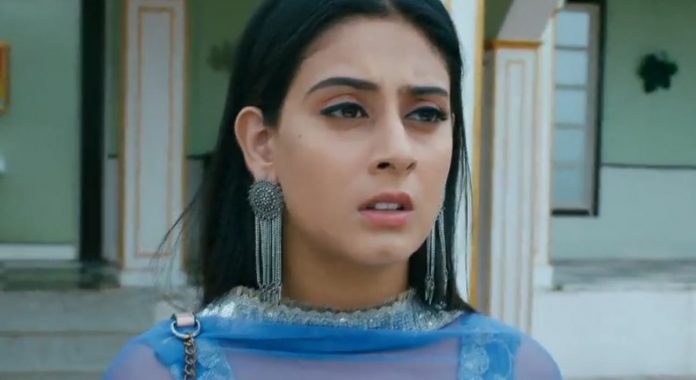 Udaariyaan 27th September 2021 Written Update Shocking The shocking twist comes in the show with Jasmin’s mega humiliation seen. Its totally unexpected to watch Jasmin getting insulted by a bunch of ladies from the NGO, protesting against her on the roads, while Tejo returns home from the college. After the insult faced by Fateh and Khushbeer, its Jasmin’s turn now. Sweety asks Jasmin to stay inside the house, because the people are already angry at her and may pass taunts. Jasmin doesn’t listen to Sweety’s advice. Jasmin goes out of the house with Sweety. She gets a shocker seeing the angry crowd.

Tejo gets to see the ladies catching Jasmin and applying the black colour to her face to punish her for her immoral act. The ladies scold her for having an affair with her sister’s husband. Tejo’s word gets proved, when Jasmin realizes that she is just an other woman in Fateh’s life. Tejo had least expected this to happen. Jasmin tries to get rid of the ladies, who angrily surround her and blacken her face. They tell Jasmin that her face should be blackened, like her dirty deeds.

They want Jasmin to know the kind of punishment she deserves for bringing a bad example forward. Jasmin is left in shock after the terrible incident. Tejo rushes to save her sister from the ladies. It can be expected that Jasmin had called the ladies herself to have the humiliation drama, just to compel Fateh to marry her, and make Tejo out of the house. Jasmin will try all fair and unfair means to expel Tejo from Fateh and her lives. Will there be an end to Jasmin’s dirty plans? When will her plans get known to Fateh? Keep reading.

Tejo comes to Jasmin’s rescue when she sees Jasmin’s face blackened by the ladies. She didn’t wish her sister to go through such pain. She tells the ladies that they have no right to interfere in anyone’s personal matter. She protects Jasmin as she had been protecting her since childhood. The elder sister in Tejo doesn’t die even when Jasmin has wronged her a lot. Tejo makes the ladies away. She doesn’t want anyone to punish Jasmin, since they aren’t any police or law force to do so. Tejo lectures them and makes them realize that such treatment with a woman is inhumane. She can’t see Jasmin like that and cries realizing her emotional low. Jasmin can’t face anyone after this.

Tejo’s loud screams reach the Virk family, who want to know what’s happening outside. Sweety informs the family about Jasmin facing a big problem. The family gets worried. Tejo tells the ladies that she isn’t any a weak person to get her family matters in the public to gain sympathy and support. Tejo doesn’t want anyone’s support to get her rights. She asks the ladies to leave the matter to herself and not come back. Jasmin breaks down. The Virk family is also upset to see Jasmin’s state.

Jasmin seems broken down, but doesn’t leave a chance to accuse Tejo for her state. Fateh learns the entire chapter and rushes home to meet Jasmin. He consoles her and patiently hears her out, when she blames Tejo to be responsible for the entire mess in their lives. She tells him that he loves her, but still kept Tejo as his wife, if Tejo wasn’t there to snatch her rights, then this day would have not come in their lives. She tells him that Tejo is the root of all the problems, she should leave the house. Fateh understands her pain. She refuses to stay in the house if Tejo stays back.

Fateh supports Jasmin, thinking the limits got crossed this time. He takes her to the family to demand Tejo’s leaving. He asks the family if Jasmin should die. Fateh gets into a heated argument with Khushbeer, who defends Tejo like always. Fateh threatens to leave the house if Khushbeer doesn’t ask Tejo to leave. Khushbeer doesn’t think its Tejo’s mistake. He tells that Jasmin is herself responsible for her sorrow. He doesn’t want Fateh and Jasmin to accuse Tejo, who has been always wishing just good for everyone. Fateh wants his rights on the house, but Khushbeer refuses to move.

He asks Fateh and Jasmin to live shamelessly in the house or just leave if they can handle themselves. Fateh loses his cool and decides to leave the house. He can’t see Jasmin’s further insult. Gurpreet cries for her son, while Khushbeer gets rigid. Tejo returns home with Biji. She learns that Fateh has left the house along with Jasmin. Biji asks them why did they let Fateh leave. Tejo wants to speak to Fateh.

Fateh and Jasmin check into a low-class lodge. Fateh finds Jasmin complaining a lot. He explains her that he can’t afford a better place. She asks him to get money from the academy or family. Fateh doesn’t want to ask the family for money. He tells that he has no rights on the academy earnings or family now. He asks her to give him a week, he will surely find a better place for them. Jasmin feels really terrible to stay in the lodge’s dirty room. Gurpreet begs Tejo to bring back Fateh. Khushbeer doesn’t listen to anyone.

He tells them that Fateh needs a lesson of life, which is possible only when he is away from the family. He wants Fateh to value the important relations in his life, than running after Jasmin. Gurpreet and Mahi are away to lose Fateh forever. Tejo is worried after Fateh’s sudden leaving.

Reviewed Rating for Udaariyaan 27th September 2021 Written Update Shocking: 3/5 This rating is solely based on the opinion of the writer. You may post your own take on the show in the comment section below.