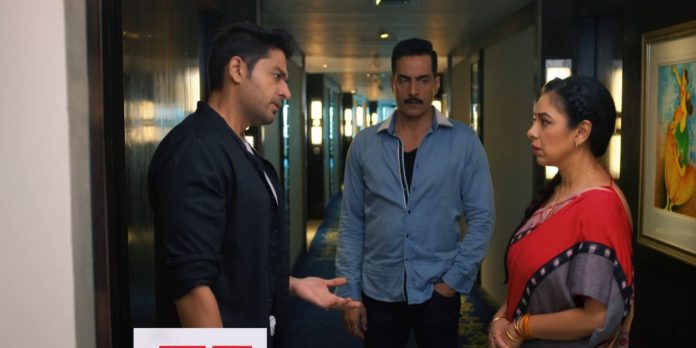 Anupama 1st October 2021 Written Update Vanraj’s dirty taunt Anuj confesses that he loves Anupama, he couldn’t forget her till date. Vanraj doesn’t understand his love for Anupama. Thankfully, they have the hearty conversation in the drunken state. Anuj feels he had tried hard, but his love for Anupama never got less. Vanraj looks inside his heart to know his feelings for Anupama. He feels he didn’t love Anupama after spending 25 years with her. He confesses that he had his children with Anupama, but never loved her. Anuj wonders the same, that Vanraj never loved her when she is so adorable and true.

Vanraj confesses that he still have a connection with Anupama. Vanraj doesn’t know why he has a problem with Anupama, when nobody else ever gets against her. Anupama doesn’t know what the drunk men are talking. She goes to check on her. Vanraj asks Anuj why didn’t he marry Anupama. Anuj tells that he had gathered courage and took one year to confess his feelings to Anupama, but till then she got married to him/Vanraj.

He adds that he lost to Vanraj. Anupama misses to hear Anuj’s big confession of love. Leela wants Anupama to answer her call. Rakhi angers her by telling that Anupama has gone out of the city, she won’t be the same Anupama when she returns. Leela gets instigated by Rakhi. She worries thinking of Anupama’s big change.

Anupama takes care of drunken Anuj, while Kavya takes Vanraj with her. Vanraj tells that he doesn’t remember anything that happened at night. Anupama feeds the curd to Anuj to lessen the hangover and puts him to rest. Next day, Anuj gives a clarification to Anupama. They both face dirty remarks from Vanraj. Vanraj tells them that their night would have become memorable if Kavya and he didn’t come to disturb them at the hotel. Vanraj’s taunts anger and upset Anupama and Anuj as well, since Anuj is in senses to understand what Vanraj means. Keep reading for a full update.

Anuj tells Vanraj that when he reached Anupama’s house, she was getting married. He further tells Vanraj, that Anupama’s baraat (marriage procession) came, Vanraj was being worshipped that time. Drunk Vanraj praises himself asking Anuj, was he looking hot in blue sherwani? In a drunken state, Anuj scolds Vanraj saying that his heart broke that day and the latter is thinking about his looks. Vanraj apologizes.

Vanraj tells Anuj that if he would have been in his place, he would have broken his face. Anuj asks Vanraj to break his face. Anuj wishes he would have married Anupama in his place. He also asks Vanraj, should he break his face now? They laugh again. Vanraj tells Anuj that he loves Kavya but they fight every day. He asks Anuj how he still loves Anupama, even after 26 years. Anuj tells Vanraj that he and Anupama are connected to each other through initial letters of their name.

He tells Vanraj that he cannot forget Anupama, as his name always reminds him of Anupama. Vanraj says to Anuj, that time always erases memories. Anuj says his heart is clever and it wrote Anupama’s name on it with a pen, which cannot be erased. He says he will not let anyone erase Anupama’s name. With Confidence Anuj says, he will always love Anupama till he is alive. Drunk Vanraj asks him to shut up, he feels scared. Anuj asks Vanraj not to stop him as he has been silent for 26 years. He got the courage to speak the truth seeing Vanraj and told him the first time. Vanraj tells Anuj to not confess his feelings for Anupama to him and asks him to stay silent.

Anuj refuses to remain silent. He again confesses his love for Anupama in front of Vanraj. When Anupama and Kavya return to Anuj and Vanraj, they again start their funny brotherhood ranting. Kavya and Anupama wonder what happened to Vanraj and Anuj after they got drunk. They again start their brotherhood ranting. Kavya asks Anupama to drop Anuj to his room and feed him curd. She tries to take Vanraj to their room but he refuses to leave Anuj. Even Anuj refuses to let Vanraj go with Kavya. Both Anuj and Vanraj hug each other and say, “I love you” to each other. Kavya and Anupama scold Anuj and Vanraj and ask them to go to their rooms.

On the other side, Kavya makes Vanraj lay on the bed. Both of them say, “I love You” to each other. Anupama tries making Anuj lay on his bed. Anuj starts his shayari, Anupama asks him to stop Shayari and talk straight-forwardly. Anuj asks her should he talk straight-forwardly? Anupama replies yes. Being a gentleman Anuj doesn’t let Anupama open his shoes. Anupama feeds him curd and again the old romantic song plays in the background. Anupama finally makes Anuj lay on his bed. Anuj asks Anupama to go to her room and gets asleep.

Next morning, Baa tries calling Anupama, Vanraj and Kavya. But don’t get into contact with anyone. She thinks Anupama has got wings and says how dare she doesn’t pick her calls. Anupama rings Anuj’s doorbell and he opens the door. He thinks of shayari in his mind and stares at her. Anupama asks him if he is okay now? He tells Anupama that his head is feeling heavy. Anupama asks him doesn’t he remembers anything from last night’s happenings. He asks what happened? Other hand, Baa gets angry thinking why Anupama is not answering her calls. Rakhi reaches there and puts fuel to baa’s anger, talking nonsense about Anuj and Anupama.

Vanraj in a taunting way apologizes to Anuj and Anupama, saying their Bombay trip got ruined because of him. He angers Anuj and Anupama saying that their night would have been memorable if Kavya and Vanraj wouldn’t have interrupted them. Anupama gives Vanraj a befitting reply and asks him to stay away from her workplace. Anuj gets shocked hearing Anupama’s reply which clears how Vanraj treated Anupama during their marriage years. Vanraj and Kavya feel insulted.

Rakhi will play with Baa’s necklace and break it. Shahs will feel bad. Anupama and Vanraj will return and get shocked seeing Rakhi’s behavior with Baa and Bapuji. She will warn Vanraj to not show attitude and return her money. Anupama will return Rakhi’s money through a cheque. She will tell Rakhi that now she will not be able to meet Kinjal ever. Vanraj will shut the door on Rakhi’s face, making her angry. Keep reading.

Reviewed Rating for Anupama 1st October 2021 Written Update Vanraj outbursts: 5/5 This rating is solely based on the opinion of the writer. You may post your own take on the show in the comment section below.