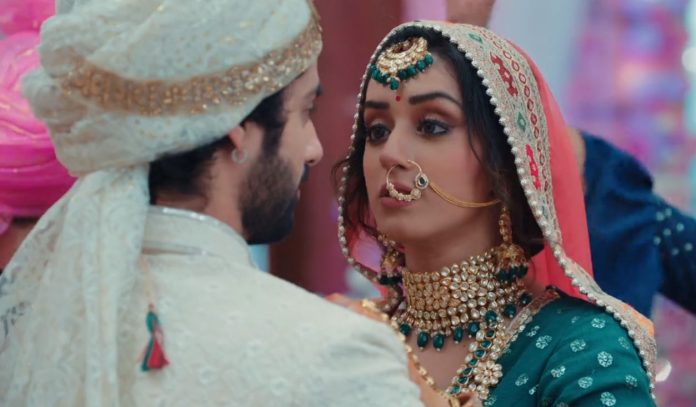 Yeh Hai Chahatein 1st October 2021 Written Update Wedding twist Prisha feels happy seeing the mangalsutra that Rudraksh made her wear. Someone knocks on her room door. She opens and a servant arrives to give her breakfast. Prisha asks him about Anvi’s whereabouts. He tells her that maybe Anvi is sleeping. She sends him back. Prisha thinks she has not met Anvi since yesterday. She also thinks about whatever bad things Digvijay and Sanya said to her. She thinks to ignore their words and meet Anvi. Prisha decides to meet Anvi and get her ready for her marriage. She reaches Anvi’s room and finds her missing.

Digvijay scolds her saying that now Sanya will take care of Anvi. Prisha asks Digvijay why he is trying to separate her from Anvi even after knowing that both of them are very much attached to each other. He tells her that she herself decided to go away from Anvi. She replies to him that she just made a decision to live her life and because of that she is not making Anvi away from herself. She tells Digvijay that they should not include kids in their adult matters. She says that Anvi loves her a lot and vice-versa.

Digvijay asks Prisha to not worry about Anvi as she is with her real mother Sanya. He tells her that Anvi has accepted Sanya and started loving her. He further tells her not to make Anvi recall or love her again. Digvijay also tells her that Anvi has gone to the parlor with Sanya to get ready for her marriage. Prisha says she was going to get Anvi ready. He makes Prisha feel bad saying that Sanya will take care of Anvi’s everything. He asks her to get ready and keep Anvi away from false relations and hopes.

Armaan doesn’t let Prisha meet Rudraksh and asks her to get ready, he will see Rudraksh. He thinks he cannot let Prisha meet Rudraksh. Vasudha, unaware of the situation, asks Prisha to concentrate on herself. Prisha thinks and gets tensed about Rudraksh and Anvi. Sanya leaves Anvi outside the car telling her that she is going to get ice-cream for her. Some people kidnap Anvi. Sanya returns and gets shocked on not finding Anvi. Armaan asks Sharada about Rudraksh. Sharda asks Armaan to wake Rudraksh as soon as possible. Both of them try to wake up Rudraksh. Sharda worries about Prisha and Rudraksh’s marriage.

Armaan asks Sharda to bring Rudraksh on time as mahurat is very short. He leaves thinking that Rudraksh will not be able to reach for marriage on time and it will get cancelled. On the other side, Sanya reaches the goons who kidnapped Anvi. She gives them money and asks to not let Anvi reach Prisha and Rudraksh’s marriage. Prisha feels her happiness of getting her family back with Vasudha. GPS and Vasudha wait for Rudraksh. Armaan thinks Prsiha will get angry at Rudraksh and cancel the marriage. Sharada informs Vasudha that they are in some trouble. Everyone asks Sharda about Rudraksh’s whereabouts. Prisha too worries about Rudraksh.

Prisha asks about Rudraksh from everyone. Armaan tries manipulating Prisha by telling her that Rudraksh is drunk and doesn’t care about their marriage. She asks Armaan why he didn’t inform her earlier. Digvijay and Armaan again and again try to manipulate Prisha about Rudraksh. They ask her to break her marriage with Rudraksh. Prisha, GPS, Vasudha and Sharda feel happy on Rudraksh’s arrival, while Digvijay and Armaan get shocked. Prisha and Rudraksh hug each other. Rudraksh makes Armaan eat sweets, telling him that he knew about his plan. He tells Armaan that he just acted drunk.

He too recalls how Sharda helped him in fooling Armaan. He also told Sharda about Armaan’s real intentions. Armaan acts innocent in front of Rudraksh. Rudraksh warns him to not try stopping his marriage. Prisha and Rudraksh get in a romantic mood. Everyone teases them. Armaan feels angry. Rudraksh gets happy seeing his best friend and star Sunny Kaushal. Sunny promotes his and Radhika Madan’s upcoming film “Shiddat”. He briefly describes his film and leaves congratulating Rudraksh and Prisha for their married life.

Rudraksh and Prisha sit in mandap. Digvijay discussed their plan B. In the next episode, Saaransh will be seen performing Prisha and Rudraksh’s Gathbandhan. Sanya will reach there crying and inform everyone about Anvi being missing. Armaan and Sanya will fake concern for Anvi. Prsiha will get up and tell Rudraksh that she cannot marry him till she finds Anvi. Vasudha will say that they don’t have a marriage mahurat till next six months. Rudraksh agrees with Prisha’s decision and removes his Pagdi, marking that the marriage will stop. Keep reading.

Reviewed Rating for Yeh Hai Chahatein 1st October 2021 Written Update Wedding twist: 5/5 This rating is solely based on the opinion of the writer. You may post your own take on the show in the comment section below.