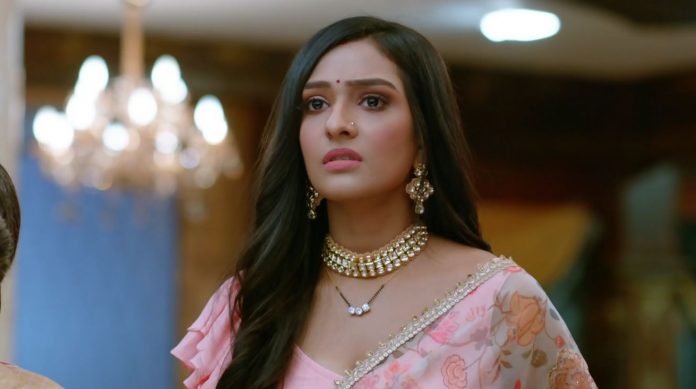 Bhagya Lakshmi Rishi behind bars 30th September 2021 Episode Preview The Police Inspector doesn’t believe Rishi and arrests him. Rishi is not ready to go to the police station, as he is innocent and hasn’t done anything wrong. The Inspector handcuffs him and drags him out of his office. Ayush tries to convince the Inspector that Rishi is innocent and the girl is framing him, but Inspector threatens to arrest him for hindering their duty. Media come in Rishi’s office and start clicking pictures. Rishi hides his face. Ayush orders the security guards to throw them out but they cannot control them. The media requests Inspector to let them talk to Rishi. The Inspector grants them 2 minutes to speak with Rishi.

Reporters ask Rishi about the molestation charges on him filed by the girl Shanaya Thakur and asks him very demeaning questions. Rishi tries to save himself from their questions. The Media hypes the news for their Channel TRPs. Inspector arrests Rishi. Rishi asks Ayush to only inform his dad and not anybody else in the house. Reporters make Rishi’s arrest trending and the news gets flashed on every news channel and gets viral too. The Media heads to the police station to cover more spicy news, believing Rishi’s business and life will be badly affected. Virendra comes into the kitchen and appreciates Lakshmi’s cooking skills. He calls Lakshmi the goddess of food and asked her to make food for him daily. He plans to have early dinner due to Lakshmi and gets excited knowing Lakshmi has prepared Shahi Paneer, Dal Makhni, and jaggery for dinner.

While Virendra is talking to Lakshmi, he receives Ayush’s call.
Ayush informs him to arrange a lawyer and come to the police station as Rishi has been arrested on molestation charges. Virendra is shocked but doesn’t tell Lakshmi about it. He instructs Sanjay to bring a TV remote and car keys and leaves to bail Rishi out. Outside the police station, the reporters gossip about the possibility of Oberoi’s business going through a huge loss after this news becomes the talk of the town.

Rishi arrives in a police van. The Reporters run after him to ask him more questions. Rishi feels disgusted hearing their humiliating questions and is about to slap them but a lady reporter comes in between and he stops himself. Inside the police station, Shanaya plays the victim card and looks like a victim with her makeup. Rishi explains to the Inspector what had happened in his office, but the police Inspector doesn’t trust him and threatens to get him punished for understanding Shanaya’s pain, being a father of a daughter himself. Ayush tries to convince the Inspector that Rishi is innocent.

The Inspector orders the Constable to lock him in the lock-up. Shanaya cooks up the story in front of the Inspector and thanks him for his support. She cries to gain everyone’s sympathy. The Oberoi family begins their dinner made by Lakshmi when Karishma receives the breaking news of Rishi’s arrest on her phone. One by one all the family members start receiving the news.

Neelam switches on the TV after getting an extra remote from Sanjay and everyone watches Rishi’s arrest news as the breaking news. Lakshmi is shocked and doesn’t believe it is true, as she knows Rishi. Neelam and Karishma leave for the police station. Malishka also receives news about Rishi and calls a lawyer. The Reporters trouble Virendra with questions but he ignores them and goes inside. Virendra sees Ayush and Rishi in the lock-up. Rishi tries to clarify that he is innocent and has not done anything wrong.

Virendra believes him and calls him his pride. He refuses to hear the clarification, knowing his son very well. Neelam reaches the police station and Reporters flood her with questions. She takes a stand for Rishi and talks about the good values which Rishi has. She threatens to sue the channels if they write anything or show anything against Rishi unless he is proven guilty.

Dadi gets shattered after listening to the news continuously. Lakshmi asks Ahana to switch off the TV, as the news is fake and they shall not get saddened hearing it again and again. Rishi asks Neelam why did she had come to the Police station. Neelam says she had to come for her son. Virendra’s lawyer informs him that he could not get bail as he couldn’t reach the court on time and the judge had gone. Neelam says that she cannot let her son stay in the lockup for the whole night and asks Inspector to release Rishi and Ayush, as her son has not done anything wrong. At home, Lakshmi is assured that Rishi respects women and he has been falsely accused. She prays in front of God to save Rishi from all evil eyes and negative atmosphere.

While Neelam tries her best to prove her son’s innocence. Inspector says your son is guilty. Shanaya comes to the inspector and says that she has given her statement and photos and now she would like to go home. A lady constable offers to drop her. Neelam stops Shanaya and asks her why she is trying to defame her son Rishi and accused him of false allegations. Shanaya’s eyes have gone red with tears and she is not able to control her emotions.

She tells Neelam that Rishi has indeed molested her and being a girl, she will not ruin her dignity. She also questions Neelam about her presence in Rishi’s cabin at that time and narrates the cooked-up sequence once again in front of her. Shanaya attacks the sensitive area about being a woman who was asked favors in return for a job at the workplace. With such a huge accusation on him, how will Rishi clear his name? Will truth win against evil? Keep reading.

Reviewed Rating for Bhagya Lakshmi Rishi behind bars 30th September 2021 Episode Preview: 5/5 This rating is solely based on the opinion of the writer. You may post your own take on the show in the comment section below.