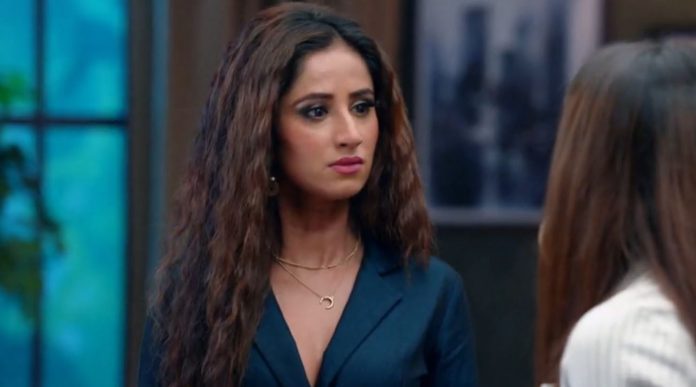 Bhagya Lakshmi 1st October 2021 Written Update Malishka to rescue Rishi tells Neelam that Shanaya is lying and he has not even touched her. Rishi tells his mother to not believe Shanaya. Shanaya says that when she refused to give in to his demands Rishi caught her hand and threw her out of his cabin. Neelam shouts at Shanya and tells her that she is lying and threatens to punish her. The police inspector stops Neelam from scaring Shanaya. Neelam and the inspector argue but he tells them it’s not their hotel but his police station. The inspector tells Shanaya to head home. Malishka and Shanaya dash each other at the police station.

Malishka asks the Inspector how he can put a renowned personality like Rishi Oberoi in jail and demands to free him. Inspector doesn’t wish to listen to her lecture and demands bail to free Rishi. Malishka reveals that she has brought Rishi’s bail papers and handovers them to the inspector. Rishi and Aayush are left free. Rishi goes to hug his mother but Malishka goes running and hugs him. Rishi hugs Neelam, Karishma, and Virendra. Rishi signs the bail papers and Neelam thanks Malishka for her timely help.

Karishma suggests going home by backroad as on main road reporters will be present and they may stop them and ask controversial questions. Neelam agrees. Karishma asks Rishi to go home by the backside road. Rishi says that he has not done anything wrong and is innocent. When he hasn’t committed any crime he will not fear anyone. Karishma asks Malishka to accompany her in the car as she wants to speak something important. Rishi and his family get haunted by reporters outside the police station. Rishi shouts at them and says that they have all hurt him with defamatory words.

He tells that he adjusted his timings and always came for the interviews whenever they called but now he will not say anything regarding this case and they all know the reason why. Karishma informs Neelam that she and Malishka will come in her car. A media reporter notices Malishka Singh Bedi and says that she was rumored to be Rishi’s girlfriend. Malishka is enraged and wishes to smack Shanaya for accusing Rishi of such a cheap crime. Karishma asks her to cool down. Malishka says that Rishi needs her and scolds the driver to drive fast. Karishma says that they are not going to Oberoi Mansion but to Andheri west where Shanaya stays to convince her to take back her complaint.

Karishma gives an idea to Malishka about becoming the heroine of the whole scenario and getting a special place in Rishi’s life and leaving behind Lakshmi. Malishka agrees to ace the situation and says she knows exactly how to handle such kinds of girls. Shanaya speaks to a guy named Rohan and tells him that Rishi has not done anything wrong with her but humiliated her in front of his office staff and now he and his family have to pay the price by getting humiliated in front of the whole world.

Rohan tells Shanaya to calm down but she is determined to tarnish the image of Oberois in the public’s mind. Rohan tells her that Oberois are a big name and it is not easy to spoil their reputation. Shanya tells him that she has police security and Rishi is in big trouble. Shanaya asks Rohan to come back soon to him and cuts the call. Shanaya is shocked to see Karishma and Malishka at her house and doesn’t allow them in. Malishka says that she needs to speak and goes in forcibly.

Lakshmi is praying to god when Rishi comes back and she goes to meet him. Rishi ignores her and goes to meet his Dadi. Dadi says that she was confident about Neelam and Virendra rescuing Rishi. Neelam says that they have not done anything and it was Malishka who came on time and did bail for Aayush and Rishi. Virendra says that their lawyer could not get bail as his car got broken down. Neelam appreciates Malishka’s swift actions in saving Rishi.

Virendra says to his mother that Malishka should be given credit for Rishi’s freedom. Rishi doesn’t speak anything and his family members are worried about his well-being. Malishka gives the same job offer of a managerial post to Shanaya but she rejects it. Malishka gets angry and declares that Rishi’s whole office is filled with CCTV cameras now she will not get any job but will land up in jail.

Shanaya informs Rohan that Rishi’s family friend came to threaten her but she is not scared as the CCTV camera of Rishi’s cabin is not working. Shanaya is not scared of lying as she got confirmation about the CCTV camera not working before entering Rishi’s cabin. Shanaya has gone mad with anger and pledges to ruin Rishi’s married life and happiness. Rishi is very disturbed and feels that Lakshmi will not believe him.

Lakshmi on the other hand has full faith in Rishi and believes that he has been a victim of a false accusation. Lakshmi thinks of a way to calm Rishi. Malishka gets to know from the security officer that Rishi’s CCTV camera in the cabin is not working. Karishma says that Shanaya is very confident and clever and must have figured out that the CCTV camera was not working. They both decide to tackle Shanaya consciously.

Rishi takes 2 medicines due to a headache and goes to drink alcohol but remembers Lakshmi’s words and stops himself. Rishi is tensed that tomorrow morning his molestation case will be on the front page and all their reputation will be ruined. Virendra assures Rishi that nothing is more important than him and they all are by his side always. Rishi is worried about the society’s system where girls do not have to prove anything but a boy needs to prove his innocence.

Virendra suggests Rishi have sleeping pills and have a sound sleep. Lakshmi comes and Virendra asks her to get sleeping pills from Neelam’s room as it is prescribed by doctors when Rishi is stressed he is given it. Lakshmi thanks Malishka for her help but she replies that she can do anything for Rishi. Lakshmi is shocked. How will Rishi handle this situation? Will Malishka leave Lakshmi behind and create a special place in Rishi’s life? Keep reading.

Reviewed Rating for Bhagya Lakshmi 1st October 2021 Written Update Malishka to rescue: 5/5 This rating is solely based on the opinion of the writer. You may post your own take on the show in the comment section below.