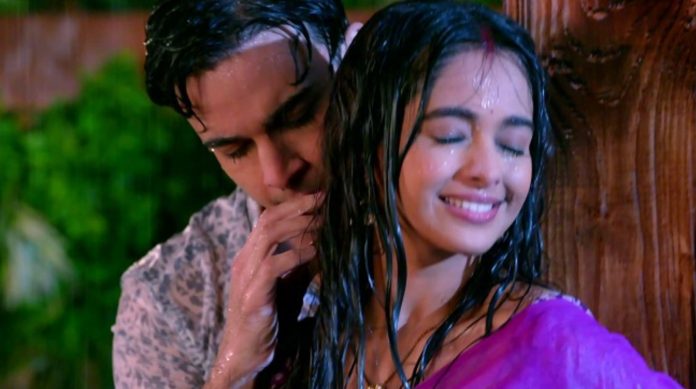 Kumkum Bhagya 2nd October 2021 Written Update Awesome Rhea asks Aaliya to always support her. Aaliya asks her to take care. Rhea wants to hurt Prachi and Pragya. Aaliya laughs that she will ruin Pragya by her own daughter. She wants to see Prachi crying. Pragya asks Abhi to drive slow, because he is drunk. He tells that he isn’t drunk, he didn’t drink after she left, Baljeet came and emotionally blackmailed him. The car breaks down. She asks him how did it break down. He asks the car to answer Pragya madam how did it break down. He checks the car engine. She tells that she got the car servicing done recently. He checks the fuel tank. He tells that the car ran out of fuel.

She asks him why didn’t he check, if he is the driver. He tells that he had to come to find her at night, without checking the fuel. He asks her if she has seen the time before going out. She tells that there maybe danger for a girl who goes out at night, he should have stopped her by leaving the drinks. He asks her not to risk herself. He tells that she won today, but she can land herself in a big trouble. He admits that he cares for her. Pragya gets glad to know that he still loves her. He goes to take help. He arranges the fuel. She feels her love has won, her belief has also won that Abhi has come to her rescue.

Abhi takes her home. On the other hand, Prachi asks Rhea why is she behaving strange. Rhea complains about Siddharth. Prachi tells that she doesn’t know how the matter started, but the one they love, their words don’t hurt their heart. She praises Siddharth, who can never fight anyone. She asks Rhea to start afresh. Rhea tells that Ranbir is sorted. Prachi tells that Ranbir is kiddish and troubling, he wants her to confess love to him in front of the family. She asks Rhea to help her. Rhea gets jealous. Prachi adds that she will be embarrassed by Ranbir’s condition. Rhea asks her to tell Ranbir not to have such wishes. Prachi asks her to help. She tells that Rhea is really smart and can find a solution.

Tanu and Aaliya don’t find Abhi in the room. They wonder where did he go at night. They get Abhi’s alcohol bottle. They want to find out how he left the alcohol. Mitali tells that Abhi went to get Pragya, they are back now. Pragya meets them and asks them to leave from her room. Pragya asks Tanu to leave from her room. She insults Tanu reminding how Tanu had stolen her purse and went to the jail. She shows them where they belong and kicks them out of the room. Pragya enjoys troubling them. Prachi asks Ranbir to have his favorite food. Ranbir doesn’t talk to her. He gives her a note.

Pallavi asks Rhea if Siddharth had called. Rhea tells that Siddharth asked about the family. Prachi reads Ranbir’s note. He insists her to confess love to him. She refuses. Prachi and Ranbir exchange the notes under the table. Rhea gets the note and passes it to Prachi. He shows Ranbir that she is helping him. Ranbir wants Prachi to say that she loves him. Dida gets happy to enjoy the rains. Pallavi asks her not to go, she will fall sick. Ranbir tells that he will call Dida. Prachi asks Pallavi to go and call Dida, she won’t listen to Ranbir. Prachi tells Rhea that she will confess love to Ranbir in front of everyone.

Dida dances in the rain. Ranbir asks her not to stand under the rain, else she may fall sick. Dida tells that she loves rains. She doesn’t listen to him. She enjoys the rains. Ranbir and Prachi also enjoy the rain. Prachi tells Ranbir that everyone is around, she wants to tell him that she loves him. Ranbir asks Prachi to say it aloud. Rhea finds them romancing, and gets unhappy. Prachi fulfills Ranbir’s wish by confessing love to him. Ranbir romances Prachi in the rains. Rhea grows raged seeing their romance. Keep reading.

Reviewed Rating for Kumkum Bhagya 2nd October 2021 Written Update Awesome: 5/5 This rating is solely based on the opinion of the writer. You may post your own take on the show in the comment section below.