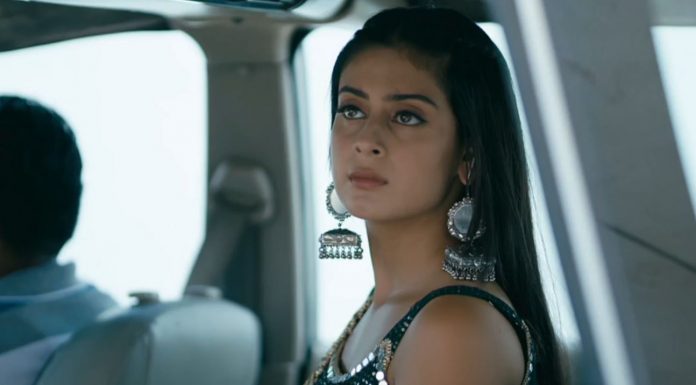 Udaariyaan 2nd October 2021 Written Update Jasmin’s new evil The family does their best to bring a smile on Tejo’s face, but she gets emotional seeing their love and cries. Jasmin tells Fateh that she will prepare his favorite dish. Fateh realizes that he got away from the family, even when he is staying in the same house. Tejo tells that she is going to give online tuitions to the students before exams. Jasmin finds the entire family praising Tejo and blessing her. Khushbeer feels Fateh insulted him, while Tejo kept his respect. Jasmin hates Khushbeer.

She wants to plan something to defame Tejo and get her thrown out of the house. Tejo is hurt that she still has to keep the loveless marriage. She knows that Fateh won’t be happy with the six months period given to them, which has snatched his freedom. She wishes she could help Fateh. Fateh also praises Tejo who has worked really hard to make a place in his house. When Fateh and his entire family sings Tejo’s praise, Jasmin gets enraged with jealousy and insecurity. Jasmin wants Tejo to leave Virk house and go back to their parents’ house. She can’t tolerate Tejo further.

Even Tejo finds hard to tolerate Jasmin in the house, but keeps quiet because of Fateh. The court has asked them to give a second chance to their marriage. This makes Jasmin worried that Fateh may go close to Tejo again, if they start living under the same roof. Jasmin doesn’t want to take a chance.

Jasmin plans to make Tejo win hatred of the family, than love. Jasmin makes a new evil plan against Tejo to malign her name, so that Tejo’s insult brings a disgrace for the family, and they get helpless to throw her out. Jasmin aims that Khushbeer ousts Tejo from the house.

Jasmin sneaks into Tejo’s room and gets her laptop. She gets an idea on her mind. She thinks if her plan works, then everyone will hate Tejo, and never believe her truth. She wants Tejo to lose her stand. Tejo enters the room and sees Jasmin. Jasmin gets terrified seeing her. She makes excuses to leave. What has Jasmin done this time? Keep reading.

Tejo collides with him. He tells that he doesn’t want to lose their friendship. She asks him to check mail if he doesn’t get the file, all the details are already on his mail. She cares for his work, while Jasmin doesn’t care. He asks Jasmin to accompany him to the academy and help him in the work. Jasmin tells that she is too tired, she doesn’t want to come. She lies that she wants to help Gurpreet in the house and impress her. He asks her to win hearts, not just impress them.

She tells that they should go out and chill, because Tejo isn’t around to poke her nose in between. He tells that he has an important meeting. She doesn’t listen to him. Khushbeer finds her coming between his work. He asks Fateh to focus on his academy. He adds that he doesn’t believe Fateh’s talents now, since Fateh removed Tejo from the academy. He declares that Fateh won’t get anything from the academy after the divorce. Jasmin wants Khushbeer to be ashamed of Tejo. Tejo teaches the students and encourages them to study hard for the exam. She calls up Simran and tells that she is coming to meet her.

Simran doesn’t want Khushbeer to know about their meeting and get angry. Tejo tells that she is ready to get scolding from Khushbeer. Simran asks her to come soon. Tejo wishes she succeeds in her aim. Jasmin calls Sweety to meet her. Sweety tells that she wants to get help about the exam question paper from Tejo. Jasmin tells that Tejo will not reveal anything about the papers to anyone. She gets an amazing idea of leaking the exam papers to defame Tejo. She tells that everyone will hate Tejo a lot. Tejo brings Candy home.

She introduces Candy as her colleague’s son. She tells that she got Candy home to help her friend, who is busy on weekdays. Candy makes everyone laugh. They all like Candy. Jasmin wonders who did Tejo get home. Khushbeer permits Candy to call him Nana ji. He doesn’t think he will have any grandchildren. He feels connected with Candy. Candy’s cute antics makes the family laugh. Jasmin finds Tejo’s laptop. She goes to get the question papers from Tejo’s laptop. Tejo tells Fateh that Candy’s mum got a new assignment, he will come with her for few hours every day. Fateh remembers meeting Candy.

Jasmin gets the question papers. Tejo finds the family too happy. She asks Mahi to take care of Candy until she finishes her work. She informs Simran that Candy is bonding well with the family. Simran doesn’t want Khushbeer to get angry on Tejo. Jasmin wants Khushbeer to cut Tejo’s wings and stop her from flying. She copies the files before Tejo reaches the room. Keep reading.

Reviewed Rating for Udaariyaan 2nd October 2021 Written Update Jasmin’s new evil: 2/5 This rating is solely based on the opinion of the writer. You may post your own take on the show in the comment section below.