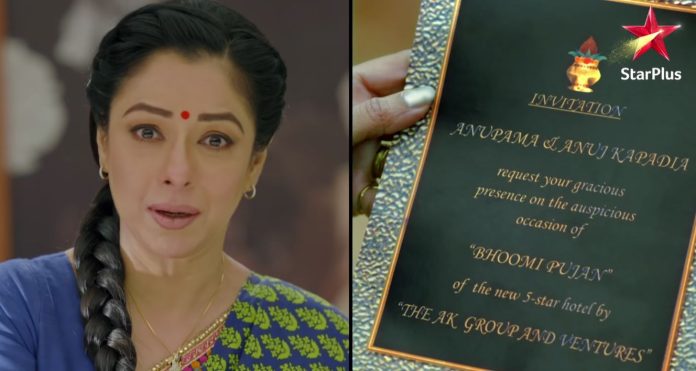 Anupama 3rd October 2021 Written Update Special Episode Anuj’s name brings a storm in Anupama’s life. Vanraj feels enough of hearing about Anuj and Anupama. Rakhi wants to return soon and take revenge on Anupama. Rakhi’s departs from their lives, but the problems don’t. Vanraj tells Leela that Anupama didn’t tell him about the cheque. He adds that Anupama will work really hard from now, because she is already indebted to Anuj. He passes taunts on Anupama, which gets never-ending. Vanraj asks Anupama how did Anuj give her a hefty amount just like that. He asks if Anupama will put her heart into her work.

On the other hand, Anuj curses himself for getting late in professing his feelings to Anupama, because of which she landed in such a bad house. He tells GK that its all his fault. He tells that if he had confessed his feelings to Anupama, then her life would have been a fairy tale, because she deserves it, she is a queen. He calls Anupama to meet him at his home. Anupama leaves from her academy. She gets spotted by Vanraj. Anupama meets Anuj, who gives her the hotel’s naming card to her.

Anupama is surprised to see the Bhoomi pujan card of the new five star hotel by Anuj Kapadia’s group. She sees the invite on her name and gets too emotional. She tells that her name is printed on the big project’s card. She adds that if a woman has courage and talents, then a woman can achieve anything. She sheds tears of happiness. Hasmukh congratulates Anupama, while Vanraj raises a question on Anuj and Anupama’s relation again. Anupama gets enraged. She doesn’t like whatever Vanraj has done to ruin her big day. She gets fed up of Vanraj, who always pushes her into big dilemma. She doesn’t want to tolerate anyone’s anger and insult. She decides to take a stand for herself.

Anupama assures that she will string the pearls back for Leela. Leela gets angered that Anuj has helped Anupama with the big amount. Anupama tells that its not a favor, but a loan from the company. Anupama explains that Anuj has given the cheque as a loan, she will work for the company and get the amount paid from her salary. Anuj had asked her to go home and save her money. Anupama tells Leela that she will work hard and pay the money. Vanraj asks her why didn’t she tell him about the cheque. Anupama tells that she was silent so that he stays silent, she didn’t want any drama on the way.

Vanraj tells that she will have to work for two years with Anuj to repay the loan. Anupama tells that it was important to take the loan. Vanraj laughs on Anupama. His dirty words doesn’t demotivate Anupama. She asks him why did he become like Saas to taunt her after the divorce. She wants to just do her work, irrespective of his taunts. Vanraj tells how Anupama has gone to the beach with Anuj. Samar tells Leela about a video of Anuj and his friend’s dance. Vanraj doesn’t remember about his dance. He makes fun of Anuj and his disgusting friend. Samar shows Vanraj and Anuj’s dance video to the family. The family asks Vanraj if he is drunk in the video.

Vanraj gets speechless. Anuj returns home by cancelling his meeting. GK asks him the reason why did he come so early. Anuj is in a terrible mood. He tells that its tough to deal with an ex, Vanraj crosses limit always and insults Anupama by his taunts. He feels helpless. He wants to punch Vanraj’s face. He tells GK that its his mistake that he didn’t marry Anupama. He tells that Anupama is a strong woman, but she has much tears filled in her life, she cries every day, because Vanraj never loved her.

He further states that she is a queen, she could have got a good life, but he is responsible for all the mess, she didn’t get a good life because of him. GK understands his emotions. Leela still wants to talk to Vanraj about Anupama and Anuj. She tells that Anupama’s heart can change for Anuj, who is helping her again and again. She doesn’t want Anupama to do any such mistake. Vanraj asks her to tell Anupama to limit herself. He is fed up that Anupama is moving on, but he is stuck at the same point. He wants to go to the cafe. Anupama wants to work hard and not let anyone make stories.

Kinjal apologizes to Anupama, who tells that Kinjal isn’t at fault if Rakhi misbehaves. Anupama tells her that she left the meeting, Anuj would have attended it. She is thankful that Anuj helped in time. Kinjal tells that things aren’t fine. She shows the Nandini and Rohan’s pictures, sent by Rohan with a motive to ruin Samar and Nandini’s lives. Samar gets caught by the goons, while Rohan shocks Nandini. Samar asks Rohan to leave Nandini. Kinjal tells that she didn’t tell anyone in the family about Rohan. She adds that Rohan has gone mad, he can hurt Samar in his madness. Anupama wants to carefully take the next step.

Anuj recalls Vanraj’s upsetting stares and vile words on Anupama. He feels Vanraj’s thinking is disgusting. He realizes that every person has problems in life. He just wants her to keep smiling. GK gives him a suggestion. Anupama reaches the academy. She finds Samar and Nandini there. Samar covers up about the fight. She asks him why is Rohan after them. Samar recalls the way Nandini pleaded to Rohan for his life. Rohan wants Samar and Nandini to break up. Samar lies to Anupama to keep her away from stress. Anupama tells that she has burnt the pictures. She plans Samar and Nandini’s engagement.

She tells that they will trick Rohan and fail him in his attempt to break their relation. She encourages them. Samar tells Nandini that they will ignore Rohan and handle him carefully. He adds that they shouldn’t get scared, else Rohan will use their fear. Hasmukh hands over the pearls necklace to Leela. She tells that nothing remains the same after a thing breaks and rejoins. He gets GK’s call. He informs Anupama about it. He summons her urgently. Vanraj finds her leaving from the academy. He wonders if she has gone to meet Anuj. He asks Samar to find out where did Anupama go. Samar tells that he will not find out.

Vanraj lies that he has some work with her. Samar understands that Vanraj wants to know if Anupama has gone to meet Anuj. Vanraj asks him to shut up. Anupama reaches Anuj’s house. She asks him if GK is okay, because Hasmukh told her that GK isn’t fine. She finds Hasmukh and GK playing chess. Hasmukh tells that its a surprise for her. Anupama scolds them for the lie, leaving Anuj to smile. They surprise Anupama with the Bhoomi pujan day invite. Anupama recalls Vanraj showing Pakhi’s birthday card to her, with no mention of her anywhere on it. Anupama emotionally cries seeing her name on the card. She shares her happiness with Hasmukh.

Anuj finds her too happy and dancing. GK tells that its her right. Anupama tells that she never got her right before. She pays gratitude towards Anuj. Anuj tells that its not a big deal. She tells that its a big deal, she knows it well. She wants to make her identity. She tells that she will start the work from tomorrow. Hasmukh asks her to write her name on the sky soon by her hard work. Anupama wants to go home and tell the good news to the family. GK asks her to make sweets for them, and feed all of them, then go home. Hasmukh agrees with GK. Anupama agrees to make sweets. Anuj tells that he will help her in preparing the sweets. Vanraj tells Leela that Kavya will come back soon. He asks about Anupama.

Leela tells that she didn’t come yet. They think she has gone to meet Anuj. Anuj takes Anupama to his kitchen. He tells that he didn’t come home to give the card because of Vanraj, he doesn’t want any problem for her. She assures that she will handle Vanraj. He asks her to invite her family for the Bhoomi pujan. She tells that she will make sweets, then go home soon to prepare dinner for the family. Anuj gets a happy moment in his life when he watches Anupama cooking. Vanraj grows restless when it gets late.

Anuj’s heart starts demanding more. He wishes Anupama and he bond well like a couple in love. He imagines their sweet romance on a filmi song. He likes the spices fragrance coming from her clothes, which Vanraj used to hate. Kavya returns home. She tells Vanraj that her meetings went well. She finds him waiting for Anupama. She lectures him for not valuing her, and instead thinking of Anupama. She feels she did a mistake by marrying him, he never respects his life. She doesn’t want to become another Anupama for him. Vanraj too doesn’t want to feel insecure. He just wants to find out where did Anupama go.

He waits for Anupama at the door like before when he had the egoistic and dominating husband’s rights on her. Anupama returns home and finds Vanraj waiting. She tells that she was with Anuj. He tells that Kavya and he weren’t shameless like her. Hasmukh arrives. He tells Vanraj that Anupama wasn’t alone, he took Anupama to Anuj’s house for a reason. Vanraj asks the reason. Hasmukh asks him to stop the blames, because they have a good news to share. Hasmukh calls the family.

Anupama shows the Bhoomi pujan invite to Leela. She asks Leela not to get upset with her. She wants Leela’s blessings and support. Leela asks Anupama where did she prepare the halwa. Hasmukh tells that Anupama has cooked it in Anuj’s kitchen. Leela refuses to have the sweets. She criticizes Anupama. Leela, Kavya and Vanraj aren’t happy. Leela tears the card and reprimands Anupama. She declares that nobody will attend the puja. Anupama sinks in sorrow. What will Anupama do to convince Leela? Keep reading.

Reviewed Rating for Anupama 3rd October 2021 Written Update Special Epi: 5/5 This rating is solely based on the opinion of the writer. You may post your own take on the show in the comment section below.