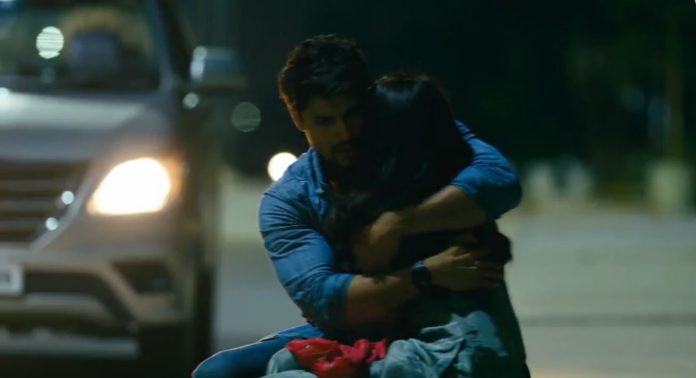 Udaariyaan 4th October 2021 Written Update Tejo accused Jasmin leaks the exam question papers, to put the blame on Tejo, who is a responsible teacher to answer the college committee. Tejo gets accused for the paper leak. Tejo tells the principal that she didn’t leak the question paper. She asks the principal to trust her. The principal reminds that Tejo had set the questions papers, and didn’t share it with anyone yet. She asks who else can leak the papers if not her. She tells that Tejo has given tuition to the students before the exams, many students were rich, she would have sold the question paper for the sake of money. Tejo is devastated by the accusation on her.

Tejo leaves from the college, and breaks down on the way to the home. She doesn’t know what to tell the family, since the accusation will bring a disgrace to them. Fateh looks out for Tejo when she doesn’t return home from the college till late hours. He finds a shattered Tejo lying on the roadside. He finds her at the least expected place. He asks Tejo what happened to her. He hugs her and pacifies her like a friend. He asks her to share the problem with him.

Tejo breaks down and reveals to him about the shocking accusation on her name. She tells that she didn’t leak the question paper. She wants Fateh to trust her. Fateh trusts her. He knows that Tejo can never do wrong. He wants to find out who has framed Tejo and why.

Tejo finds her laptop on. She realizes that someone was using the question papers. She doesn’t pay attention. Jasmin runs away from the room. Tejo tells the family that she will drop Candy home. Gurpreet gets emotional. She wishes Simran had a child. Tejo brings Candy to Simran. Simran tells that Candy may tell anything to the family about her. Tejo knows she is taking a big risk. She tells that Khushbeer will forgive her if he loves Candy. Jasmin rushes to meet Sweety. She tells that she has the question paper to leak. Tejo tells the Principal that she made the papers a bit easy for the sake of students.

Principal tells that students love her, after all Tejo got the best teacher award. Sweety asks Jasmin why did she leak the paper. Jasmin tells that she had put the paper on the internet. Sweety gets worried by her move. Principal talks to Tejo about Jasmin posing personal problems to Tejo. Jasmin tells Sweety that nobody can catch her for leaking the papers. Tejo wants to focus on her work, by forgetting the papers. The Principal tells that she is proud of Tejo. Jasmin wants Tejo to get famous for the wrong reasons. She expects to see Tejo ousted from the house and the college. She goes to the academy to meet Fateh. She hinders his meeting.

He asks Jasmin why does she look so happy. Jasmin doesn’t tell him anything. She tells that they will go shopping. He replies that he has to save money for Canada. He asks her to help him in work. She tells that she wants new clothes for Soni’s engagement. She complains to him. He gives the credit card. He asks her to buy anything she wants, by keeping an eye on the budget. The students are happy that the question paper is leaked. Principal summons Tejo at the college. She rebukes Tejo for leaking the papers. Tejo denies the crime. She tells that she won’t get anything by leaking the papers. Principal accuses her for selling the papers for the sake of money.

Tejo asks her not to accuse her. Principal tells that Tejo’s work will defame their college as well. Tejo pleads her innocence. Principal asks her to resolve the matter in 12 hours. She wants Tejo to save her own respect and also the college name. Jasmin is very happy with the developments. Jasmin wants to celebrate her win. She bakes a cake to impress Fateh and the family. Tejo worries for Khushbeer’s name and respect. She gets shaken up. Jasmin celebrates to defeat her sister and fill her life with tears. Nimmo tells Gurpreet that Jasmin looks very happy, it means she has planned some big thing against them. Gurpreet prays that her family stays protected. Fateh spots Tejo on the roads. He thinks of helping the girl in need.

He is shocked to find Tejo. He calms her down. Jasmin tells the family that she is trying to win their hearts. Fateh asks Tejo why is she crying. Tejo tells him the entire chapter. She tells that she just has 11 hours left. Fateh tells that they will find a way out. He asks her to set the question papers again. He is ready to help her. He tells that he totally trusts her, she will win the battle by her determination and courage. The family waits for Fateh and Tejo.

Fateh encourages Tejo like a friend. Tejo asks him not to hold her hand, because their relation is breaking. She refuses to take his help. He tells her that he will handle everything and save her from the mess. He wants to save Khushbeer’s name and pride by helping Tejo. Jasmin wonders who will save Tejo. Tejo doesn’t want any drama if Jasmin learns about Fateh helping her. Fateh feels its a good way to get rid of his guilt. Tejo permits him to help her. Will they solve the problem and find Jasmin’s truth? Will Fateh and Tejo uncover Jasmin’s evil plan and punish her? Keep reading.

Reviewed Rating for Udaariyaan 4th October 2021 Written Update Tejo accused: 2/5 This rating is solely based on the opinion of the writer. You may post your own take on the show in the comment section below.