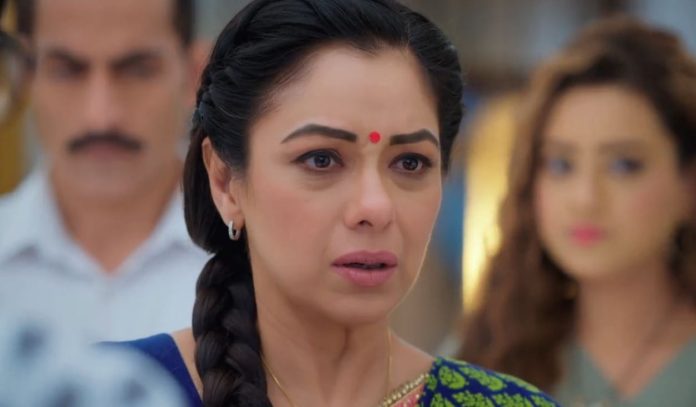 Anupama 4th October 2021 Written Update Bhoomi Pujan Anupama sweetly offers the sweets to Leela. She shows the invite to Leela. Kavya finds the card very expensive. She tells this to Vanraj. Anupama tells that she isn’t doing anything that would leave Leela upset. She wants her family to be with her when she takes the first step towards a new life. Leela learns that Anupama has prepared the halwa in Anuj’s house in his kitchen. She refuses to have the halwa, when Anupama had made it in a stranger’s kitchen. Anupama tries to avoid the arguments. She lets go everything and asks Leela to just accept the invite. She tells that they will be going in the Bhoomi pujan with the entire family.

Leela tears the card and attempts to tear Anupama’s dreams. She asks Anupama if she got everything from Mumbai, and left her shame there. She rebukes Anupama for giving her such a card where Anupama’s name is printed with a stranger. She declares that nobody will be attending the Bhoomi pujan. Anupama gets distressed. She takes the torn card and joins it back. She doesn’t let anyone break down her dreams and hopes. She wants her family to be with her. She just seeks their support, but Leela and Vanraj make it too difficult for her.

Moreover, Anuj understands how difficult it is for Anupama to convince her family, especially when Vanraj is there to spread the dirty thinking around. He doesn’t want any wrong talks about Anupama, which could spoil her day. Anuj awaits Anupama for the Bhoomi pujan, while Leela hinders the latter. What will happen when a twist strikes Anupama again? Keep reading.

Vanraj checks the invitation card. He reads the names of Anupama and Anuj connected, like Anupama Anuj Kapadia. Kavya taunts Anupama for being so lucky. Vanraj berates Anupama for getting involved with Anuj. He tells that Anuj has a dirty sight and intentions. Anupama tells that Vanraj’s thinking is dirty, he didn’t see the And between the names. Vanraj taunts that their names will be connected soon. She knows that he is angry seeing her name printed, which he never let shine till now. She taunts him back for his jealousy. Anupama makes the entire day’s plans and gets too happy, until Leela tears her dreams.

Baa asks Anupama to keep the card away from her. Vanraj snatches the card and says he will see what it is. He reads the invitation by Anupama Anuj Kapadia. This shocks everyone, especially Baa. Kavya puts fuel in the fire saying that Anupama and Anuj’s relationship has reached this level. She also calls Anupama very lucky. Vanraj gets angry and says how dare Anuj publish Anupama’s name on the invitation card. He also says that Anuj’s intentions are so wrong. Anupama gives Vanraj a befitting reply saying that his vision is low. She asks Vanraj can’t he see “and/&” between Anupma and Anuj Kapadia.

Anupama scolds Vanraj saying his thoughts are so low as he repeats the same thing about her and Anuj again and again. Vanraj says that now only names have joined, in future they may get together. Anupama replies that they never came close, even when their names were joined together. She reminds Vanraj that he never published her anime on any card in the past. She tells him that he is angry just seeing her name published, not because her name got published with Anuj. Anupama also says to Vanraj that he is not able to accept her name suddenly coming up, which was hidden behind his name.

She takes the card back from Vanraj. Anupama invites Baa to come with her to the Bhoomi Poojan of her and Anuj’s new 5-star hotel. She tells Baa that she has to wear her new saari and they have to leave at 9 am. She also tells Baa that she will finish all the work till 9 am and they will return hearing Hanuman Ji’s katha. Baa takes the and tears it, hurting Anupama. This satisfies Vanraj’s ego. Kinjal asks Baa why she tore the card, the latter asks the former to shut. Samar too asks the same thing. Mamaji says that his sister does this when she gets irritated. Baa shuts Mamaji too.

She scolds Anupama, says how dare she give her the card on which her name got published with a strange man. Anupama asks why she is angry as business cards have all partners’ names on them. She tells Baa that she will wait for her next morning. Baa asks will she go even after hearing this. Anupama apologizes to Baa and says that she will surely go. Bapuji says to Baa that if Vanraj would have got the same partnership, she would have told the whole neighbourhood. He also tells Baa that she has regarded Anupama as a daughter but never accepted her as a daughter.

Anupama collects the pieces of her card. She again tells Baa that she will wait until next morning at 9 am. Baa orders everyone that nobody will go to pooja next morning. Bapuji, Mamaji and Kinjal say they will go to the pooja with Samar and Pakhi. Mamaji says to Baa that respect can be snatched away just like it is earned. Baa gets angry and asks Mamaji will he tell her what is right and what is wrong. Mamaji replies to her to learn about right and wrong from Anupama. He supports Anupama saying that she never did anything wrong. He says Anupama is doing the right thing.

This shocks Baa and Vanraj. Everyone except Vanraj, Kavya and Baa leaves. Kavya instigates Baa and Vanraj saying that Anuj and Anupama love story is going on fast track. She further says that they may attend Anuj and Anupama’s wedding next week. Vanraj gets angry at Kavya. She further puts the fuel in the fire saying that six of the family members are supporting Anupama. On the other side, Anuj and GK discuss what all would have happened with Anupama. GK asks Anuj to propose to Anupama the next day in the pooja.

He tells Anuj to eat less as he is getting fat. Anuj wonders if he has started looking fat? He praises food made by Anupama and says that he cannot stop. GK tells him that a happy man is one who gets fat eating the food made by wife. He tells Anuj that eating excess food made by wife is a good thing and an indication of a happy man. Anuj asks really. He says he is feeling happy and satisfied these days. GK says if Anupama is present, then there is happiness, satisfaction and smile. Anuj thinks that he is happy, not Anupama. He hopes that Anupama is smiling.

On the other hand, Anupama joins all the pieces of her torn card. She gives herself the strength saying that her journey is seeming difficult as its new, she will get habitual of it. She also thinks that everything will get better soon. Next morning, Devika and GK tease Anuj with Anupama’s name indirectly. They tease him further saying that they can see his happiness. He requests them to not create any mess in front of Shahs. They promised they will not create any mess. They joke with Anuj taking Anupama’s name. Anupama arrives with her family. Anuj feels mesmerized by Anupama’s arrival. He thinks of a lovely shayari. Anupama and shahs meet everyone present at Anuj’s house.

Pakhi says that Anupama and Anuj have worn the same colored clothes. Anupama too gets surprised. Anuj shows Anupama the map of their project. They look cute while talking and “Tumse Mila” song from the film Tere Naam plays in the background. He asks Anupama for a selfie. Anuj says that the media wants it. Anupama permits him to do it. Anupama praises the selfie and she asks him to send it to Samar. At Shah house Kavya again tries to fuel Baa and Vanraj’s anger by speaking against Anupama using Rakhi Dave’s name. Vanraj asks Kavya to not take Rakhi’s name in the house.

Baa worries thinking of seeing Anupama and Anuj’s name together. Kavya says their name will come in the news too. Baa asks Vanraj to do something. Vanraj asks Baa, what can he do. A courier arrives at Shah house. Vanraj receives it and gets angry. He says the person should have done this. In the pooja, Anuj asks Samar what happened? Samar hugs Anuj. He thanks Anuj for giving respect to his mother (Anupama). Anuj says his mother was too important to him. Samar further thanks Anuj for fulfilling Anupama’s dream by giving her the opportunity. Anuj says it’s all Anupama’s efforts, she is fulfilling her dreams.

In the next episode, Anuj and Anupama put their hand prints using sindoor together on a paper. Panditji says that they will have to be together in every happiness and sorrow related to business. The paper flies and ruins Vanraj’s shirt. This angers Vanraj. Kavya hopes Vanraj doesn’t create any drama.

Reviewed Rating for Anupama 4th October 2021 Written Update Bhoomi Pujan: 3/5 This rating is solely based on the opinion of the writer. You may post your own take on the show in the comment section below.