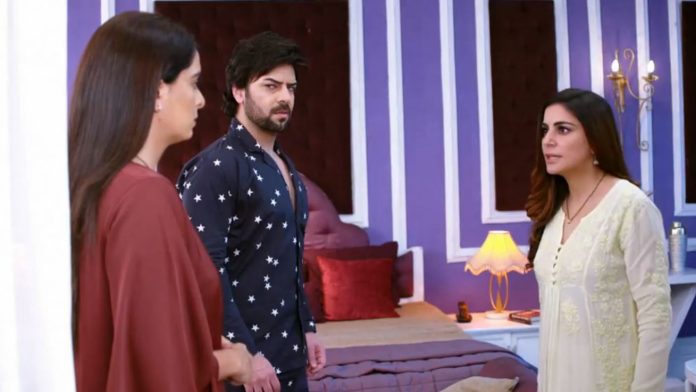 Kundali Bhagya 4th October 2021 Written Update Prithvi Sherlyn caught Prithvi gets attracted towards Sherlyn. He finds ways to reach Sherlyn and spend time. He tells Rakhi that he wants to help her, because he is also like her son. Kritika is impressed by him, while he signs romantic gestures towards Sherlyn. Karan and Rishabh get ready to go for a business meeting. Karan tells that he isn’t happy to do office work. Sameer tells that the foreign investors will come on time, they have to be there. Karan asks Preeta to wait for him, even if he gets late. He informs Mahesh about the tampered accounts. Rishabh asks Karan not to give any tension to Mahesh.

Sameer and Rishabh tell that they are trying to find out who did the fraud. Preeta suggests them to investigate more, if any new person joined the company. She tells that new person would be behind the scam. Kareena asks her not to give her opinion in the business, if she has no knowledge. Rishabh tells that Preeta’s idea is wonderful, she is right, they will find out the new recruit. Karan jokes that Preeta turned smart by staying with him. Sameer tells that she is smart as ever, she is a doctor, she is happy like before.

Karan asks Rishabh not to praise Preeta. The brothers leave for the meeting. Sherlyn finds Prithvi much tensed. Preeta finds Prithvi and Sherlyn signalling each other. Preeta goes and takes care of Pihu, who wants to sleep in the toy room. Preeta asks her to drink the milk first. Rishabh and Karan are with the clients for the dinner meeting.

Rishabh tells that he will call Sherlyn and inform that he will be late. Karan tells that he will also call Preeta. Rishabh loves Karan as his kid. Kritika gets a headache. Prithvi doesn’t want Rishabh to find out his plans. He thinks to fool Kritika by his charming side, so that Kritika believes her when her brothers expose his truth. He wants at least Kritika to trust her. Preeta finds Prithvi taking care of Kritika. She is glad thinking he is changing. She finds Prithvi and Kritika as a happy couple. She wishes Kritika’s happiness.

Kritika enjoys the head massage and falls asleep. Sherlyn doesn’t answer Rishabh’s call. She prepares to meet Prithvi. Rishabh thinks why isn’t Sherlyn answering. He gets scared by Karan’s kiddish ways. Karan finds Rishabh caring for Sherlyn a lot, and being a good husband. Karan tells that he is also a good husband because of Preeta. He calls up Preeta to inform that he will be late. Prithvi meets Sherlyn in her room to spend romantic time in Rishabh’s absence. He tells her that his life was going smooth, but Rishabh is troubling him.

He tells that he misses her a lot. She likes his madness for her. Karan and Preeta argue on the call. Karan tells her that Rishabh loves Sherlyn. Rishabh tells tha its nothing such, he was just calling Sherlyn wth concern. Preeta tells that she will be glad if Rishabh gets love in his life, he is really sweet. Rishabh asks her to inform Sherlyn that he will get later. Preeta goes to tell Sherlyn that Rishabh loves her. Prithvi tells that time will change soon. Sherlyn wants to get rid of Rishabh. He tells that they will soon reach their goals and destroy Luthras. She adds that Luthras will get a big shock then.

He asks her to trust him, he will not spare the Luthras. She kisses him. She wants him to always be happy. Preeta reaches the room. She overhears Prithvi and Sherlyn’s romantic conversation. Sherlyn share a hug, which breaks because of Preeta. Preeta is shocked to find them romancing. She rebukes them for their disgusting affair, that they are cheating their partners. She tells that she had overheard their talks. She lectures them for being so shameless to carry on their disgusting affair. She suspects Prithvi’s intentions behind faking concern for Kritika. What will Preeta do now? Keep reading.

Reviewed Rating for Kundali Bhagya 4th October 2021 Written Update Prithvi Sherlyn caught: 3/5 This rating is solely based on the opinion of the writer. You may post your own take on the show in the comment section below.